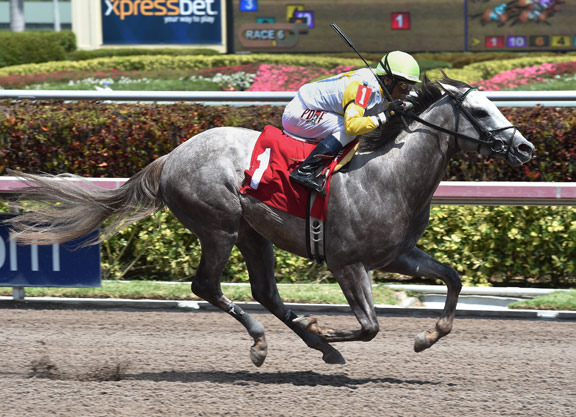 Time to Travel | A. Coglianese

Time to Travel (Hard Spun) checked in a decent fourth behind well-regarded Chad Brown trainee Timeline (Hard Spun) over track and trip Mar. 4. He was one spot adrift of Fayeq (Malibu Moon–Lotta Kim) and two ahead of Caviar Czar (Ire) (Medaglia d'Oro), but was dismissed at 13-1 compared to those two rivals' respective 5-2 and 5-1 odds for higher profile connections. Showing good natural speed to seize command from the rail without requiring much pressure, the grey doled out splits of :22.79 and :45.79 with his pursuers seemingly pushed on much harder to keep up. The Garland Williamson homebred took the turn into the stretch very wide, but he was kept to task by rider Edgar Prado and righted the ship en route to a convincing 4 3/4-length success. Caviar Czar was second and Fayeq was fourth. Meantime (Shackleford), a half-brother to MGISW Sweet Reason (Street Sense) who was second to GII Louisiana Derby contestant Patch (Union Rags) at 53-1 odds Feb. 18, settled for third at 4-5 after chasing the pace out wide.

Time to Travel is a full-brother to Hard Not to Like, who annexed the 2014 GI Jenny Wiley S. for Williamson and trainer Michael Matz. Peter Fluor and K. C. Weiner of Speedway Stables paid $1.5 million for Hard Not to Like at the 2014 Keeneland November sale, and she added the following year's GI Gamely S. and GI Diana S. to her resume under the tutelage of Christophe Clement. She subsequently topped a session of KEENOV '15 thanks to a $2.2-million winning bid from Tom Ryan's DATTT Farm.

Time to Travel's dam was a talented runner in her own right. Like a Gem's victories at Woodbine for Williamson's Hillsbrook Farms included a 48-1 upset of the 2006 Wonder Where S. She RNA'd for $350,000 at the 2008 Keeneland November sale while carrying Hard Not to Like. The 14-year-old mare's most recent produce is a yearling filly by Speightstown.