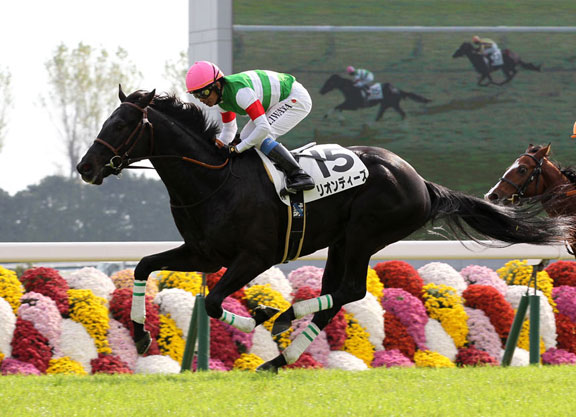 Leontes (Jpn) (King Kamehameha {Jpn}) unleashed a powerful run that took him from last to first to win the G1 Asahi Hai Futurity and stake his claim for champion 2-year-old honors. The half-brother to G1 Japan Cup winner Epiphaneia (Jpn) (Symboli Kris S) came wide around the whole field under Mirco Demuro and when he joined the favorite Air Spinel (Jpn) (King Kamehameha {Jpn}) half a furlong out his momentum carried him three parts of a length clear of the classy runner up, the pair a full four lengths ahead of Shadow Approach (Jpn) (Jungle Pocket {Jpn}). It was only Leontes's second career start, he turned in an impressive maiden win Nov. 22 and given the wide course he charted throughout the running Sunday, he could be value for more than the winning margin. The runner-up looked the likely winner two furlongs out as he strode away from the field under minimal riding, but he could not match the winner's late surge. The jubilant rider, winning his fourth Group 1 of the year commented, “I had been told that this colt was powerful and he certainly showed that when I rode him in training on Wednesday—he was pretty keen but smart and an honest colt. It was his first time over a mile but he responded and really stretched well on the outside. He's got a lot to look forward to in his 3-year-old season. This really has been a great year for me.”