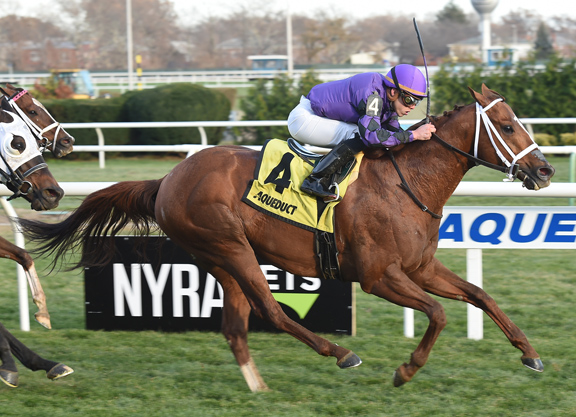 When the pre-entries were announced for this year's Breeders' Cup, the presence of Rainbow Heir (Wildcat Heir) went largely ignored. That wasn't exactly a surprise since he'll go in one of the less glamorous races on the Saturday card, the GI Breeders' Cup Turf Sprint, and he's never even run in a Grade I race.

But what many probably did not know is that he is a racing oddity, a horse that has returned to run in the Breeders' Cup after standing a successful season at stud.

The 8-year-old New Jersey-bred appeared to have ended his racing career on a good note. He was retired after winning the Jan. 27 Gulfstream Park Turf Sprint. He recorded a career high 106 Beyer figure that day in what was his second straight stakes win for the owner, Eb Novak's New Farm and trainer Jason Servis.

His stud fee was set at $3,500 and he went to Ocala Stud in Florida. According to Novak, he was bred to “about 40 mares.” There were no set plans to bring Rainbow Heir back to the races, but Novak never forgot a conversation he had with Servis the year before.

“I wanted to run him in the Breeders' Cup at Del Mar last year,” Servis said. “Ebby didn't want to do it and said we were going to run him at Gulfstream and then get ready to retire him instead. I told him, 'You've got to be kidding; this horse has all these 100-plus Beyer numbers and he's never been doing better.' I guess he got tired of all my whining, so he made me a deal. He said that if we sent him to stud and he was doing well afterward, he'd give me the chance to run him in the Breeders' Cup this year.”

Back in training, they brought him along slowly and he passed every test.

Servis had Rainbow Heir ready ro run in the Sept. 3 GII Turf Monster at Parx, where he ran third, beaten three-quarters of a length with Trevor McCarthy aboard. His Beyer number declined to a 96, but Novak said that the race was better than it looks on paper.

“He should have won that race,” Novak said. “He was blocked in and had to go around all those horses. The rider didn't have him in a good spot. He pulled him back and he came running and we lost the race by less than a length. He was flying at the end. Jason was really pleased. He said after it was over, 'He's in great shape, he's doing good, let's go for the Breeders' Cup.'”

Novak understands that he is making an unconventional move and also acknowledges that this could not be done with just any horse. In Rainbow Heir, he believes he has the horse with the demeanor to pull this off.

“He's a very calm, controlled horse,” Novak said. “I'm not saying you could ride him next to a broodmare and he wouldn't get excited, but he's not a high-strung, hard horse to handle. He's a very intelligent horse. I've had studs that were nuts. Once they start breeding their heads go crazy and that's all they can think of. They're like guys at a bar. This horse isn't like that at all.”

Said Servis: “You see this horse now, you'd have no idea he was bred to 40 mares.”

Novak, 80, has been a fixture in New Jersey racing for decades. He said he grew up wanting to be a cowboy, but instead, at age 23, started Unique Industries, a global party supply manufacturing company. His roots, when it come to Rainbow Heir, run deep. Novak campaigned his grandsire Forest Wildcat (Storm Cat), a multiple Grade III winner. Forest Wildcat is the sire of Wildcat Heir (Forest Wildcat), the winner of the 2004 GI DeFrancis Memorial Dash and another horse who ran under Novak's purple colors. As a sire, Wildcat Heir kept things rolling, producing, among others, Rainbow Heir.

What Novak is doing is not a first. There are no records available when it comes to horses that went to stud only to return for the Breeders' Cup, but at least one prominent horse does come to mind. Bertrando (Skywalker) began his stud career in 1994 and was brought back after the breeding season. He was the champion older male in 1993 and ran second that year in the GI Breeders' Cup Classic. After stud duty, he did win the GII Goodwood, but was but two for eight overall and finished sixth in the 1994 Classic.

As long as his stint as a stud has not affected his ability to run, Rainbow Heir looks like a legitimate contender in the Turf Sprint. Disco Partner (Disco Rico) is the only horse in the prospective field with a higher lifetime Beyer number on the grass.

“I wouldn't be the least bit shocked if he were to win,” Servis said. “He's got seven Beyer numbers over 100 and I've got the leading rider [Jose Ortiz] in the country on him. This horse is very live.”

Novak said this will definitely be Rainbow Heir's last race. A victory, he said, would result in an increase to his stud fee.

“I've been very fortunate in my business,” he said. “I live well and will live well no matter what he does in this race. I know I'm taking a chance. You take a chance any time you run a horse. Why not give him this opportunity? He deserves it.”

Cot Campbell, who passed away Saturday at age 91, will be remembered for many things. His Dogwood Stable won Triple Crown races with Palace Malice (Curlin) and Summer Squall (Storm Bird) and it owned 1996 champion 2-year-old filly Storm Song (Summer Squall). But more so than anything else he was an innovator who changed the sport for the better. It seems inconceivable now, but there was no such thing as race horse partnership groups before Campbell came along in 1969 and started syndicating horses and then created Dogwood. Dogwood was the first of its kind and launched the numerous partnerships groups that now are such a big part of the sport.

Perhaps someone else would have come around eventually with the same idea, but Campbell was the one who started it all. With partnerships now such a prominent part of the sport, he is directly and indirectly responsible for getting thousands of people into ownership that otherwise may have not done so.

Campbell was also one to always take a chance with someone he thought was an up-and-coming star in the trainers ranks.

“He gave a lot of young trainers over the years an opportunity and a chance to prove themselves,” said Todd Pletcher, who trained Palace Malice.

Pletcher, no doubt, would have been a success without Campbell's help, but Dogwood certainly gave him a boost. When he went out on his own in 1996 Dogwood was among the first major owners to give him quality horses.

Trainers Who've Been There From Day One

It was 34 years ago when the inaugural Breeders' Cup was run at Hollywood Park. Chad Brown was five years old on that day.

No jockeys that rode on the inaugural card will ride in this year's Breeders' Cup, but three trainers who participated that day will take part this year. They are Wayne Lukas, Richard Mandella and John Gosden. With Gosden having the likely favorite in the GI Breeders' Cup Turf in Enable (Nathaniel {Ire}) and Classic starter Roaring Lion (Kitten's Joy), he very well could accomplish the rare feat of having won in the first Breeders' Cup, with Royal Heroine, and the most recent edition.