Week in Review: Off-Lasix 3YOs Have Now Won 25% of This Year's Derby Preps 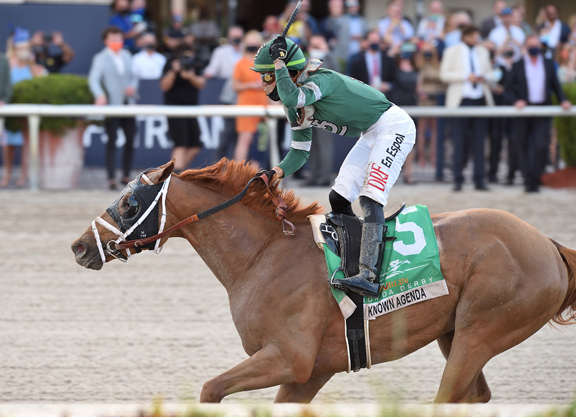 Besides solidifying his status as a top-tier Triple Crown threat, Saturday's win by Known Agenda (Curlin) in the GI Curlin Florida Derby bolstered the overall case that the phase-out of Lasix in this year's series of GI Kentucky Derby preps seems to be having no adverse effect on performance.

Through 20 races in North America since Jan. 1 that have awarded Derby qualifying points, horses giving up Lasix after receiving it in their prior start have won five of those races. Seven others have finished second, an impressive strike rate that equates to off-Lasix horses running first or second in 60% of those 20 stakes.

The sample–admittedly small, but growing–is comprised of 52 total starters. The winners were Known Agenda in the Florida Derby, Helium (Ironicus) in the GII Tampa Bay Derby, Candy Man Rocket (Candy Ride {Arg}) in the GIII Sam F. Davis S., Hush of a Storm (Creative Cause) in the John Battaglia Memorial S., and Capo Kane (Street Sense) in the Jerome S.

It should also be noted with an asterisk that Concert Tour (Street Sense) won the GII San Vicente S. coming off Lasix, but that key Santa Anita prep race does not award Derby qualifying points.

This year will mark the first season in which all three Triple Crown races will be conducted Lasix-free, and the majority of prep stakes for the Derby did not permit Lasix. (In the qualifying races that did permit Lasix, like the Springboard Mile S. back in December, horses could not earn points for their placings if they ran on the drug.)

Known Agenda began his career Lasix-free as a 2-year-old in New York, and he beat highly rated Greatest Honour (Tapit) back in November without the use of any race-day anti-bleeding medication. But his form slipped after that–he ran third, beaten nine lengths, in the GII Remsen S., then was the beaten favorite when fifth in the Davis S. at Tampa.

For a Feb. 26 allowance confidence-builder at Gulfstream, trainer Todd Pletcher added both blinkers and Lasix (which is permitted in non-stakes races for 3-year-olds in Florida). Known Agenda attacked with metronomic precision, then poured it on in deep stretch to win by 11 commanding lengths. The drop in class, the addition of blinkers, and the use of Lasix for the first time all likely contributed to a vastly improved performance. But it was impossible to tease out which of those factors had the most impact.

Conventional handicapping wisdom shaped by decades of Lasix usage in North American racing suggested that coming off of Lasix while stepping up to Grade I company after an allowance win by double-digit lengths the first time on that drug might not be an advantageous angle.

But as we are now seeing, convention might as well get tossed out the window, because these off-Lasix horses as an aggregate don't seem to be suffering marked declines in performance.

Known Agenda improved to a career-best Beyer Speed Figure of 94, a leap of 12 points. Four of the other off-Lasix sophomore stakes winners mentioned above also improved their Beyers when foregoing Lasix: Hush of a Storm (+12), Capo Kane (+10), Helium (+9) and Concert Tour (+6). The only off-Lasix winner to decline in terms of Beyers was Candy Man Rocket (-2).

In the interest of fairness, four other Florida Derby starters on Saturday came off Lasix after using it last time out. They ran second, fifth, sixth and ninth. So yes, for some of those horses the negative performance implications of not racing on Lasix might have been more pronounced.

Prior to the entire field not racing on Lasix on Saturday, you have to go all the way back to 2012 to find the last time a Florida Derby entrant didn't race on Lasix (Reveron, beaten just a length at 31-1 odds). Before that only one other horse in the 21st Century ran Lasix-free in the Florida Derby (an off-the-board long shot in 2001).

And we'll wrap up this discussion with a little quiz: Prior to Known Agenda, can you name the last horse to cross the Florida Derby finish wire first while running Lasix-free?

The answer is Lil's Lad in the 1998 edition. He was the only horse in that year's Florida Derby not racing on Lasix, but he got disqualified from the victory for causing interference.