Week in Review: Is Classic Best Fit for Life Is Good? 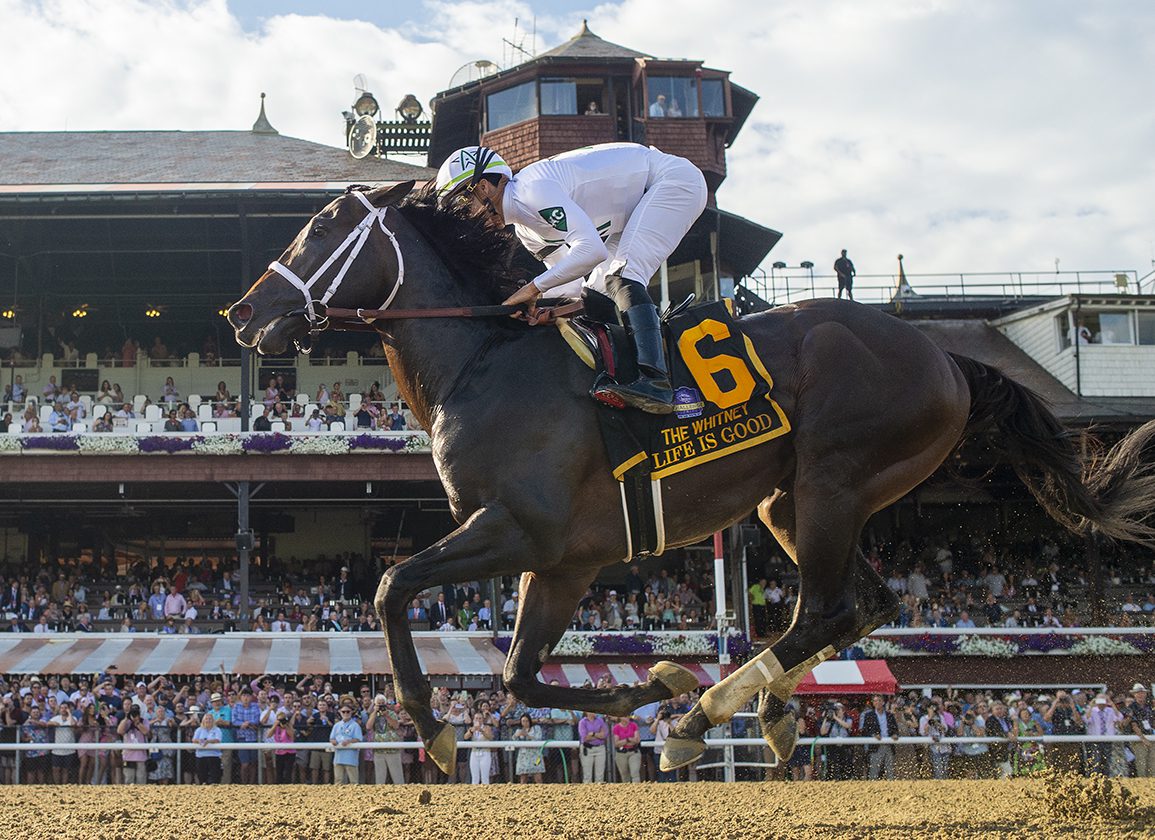 'TDN Rising Star' Life Is Good (Into Mischief) got the job done Saturday in the GI Whitney S. at Saratoga, which probably means that a start in the GI Breeders' Cup Classic is on his schedule. The Whitney was a “Win and You're In” race for the Classic and has traditionally been one of the most important preps for the season-ending $6-million race. If trainer Todd Pletcher and owners WinStar Farm and the China Horse Club play this one by the book, the Classic is where they will end up.

But is that the best Breeders' Cup race for him?

After his performance in the nine-furlong Whitney, where he didn't quite deliver the type of spectacular performance he is capable of, it's a fair question to ask. The Classic is run at a mile-and-a-quarter and it's pretty clear than 10 furlongs is not Life Is Good's best distance. He'll have a lot easier time winning the GI Breeders' Cup Dirt Mile, the race he won last year, than the Classic.

Life Is Good has tried a 1 1/4 miles only once, in the G1 Dubai World Cup, and the result was, perhaps, the most disappointing race of his career. He had the lead until about 100 yards before the wire only to be passed by three horses. Pletcher has pointed out that the racing surface at Meydan was deep and tiring and said that worked against Life Is Good. That may be true, but with a horse with this much talent, he should have found a way to pull off the win. More so than the condition of the racetrack, the distance got him.

His first start after Dubai came in the GII John A. Nerud S. at seven furlongs and he thrashed a good horse in Speaker's Corner (Street Sense) to win easily. That seemed to set him up perfectly for the Whitney, where the competition included Olympiad (Speightstown) and three others. It's not that Life Is Good ran a bad race, or anything close to it. He won by two lengths and got a 107 Beyer. It was a good effort, some have said it was gutsy and that he showed heart. After getting loose on the lead, he had to fight off stablemate Happy Saver (Super Saver) to grind out the win. But, as brilliant as Life Is Good had been in some of his earlier starts, we expected something more than gutsy.

It also matters that Olympiad, who had been so consistent, winning five straight, picked this day not to show up. That meant the competition Life Is Good faced wasn't as strong as had been expected.

Winning a $1-million, Grade I race in Saratoga is no easy feat, but this didn't look like Life Is Good at his best, and the distance probably had something to do with that.

In some years, maybe Life Is Good could overcome distance limitations and win the Classic. But this year's field will be loaded. At a mile-and-a-quarter, can he beat Flightline (Tapit) or Epicenter (Not This Time)? Then there's Country Grammer (Tonalist), who finished ahead of him in the Dubai World Cup and is partially owned by WinStar.

Passing on the Classic isn't exactly a no-brainer. It's worth $4 million more than the $1-million Dirt Mile and if they don't run there they may cost themselves any chance at being named Horse of the Year.  It's a race everyone wants to win and looks great on the record of a future stallion. But if you want to pick the race that is the best fit for Life Is Good and the one where he has the best chance of winning, that's an easy call. It's the Dirt Mile.

The Future of Belmont Park

On this week's TDN Writers' Room presented by Keeneland, NYRA CEO and President Dave O'Rourke said that NYRA's long-range plan is likely to include shutting down Aqueduct and running at Belmont in the winter. That's one of the reasons NYRA is planning on installing a synthetic Tapeta surface at Belmont. It also looks like stands will be torn down and replaced with a smaller facility.

O'Rourke also said there are no plans to change the current circumferences of the tracks, meaning the main track at Belmont will remain the massive mile-and-a-half oval that it is. Buy why? The 12-furlong track works for one race, the GI Belmont S. For every other race, it's simply too big, it's impractical and the sight lines are not good. It also means that any 1 1/4-mile dirt races, like the Breeders' Cup Classic, have to start on the clubhouse turn. A nine-furlong main track, which they have at Aqueduct ands Saratoga, makes more sense.

Fillies Dominate the Hall of Fame

Two horses from the modern era were inducted this week into the National Museum of Racing Hall of Fame and, in Tepin (Bernstein) and Beholder (Henny Hughes), both were fillies. That's no coincidence. Since 2015, six fillies have made the Hall of Fame and only three male horses: American Pharoah (Pioneerof the Nile), Lava Man (Slew City Slew) and Wise Dan (Wiseman's Ferry). The latter two are geldings.

In an era where star males horses who are not geldings will almost always call it quits after their 3-year-old seasons and maybe run nine or 10 times in their careers, you're not going to get many who have Hall of Fame credentials. Justify (Scat Daddy), who raced just six times, is one of the few exceptions, but only because it would be awful hard to keep a Triple Crown winner out of the Hall of Fame. Otherwise, the voters will be hard pressed to put a horse into the Hall of Fame who raced just two years and made a limited number of starts.

Fillies are a different matter. With a top broodmare being worth considerably less than a top sire, it makes economic sense to continue to race them. Beholder ran 26 times and raced at six. Tepin retired after her 5-year-old campaign and made 23 starts.

Zenyatta (Street Cry {Ire}) ran 20 times and was still out there at age six. Rachel Alexandra (Medaglia d'Oro) raced 19 times and stuck around through her 4-year-old year. With top male horses, those are numbers you don't see anymore.