Week in Review: Faves Fail to Show on Saturday, but Excuses Abound 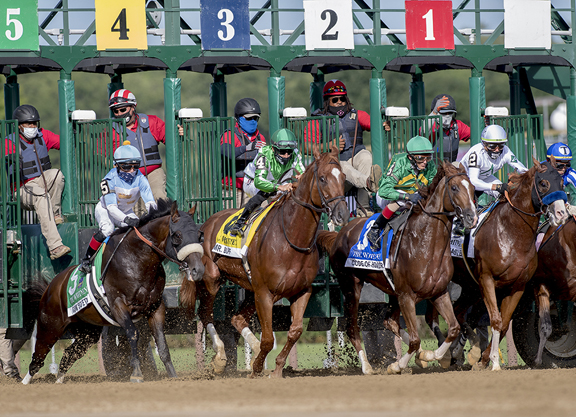 This past Saturday wasn’t a great day to be a favorite in an open stakes race at the nation’s premier race meets. Chalk horses went a collective one-for-seven at Saratoga and Del Mar, and the list of excuses included stutter-step starts, bumps leaving the gate, stretch-run roughhousing, getting disqualified, and being dueled into defeat in internal pace battles.

Tight finishes in several stakes elevated the interest level, although the results in general did not lend clarity to the nationwide divisional races with the GI Kentucky Derby inside the five-week mark and the Breeders’ Cup Championships now three months out.

At the Spa, faves went zero-for-five, with the GI Personal Ensign S. setting the tone early in the day. The 9-1 Vexatious (Giant’s Causeway), who hadn’t won since scoring in a 1 3/8 miles turf stakes at Del Mar two summers ago, ran the race of her life at age six while attending the pace over nine furlongs on dirt. She got first run on a tiring speedster, then braced for the onslaught of heavy favorite Midnight Bisou (Midnight Lute). Last year’s distaff champ looked like she’d inhale the determined bay, but Vexatious dug in for a spirited fight, shifting outward and exchanging bumps in deep stretch before prevailing by a neck and surviving a foul claim and inquiry.

The win was a first Grade I triumph for both Vexatious and trainer Jack Sisterson, who also picked up his first career win at Saratoga in the Personal Ensign. Vexatious earned an automatic entry to the GI Breeders’ Cup Distaff Nov. 7 at Keeneland, where Sisterson is primarily based.

In the nine-furlong GI Whitney S., the 3-1 Improbable (City Zip), who has a history of getting hot and bothered in the starting gate, held up the start. The Bob Baffert trainee eventually settled down, but the delay might have contributed to the unraveling of even-money favorite Tom’s d’Etat (Smart Strike), who missed the break and came out four lengths behind the field. This altered the pace complexion of the Whitney, leaving 29-1 long shot Mr. Buff (Friend or Foe) sailing solo on the lead through soft splits with Improbable tracking in second and Tom’s d’Etat relegated to the back of the pack.

Improbable, on his way to a 106 Beyer Speed Figure, swatted away Mr. Buff at will on the far turn, opening up by two lengths in the stretch under steady urging. By My Standards (Goldencents) picked up the pieces in second. Tom’s d’Etat checked in third, ending his four-race winning streak, but with an asterisk attached because of his trip woes.

The 7-1 upset by Echo Town (Speightstown) in the seven-furlong GI H. Allen Jerkens S. Presented by Runhappy didn’t at all seem fluky despite another favorite–the 2-1 No Parole (Violence)–faltering. The Jerkens was a deep 11-horse affair, and Echo Town broke with alacrity and was initially within three lengths of a hotly contested lead. But he settled nicely at the tail of the main flight on the inside, then edged outward for clear passage, commencing a rally a half-mile out that quickly picked off most of the pack.

The leaders lined up four across the track at the sixteenth pole, but Echo Town’s widest bid included a deep-stretch resurgence that none of his peers could match, and the Steve Asmussen trainee ended up drilling a pretty good bunch of 3-year-old sprinters by 3 1/2 lengths.

Shifting, drifting, bumping, and grinding through the final furlong of the GII Bowling Green S. at 11 furlongs on the turf affected five of the six starters, and the stewards placed the blame on Sadler’s Joy (Kitten’s Joy), who was DQ’d from his neck win and placed fourth. New York-bred Cross Border (English Channel) was elevated to victory after crossing the wire second. The result could portend a nice August start at the Spa for New York-breds, as fellow state-bred Tiz the Law (Constitution) figures to start heavily favored in this Saturday’s GI Runhappy Travers S.

In the nightcap, 4-1 Cariba (Cairo Prince), completed the stakes blanking of Spa faves with a half-length tally in the Caress S. over 5 1/2 furlongs on the lawn.

Honor A. P. (Honor Code) looked flat and unmotivated when checking in second at 1-5 odds in the Shared Belief S. at Del Mar. But even before he encountered trip trouble on the track, the pre-race vibe signaled that this could be a “trap” race for the top West Coast candidate for the Kentucky Derby.

Honor A. P., who previously performed like a more-distance-the-better type of 3-year-old, was cutting back half a furlong to 1 1/16 miles from his GI Runhappy Santa Anita Derby score on June 6, and the dynamics of the four-horse Shared Belief meant that the ridgling would have be closer to the pace than was ideal for his running style. It didn’t help that Cezanne (Curlin) swerved directly into him at the gate break, and jockey Mike Smith (as he often does aboard odds-on favorites in route races) guided Honor A. P. to the back and outside of trouble, even though this meant giving up three paths of real estate into the clubhouse bend.

Thousand Words (Pioneerof the Nile), meanwhile, broke fluidly and settled in at the fence to be the 9-1 pacemaker. Entering the backstretch, Honor A. P. advanced under his own power to shadow the speed a half-length back, but Cezanne again became a pesky presence about a half mile out when he pushed up from between rivals to claim second, causing Honor A. P. to lose a position while edging outward again for another three-deep journey through the far turn.

Cezanne narrowly led off the bend, but Thousand Words punched back under urging at the rail while Honor A. P. couldn’t gain any traction on the outside. Honor A. P. re-engaged late to finish second, three-quarters of a length behind Thousand Words. But his resurgence had more to do with Cezanne backpedaling out of the picture than it did with Honor A. P. finding that unmatchable late gear he displayed in his Santa Anita Derby win.

In the aftermath of the Shared Belief, Thousand Words (104 Beyer) has regained some of his early-season luster after the Bob Baffert trainee fell off the Derby radar for a stretch between March and June. But Honor A. P. is likely to emerge as the more dangerous threat heading to Louisville, because trainer John Shirreffs didn’t have him fully cranked for his final Derby prep, and nothing about his taxing trip worked in his favor.

Later on the card, the 19-10 Collusion Illusion (Twirling Candy) emerged as the lone unscathed favorite on Saturday’s slate of national stakes, rallying from out of the clouds (or out of the Del Mar fog, to be more precise) to nail a GI Bing Crosby S. photo-finish win by a nose after patiently watching a six-way scramble for the lead disintegrate. The Mark Glatt trainee was the lone 3-year-old in the six-furlong field of nine.

During the same earnings conference call last Thursday in which Churchill Downs, Inc. (CDI) chief executive officer Bill Carstanjen detailed long-term plans for the gaming corporation’s desire to rid itself of Arlington International Racecourse, Carstanjen also provided an update to the redevelopment of Turfway Park and its “extension” betting facility a dozen miles to the northeast in Newport, Kentucky, that will be generating purse money for the track’s Dec. 2-31 holiday meet.

“We finished demolishing the existing grandstand at Turfway Park in the second quarter, and the racetrack itself with a new state-of-the-art artificial racing surface called Tapeta will be completed by the end of August,” Carstanjen said. “During the second quarter, we completed the architectural design and site development plans. We will begin construction of the new horse racing machine (HRM) and grandstand facility as soon as we obtain the required permits and complete the necessary site improvements. The updated design reflects a floor plan of approximately 155,000 square feet and includes a simulcast facility, a racing grandstand and event space for groups and banquets, racehorse owner and VIP player accommodations; 44,500 square feet of gaming floor that can accommodate up to 1,200 HRMs, and three food and beverage venues, including a sports bar designed to accommodate sports wagering in the event it is approved in Kentucky.

“Based on the finalization of the design for the facility, total project capital for Turfway Park is projected to be approximately $200 million, which includes the Turfway Park acquisition costs and other previously approved capital. This capital investment will be completed over the next 15 to 18 months. The increase of approximately $45 million over previously provided estimates is primarily driven by increased site work requirements and a larger racing and gaming facility. Our team completed an additional analysis of the Northern Kentucky market and believes that the market demographics and competitive landscape can clearly support this level of investment and will generate a strong return on capital for our shareholders.

“With respect to our Turfway Park extension in Newport, Kentucky, we’ve made excellent progress on this project. Our team has completed all of the site work and the structural improvements needed to the building. We anticipate that the additional interior construction will be completed by the end of September in preparation for a grand opening [with up to 500 HRMs] by early October. This timing will provide two months of operations to generate much needed purse money for Turfway Park’s December live Thoroughbred race meet.”