Week in Review: Could Less be More in Race Officiating? 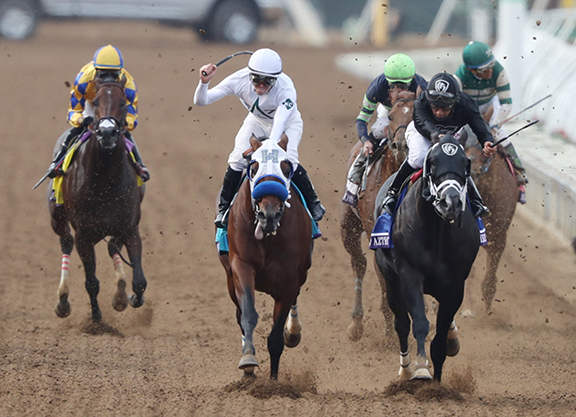 There are quite a few jobs at the racetrack that can be summed up under the general catchphrase “no one really understands what you do until you screw up.” Topping this list are stewards, who are tasked with myriad responsibilities that extend far beyond officiating the races.

I had the opportunity the other day to explain to a non-racing sports fan how objections, inquiries, and disqualifications are adjudicated. This led to a sideways discussion about how racing is unique from major team sports in that 1) Its officials are often recruited from among the ranks of former participants (i.e., jockeys and trainers), and 2) How stewards frequently have to rule on cases that have nothing to do with the actual running of horse races, and/or on matters that routinely end up contested in courts of law.

Yet the in-race officiating will always be the part of the job that draws the most scrutiny and criticism. It should, because it’s the most public-facing aspect of what stewards do.

If the sport is to get serious about improving what racing’s three-person boards of “referees” do on a daily basis, a simple solution exists: Reassign some of the more bureaucratic, behind-the-scenes tasks to other functionaries and specialists while at the same time requiring stewards to be more accountable and transparent about their judging of the on-track action.

Peruse the list of rulings at any given track and it will become readily apparent how much mind-numbing time North American stewards have to devote to policing relatively minor infractions: Fining backstretch workers for smoking under the shed row, parking in restricted areas, cussing at security officers, and (my favorite) “conduct unbecoming of a pony person” are among the more repetitive tasks that make up the daily grind before stewards are expected to competently judge races.

Increasingly, stewards are now responsible for settling wide-ranging financial disputes between licensees. And they sometimes appear well outside their areas of expertise when attempting to fashion violation rulings that can withstand rigorous legal challenge from specialized defense attorneys.

Racing likes to compare itself to major-league baseball, football, basketball, and hockey. But in no other major sport are the game officials required to rule on matters so far beyond the lines of play. Referees and umpires of team sports are paid far better and have far more narrow job descriptions than racetrack stewards. But they are also expected to meet much higher standards of job performance and are subjected to multiple levels of internal review.

The California Horse Racing Board (CHRB) is unique among North American racing jurisdictions regarding the amount of online information it makes available to the public in easy-to-access formats. The detailed minutes of the stewards assigned to Del Mar Thoroughbred Club that were posted on the CHRB website last week provide an interesting glimpse into the minutiae that the stewards had to endure prior to officiating the world championships of Thoroughbred racing.

For example, just before the Friday Breeders’ Cup races, the stewards held abbreviated office hours because of the impending big event. Yet, the minutes reveal, they still had to deal with a report of a valet in the jockeys’ room who allegedly shoved, poked, and dumped a cup of water on the clerk of scales.

The valet was relieved of his duties, then subsequently dismissed by Del Mar. But is this the sort of thing stewards need to be distracted by just prior to a series of multi-million dollar Grade I championships? Can you imagine if the National Football League required its on-field officials to adjudicate a similar locker room dispute just before kickoff of the Super Bowl?

A few days later, the Del Mar stewards had to intervene in a complaint over a $22,684.92 debt involving horses not stabled at the racetrack. You can argue either way whether any board of stewards should have the authority to mediate such matters, but that’s not the point. The real issue is that if you keep stretching the scope of what stewards are supposed to be concentrating on beyond what happens on the racetrack, their ability to focus on and officiate the races is bound to be compromised.

A possible solution might be for racing commissions and tracks to create the position of an “administrative steward” whose sole function is to hear and rule upon any off-track violations not directly related to the running and outcome of races.

You can also make the case for looking beyond the traditional pool of applicants from within the sport when attempting to fill job openings on stewards’ boards. Given the number of rulings that end up getting swatted down in the court system (particularly those involving suspensions for drug offenses), it would seem well worth the extra up-front money in salary to employ a legal specialist who has the ability to craft stewards’ rulings that consistently stick when they are contested in courts of law.

Both of these ideas would involve moderate up-front costs in an industry that has traditionally been reluctant to pay for integrity-related intangibles. And adding new or specialized officials would also eat into the traditional power structures and little fiefdoms that have evolved in stewards’ stands everywhere over the past 150 years or so.

But if you think of the equation in terms of lessening the stewards’ overall workload in order to raise the bar of their racing-specific job expectations, the extra costs seem more like an investment than a gamble.

When the Whip Comes Down…

Beyond the above-mentioned riff on officiating in general, two post-Breeders’ Cup rulings were handed down against jockeys by the Del Mar stewards, but neither got much play in the racing press in the aftermath of the championships.

Flavien Prat got hit with a $300 fine for using the riding crop more than three times in succession without giving the horse a chance to respond for his winning ride aboard Battle of Midway (Smart Strike) in the GI Breeders’ Cup Dirt Mile. Javier Castellano absorbed a $1,000 punishment for the same infraction aboard West Coast (Flatter), who ran third in the GI Breeders’ Cup Classic.

The difference in severity of the two penalties was one of degree.

Prat, according to the stewards’ minutes, hit his 14-1 horse four times in the run to the finish wire en route to a half-length victory, and reportedly agreed with the stewards’ assessment of the situation when summoned to a video review.

Castellano’s vigorous stretch-drive stick work was deemed to have been “an appropriate penalty given the multiple violations in a $6-million race.” According to the minutes, Castellano’s explanation, relayed by jockey Mike Smith, who represented him at the review, was that “he got caught up in the moment and forgot about the crop rule.”

And while much was made over the very public pre-race determination that Charles Fipke, the owner of GI Breeders’ Cup Distaff winner Forever Unbridled (Unbridled’s Song), would have to pay double jockey fees as a penalty for a late rider switch from Joel Rosario to John Velazquez, the Del Mar stewards’ minutes from last week revealed that Castellano was involved in a similar dispute that was not resolved in his favor.

Mike Lakow, Castellano’s agent, had alleged that he had been given the call to ride Mongolian Saturday (Any Given Saturday) in the GI Breeders’ Cup Turf Sprint, but that the owner and trainer had not lived up to the call.

The stewards listened to all parties and examined text messages, but determined that no definite call had existed on either side, so no action was taken. Mongolian Saturday, who won the 2015 version of the Turf Sprint, ended up finishing 12th and last at 66-1 odds under Florent Geroux in this year’s running.