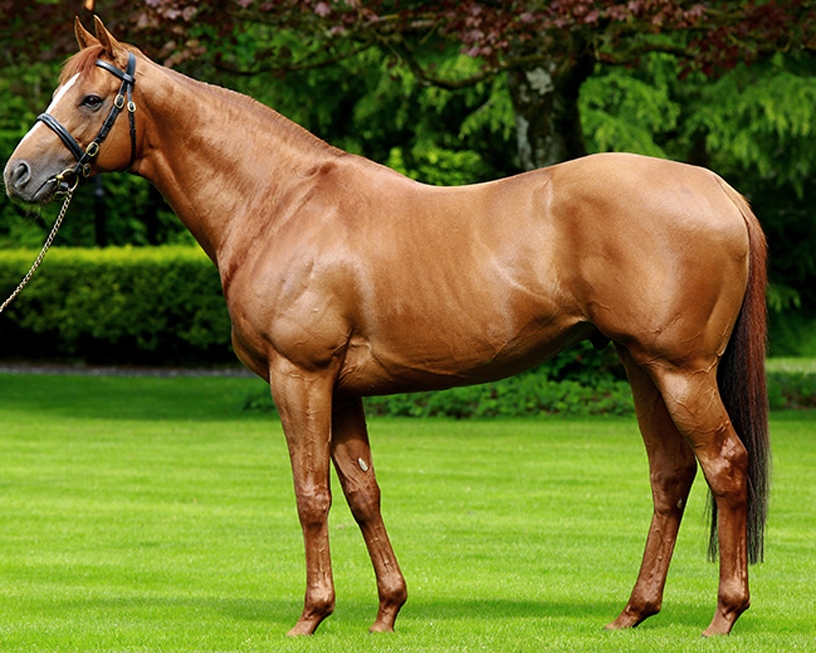 Ruler Of The World: sire of La Petite Coco | Coolmore

Bernd and Ute Schone may sound an unlikely couple to be putting County Offaly in lights. However, the husband-and-wife team, who hail from Germany but have based themselves in the village of Rhode for over a decade, boast the rare achievement of breeding a Group 1 winner after their graduate La Petite Coco (Ire) (Ruler Of The World {Ire}) stormed to Alwasmiyah Pretty Polly S. glory at the Curragh on Sunday.

Ute Schone, who runs the farm alongside her husband Bernd, described La Petite Coco's Group 1 victory as “a dream” and revealed that she still hadn't come back down to earth after Sunday's race.

Speaking on Monday, she said, “What can I say? Yesterday was so unreal. I am speechless. It is a dream, honestly. Watching her yesterday, that last furlong, I stood there in complete shock. I couldn't believe it.

“Even last year when she won her Group 2 on Irish Champions Weekend. I mean, hello? You are standing there watching it and you can't believe that it's a horse that you bred.”

Schone added, “We had La Petite Coco for two years and yesterday we were watching her winning a Group 1. Wow. It's indescribable, honestly.

“My husband [Bernd] and I, we are just small breeders, and something like this has never happened to us before.”

Bernd and Ute run a boarding facility in Rhode. They cater mostly for international clients and breed a handful of their own mares. La Petite Virginia (Ger) (Konigstiger {Ger}), the dam of La Petite Coco, was one of those mares.

“We refused a few offers [for La Petite Virginia] earlier on in La Petite Coco's career but, after she won the Blandford Stakes, we received an offer that was very hard to refuse,” – Ute Schone, breeder of La Petite Coco

That was until the Schones received an offer that they couldn't refuse for the mare after La Petite Coco won the G2 Blandford S. at the Curragh last term.

However, fortune had not always followed La Petite Virginia and, before La Petite Coco came onto the scene, the Schones endured their share of hard-luck stories.

Shone explained, “La Petite Virginia was very weak when she came to us first. Her dam had to be put down when she was only two months old and she was raised by a foster mare. We got her as a weanling and, because she was pretty weak, it was quite obvious not to put her into training.

“Because she was so well-bred, we decided to breed from her. We couldn't afford the big stallions but we went to what we thought would suit her, what was affordable and nice.”

She added, “Her first foal was a filly by Thewayyouare. She was sold abroad and won, which was great. We sent her to Power (GB) and we sold the foal to a man in Germany but unfortunately it died as a yearling. That was only the start of the bad luck with her.

“We had a beautiful Excelebration (Ire) colt foal. Just gorgeous. We turned him out in the field and everything was great. The vet liked him as well. He was perfect. The following morning came and the foal was dead.

“We skipped a year with her after that but then decided to try and do it again with her. We went to Ruler Of The World (Ire). We liked him as a racehorse. He's a Derby winner and is obviously by Galileo (Ire). We saw him in the flesh and we liked him a lot. The rest is history now.

After that we sent her to Ivawood (Ire) because we thought it would be a good idea to try and get a bit more speed into her so we still have that 2-year-old. She is in training with Andrew Kinirons.”

La Petite Virginia is a half-sister to Lavirco (Ger) and Laveron (GB), both known for being proven National Hunt stallions, and is from a good Gestut Fahrhof family.

Despite this, Schone did not think that La Petite Coco would make much at the sales and elected to race her. After two solid runs in Irish maidens for Andrew Kinirons, La Petite Coco was sold privately to Team Valor and sent to Paddy Twomey, for whom her career has blossomed with.

The one constant in the La Petite Coco story has been Billy Lee and Schone is under no doubt the role the rider has played.

She said, “We didn't send La Petite Coco to the auction because we didn't think she'd make any money. We decided to put her in training with Andrew Kinirons and he did a very good job with her.

“Andrew has a very good connection with Billy Lee. He rode her in two races and he always liked her, which meant a lot. I think we were very lucky having Billy on board so early in her career.”

Schone's Ivawood half-sister to La Petite Coco has yet to grace the track but the reports are good. As for La Petite Virginia, she was sold back to Gestut Fahrhof for an eye-watering sum and is understood to have given birth to a colt foal by Gleneagles.

Schone said, “Once you produce a good horse, the sales call is never far away. We refused a few offers earlier on in La Petite Coco's career but, after she won the Blandford Stakes, we received an offer that was very hard to refuse. Luckily enough, she went back to her breeder [Gestut Fahrhof].”

She added, “You could say it was a life-changing amount of money and you don't have to worry about certain things anymore. On the other hand, we owned La Petite Virginia for nearly 13 years. She became a part of the family. We went through so many things with her. Ups and downs. You build up a relationship with a horse like that.

“But she has gone back to one of the best stud farms in Germany and we know she will have a great life. There are no concerns there. We sold her in foal to Gleneagles (Ire) and she had a colt foal. The plan was to send her to Camelot (GB) after that.”