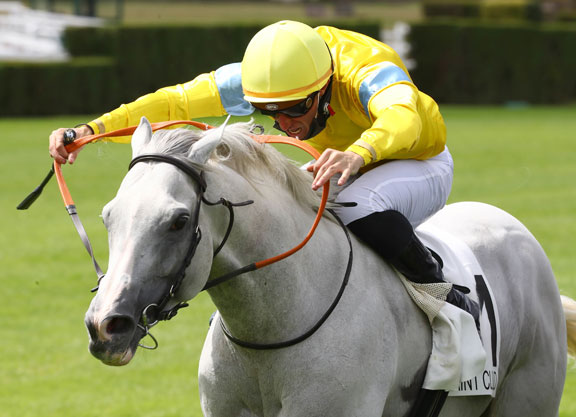 Good things come to those who wait and connections and fans of Way To Paris (GB) (Champs Elysees {GB}) gained a much-deserved moment in the sun as the 7-year-old was played late to take Sunday's G1 Grand Prix de Saint-Cloud. Restrained in last early by Pierre-Charles Boudot, the ever-zestful grey emerged in the nick of time to deny the battling duo Nagano Gold (GB) (Sixties Icon {GB}) and Ziyad (GB) (Rock of Gibraltar {Ire}) by a neck and a head. “You are always a little bit worried when running horses back-to-back with short intervals, but it looked in the mornings as if he had kept his form,” trainer Andrea Marcialis said of the 6-5 favourite, who was runner-up in the G1 Prix Ganay at Chantilly June 14. “It is my and his first group 1 and he is so brave–I owe him so much and it is a great moment. I thought we were in trouble, but he found more and has a big heart. He'll have a break now until the autumn.”

Way To Paris had come to prominence in 2018 when placed in the G2 Grand Prix de Chantilly and G3 Prix d'Hedouville before being tried over staying trips at the beginning of the following season. Runner-up in the G3 Prix de Barbeville and G2 Prix Vicomtesse Vigier at ParisLongchamp, he dropped to 14 furlongs to beat Marmelo (GB) (Duke of Marmalade {Ire}) in the G2 Prix Maurice de Nieuil also at that venue in July before finishing second to Waldgeist (GB) (Galileo {Ire}) in the G2 Prix Foy sent back there again in September. His last three starts prior to this saw him run second in the G2 Prix d'Harcourt also at ParisLongchamp May 11, gain a 4 1/2-length success in the latest edition of the Grand Prix de Chantilly staged at Deauville May 31 and run Sottsass (Fr) (Siyouni {Fr}) to a head when second in the Ganay.

With Old Persian (GB) (Dubawi {Ire}) failing to fire and beaten in early straight, Pierre Charles-Boudot's task was made easier and with the veteran giving him all the right signals it was just a case of when to ask him to extend. Ziyad refused to relent on the lead, as he had 12 months ago, but eventually had to give best to Nagano Gold only for them both to be swamped inside the last 100 metres by the popular grey. “I'm delighted–he deserved that and a mile and a half is much better for him than the Ganay distance,” the winning rider said. “He was more keen than usual during the race and it took a little while to get him to relax, so he maybe needs a break now.”

Way To Paris is the last living foal out of the G2 Premio Lydia Tesio winner Grey Way (Cozzene), whose previous best was the dual G1 Premio Presidente della Repubblica hero Distant Way (Distant View). Also responsible for the G3 Premio Ambrosiano winner Cima De Pluie (GB) (Singspiel {Ire}), she hails from the family of the triple grade I-winning Redattore (Brz) (Roi Normand). This is the dam line of Intriguing (Swaps), producer of the champion Numbered Account (Buckpasser) who is herself the dam of the GI Beldame S. heroine and multiple stakes-producing Dance Number (Northern Dancer) and the sire Private Account.