War Vets Pair with Thoroughbreds to Heal Both Humans and Horses 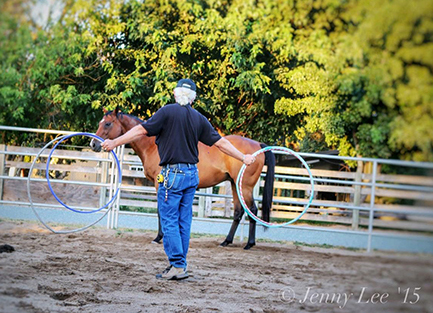 Five war veterans stand together inside a fenced-off enclosure on a small farm in drought-parched central California, warily eying the uncooperative ex-racehorse on the other side of the pen. In the center of the arena is a jump, and the military men and women have been tasked with somehow gaining control of the evasive Thoroughbred and getting him to leap over the obstacle.

The horse is not wearing any piece of equipment they can grab, and the vets are not allowed to use any tools, such as a rope or a shank, to lead the animal forward. When the horse won't come to them, one group member comes up with the idea of moving the jump closer to the horse, but that doesn't work either.

A sixth vet stands off to the side, separated by a row of barrels, watching as collective frustration mounts. Every three minutes, the person on the sidelines rotates into the group and someone else comes out, so each of them gets a turn at being both observer and participant.

The vets have various skill sets, and their combat experience spans the Vietnam, Iraq and Afghanistan wars. Some have familiarity with horses, others none. One thing they do have in common is that each has been diagnosed with post-traumatic stress disorder. That, and none of the vets has a clue as to what the elusive-and to some, imposing-animal is going to do next.

Neither does Julie Baker, and she's the founder of Stable Survivors, a six-week pilot program for PTSD patients that alternates with the more traditional group therapy sessions offered by Modesto Vet Center, the regional branch of the U.S. Department of Veterans Affairs.

Yet Baker, who related this scenario to TDN several days after in happened in early October, said it's perfectly fine that no one involved knows exactly what the horses will do.

While both Baker and the licensed psychotherapist helping to run the session have designed a therapy plan that covers many contingencies, the main point they are trying to impress upon the vets, she said, is that stress in an unfamiliar situation (like a horse arena) can be a powerful metaphor for dealing with uncertainty in other aspects of life.

“When people have an opportunity to go through an experiential learning process, you use those scenarios for metaphors in those people's lives,” Baker said. “It's a very flexible type of therapy where people get what they need out of it. And if they go somewhere that you're not expecting [as a therapist] you have to be able to go there with them.”

Although the concept of helping war vets by providing emotional wellness through equine interaction is not entirely new, programs like Stable Survivors have only recently started to expand nationally, primarily through help from placement organizations like the Thoroughbred Retirement Foundation

“Very early on, when we just had the [therapy] programs in the prisons, we had veterans who were incarcerated and working through their issues with the horses,” said Diana Pikulski, the TRF's director of external affairs. “And so we knew, right away, that there was a special connection there.”

The Department of Veterans Affairs breaks down PTSD estimates by service eras: Almost 31% of Vietnam vets, 20% of Iraqi war vets, 11% of vets of the war in Afghanistan, and 10% of Gulf War (Desert Storm) vet are believed to be afflicted with PTSD.

But Pikulski pointed out that emerging equine therapy programs for PTSD are only just now starting to evolve for two reasons: Three of the above-mentioned wars did not exist when the TRF began partnering with therapy programs. And it can sometimes take awhile before PTSD symptoms become evident in vets.

“The first notable situation that we came across was with a Vietnam vet back in the 1980s,” Pikulski said. “I think a lot of times, years and years can go by before people really feel the symptoms or feel that they have to deal with their symptoms.”

Baker's vision of equine-assisted psychotherapy for PTSD vets is part of a larger non-profit charitable organization she founded called Healing Arenas, Inc. Based in the city of Escalon, its mission statement is centered on fostering emotional healing through equine interaction while providing safe and restorative homes for retired racehorses.

On a 10-acre ranch managed by all-volunteer help, Healing Arenas is currently home to nine horses. Seven are Thoroughbreds, and five arrived via the TRF. Baker, who is the organization's president, said seven former racehorses have been adopted out this year, and those in the current rotation are being retrained for new disciplines designed to suit each equine retiree, including potential placement as sport horses, in mounted police units, or as trail-ridden pets.

“We are certified to do equine-assisted psychotherapy,” Baker said. “It's not riding of any kind. It's actually a therapeutic process that is done on the ground with tasks with the horses.”

Baker herself has taken a circuitous path to working with PTSD vets. She showed hunter/jumpers as a teen and later worked as an exercise rider at California tracks. She eventually managed racing stables as an assistant for trainers William Morey, Mark Couto and Chris Speckert. She stepped away from racing in 1993 to raise her family, but remained involved in the horse business by owning a small ranch and boarding horses.

Baker said the breakthrough that led her to found Healing Arenas came in 2006 when she responded to an advertisement in a trade magazine and took courses to become certified by the Equine Assisted Growth and Learning Association (EAGALA), an international association for professionals incorporating horses to address mental health and personal development needs.

“It just all made sense, right then and there,” Baker said. “And after I learned how to do this EAGALA method of psychotherapy, I was just blown away by the Thoroughbred.”

Baker continued: “You can take a Thoroughbred and go out and gather cows on 500 acres, and that Thoroughbred is going to go out there and do it because it wants to. They have the heart that another breed does not. I have a Quarter Horse that I go out and gather cows with, and he goes and does it because I tell him to, not because he wants to. And that is the difference between the Thoroughbred and the other breeds when it comes to therapy. They're out there interacting with people because they want to, not because they're told to.”

Pikulski agreed: “The feedback that we got is that the Thoroughbreds are particularly good at this because of their relationship with people and their sensitivity to how people are feeling and their surroundings.”

The current roster of ex-racehorses at Healing Arenas includes Viva Pentelicus (Pentelicus), a 19-year-old stakes-placed gelding who won 22 races and earned $347,494 while racing on every major circuit from coast to coast. “He's a horse that's kind of shy, and if he doesn't want to engage, he's not going to engage,” Baker said.

Another resident is 14-year old Get Out Happy (Bright Launch), who never made it past the maiden ranks in four tries in Ohio and West Virginia. Baker said when Healing Arenas got him, he had been turned out without regular exercise for the better part of a decade.

“We started him back in about March of this year, very slowly,” Baker said. “He's 16.3 hands and he got very body sore, so we had to keeping slowing down, then starting back. Now the mounted unit is looking at him for a police horse, and I think he's going to tolerate it. He'll be hopefully going to them in another month or two.”

But it is a recent arrival, Mr. Bad Deal, a 1-for-10 Oklahoma-bred with a big left knee and no right eye, who Baker thinks might have found his true calling as a therapy horse.

Baker said she spotted the 15-year-old gelding out in a field while scouting TRF horses in Kansas and knew right away she wanted him for her program.

“We thought maybe that connecting with a disabled animal would be a way to make things more comfortable for [therapy participants],” Baker explained. “He's just going to be a great therapy horse. The Stable Survivors are helping us desensitize him through therapy.”

At the first “icebreaker” session for Stable Survivors on Sept. 18, Mr. Bad Deal wore a purple ribbon that signaled to the vets that he was not to be engaged unless he approached them first.

“And it turns out he's always the first one to engage with people,” Baker said. “Things are going so well that by the end of the pilot program, the vets are going to be able to cut that ribbon off and deem him as a bona fide therapy horse.”

But that's fast-forwarding too far for the moment. Before the vets will get to that stage, they still had to deal with the emotions that arose when the uncooperative Thoroughbred wouldn't bend to the group's wishes and go over the jump. Near the end of that Oct. 2 session, Baker had the Stable Survivors take a break from the task to discuss it.

“It brought up some things for them that they needed to process on what it's like in life when you can't get something done, and you're watching other people try to do it, and it's not going the way that you want,” Baker said. “And this all aligns with PTSD symptomatic behavior. What do you do with your frustrations? How do you live with that?”

One participant labeled the horse “stubborn.” Several others likened that sort of behavior to a specific person in their lives.

Baker gave the vets another shot at the task, this time allowing them to select a “tool” from within the “community” (in this case, within the confines of the arena). One participant spied a halter and went to get it.

“We called it a 'tool,' because sometimes you need to use tools in your own community to get things done,” Baker emphasized, circling back to the therapeutic metaphor.

The horse allowed the halter to be fitted. Two of the vets jogged the Thoroughbred over the jump. Each of the others took then a turn leading the now-cooperative animal over the obstacle.

Baker said she concluded by asking the vets to come back for next session, which will take place Friday, by asking them to think of a tool that they might use to complete a frustrating task in their own lives.

“You have to build on the session that just happened,” Baker said. “There are so many variables to this therapy because it's so experiential in nature that you could go a million different ways with what people need. And it's not what we think they need, it's what they come up with and what they process that they need.”

Baker said it has taken her over a year to get Stable Survivors up and running, and its structure will evolve as Healing Arenas and the Modesto Vet Center gather information about the effectiveness of equine assisted psychotherapy in conjunction with traditional therapy.

All services must remain at no cost to the vets, and Baker said her organization welcomes donations and/or sponsorships of scholarships via www.healingarenas.org.

“It's taken a really long time to get here,” Baker said. “Now it's all coming together. The horses are benefiting, and these people are benefiting. And I get to say, 'Hey, I had a hand in this. This is great.'”