War of Will Targeting Belmont Stakes 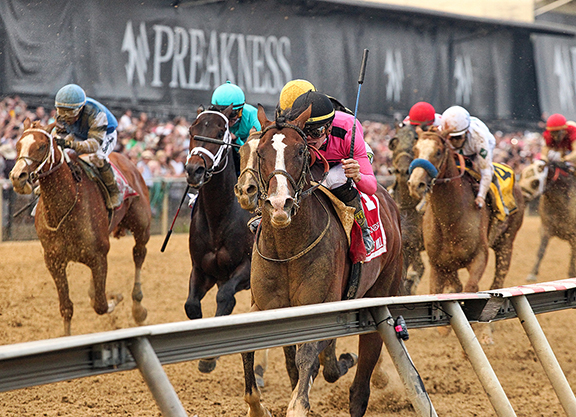 War of Will (War Front) exited his 1 1/4-length victory in Saturday's 144th GI Preakness S. in good order and will line up next in the GI Belmont S. June 8 if he continues to show all the right signs, trainer Mark Casse said Sunday morning.

“I would say there's an extremely good shot he'll be there,” Casse said of the Belmont S. “Now it's just a matter of him saying he doesn't want to go, that would be if he was lethargic or something in training.

“There are only three Triple Crown races; they're pretty important. I think if you can do it, you should do it. The Belmont is the Belmont. It's the third leg of the Triple Crown. Who doesn't want to win it?”

“Between texts and emails, I had more than 400, and I always answer everybody,” Casse said. “I've only answered about 250 so far, so I'm still working on that. And I got a very nice email from Gary West, which was very nice, congratulating [owner] Gary [Barber] and I.”

• Calumet Farm's Everfast (Take Charge Indy), a rallying second at 29-1 for trainer Dale Romans in the Preakness, will likely point to the Belmont S. “If everything goes well and he's training well, he'll be there,” Romans said of the GII Fasig-Tipton Holy Bull S. runner-up. “He can sneak up and run a big race. He always tries, and he showed in the Holy Bull that he can run with those kinds of horses.”

• Brad Cox, who finished third with Owendale (Into Mischief) and fourth with Warrior's Charge (Munnings) in the trainer's Triple Crown debut in the Preakness, said Owendale could possibly run in the Belmont S.

“They both cooled out fine, actually pretty quick too, considering to ask them to do something they'd never done before, going that far,” Cox said. “Warrior's Charge, as fast as he went early, he looked great his morning. His energy is good. Same thing with Owendale.

“Warrior's Charge, we wouldn't even consider the Belmont with him, obviously. The mile and a half is a touch far. Owendale, we'll think about it. We'll see how he's moving. It would have a lot to do with who's running, and, first of all, how he's doing. It's a lot back in three weeks. But it's a big purse and it's a prestigious race, and these horses only get one shot in their 3-year-old year.”