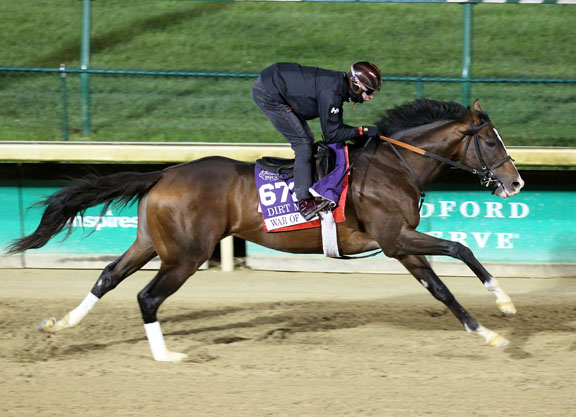 Classic winner and dual-surface multiple Grade I winner War of Will (War Front–Visions of Clarity {Ire}, by Sadler's Wells) has been officially retired and arrived at the Hancock family's Claiborne Farm near Paris, Ky., Monday morning to prepare for the 2021 breeding season. War of Will will stand for $25,000 live foal, stands and nurses.

Trained by Mark Casse for Gary Barber, War of Will burst onto the Triple Crown trail last year with consecutive wins in the GIII LeComte S. and the GII Risen Star S. before capturing the GI Preakness S. Switched to the lawn this year, he added the GI Maker's Mark Mile S. at Keeneland, a victory that put the versatile bay in rarified air with Grade I victories on both the dirt and turf. War of Will also placed in the GI Ricoh Woodbine Mile S. this year, the GI Pennsylvania Derby last year, and the GI Summer S. at two. Last seen off the board in Saturday's GI Breeders' Cup Dirt Mile, he retires with a record of 18-5-1-3 and earnings of $1,881,803.

War of Will, who is out of a half-sister to European champion, Breeders' Cup winner, and sire Spinning World (Nureyev), will be available for inspection by breeders Wednesday, Nov. 11.

This story was posted in Top News and tagged 2021 stud fees, Claiborne Farm, retired to stud, War of Will.