War Like Goddess Rolls to Fourth Straight in Flower Bowl 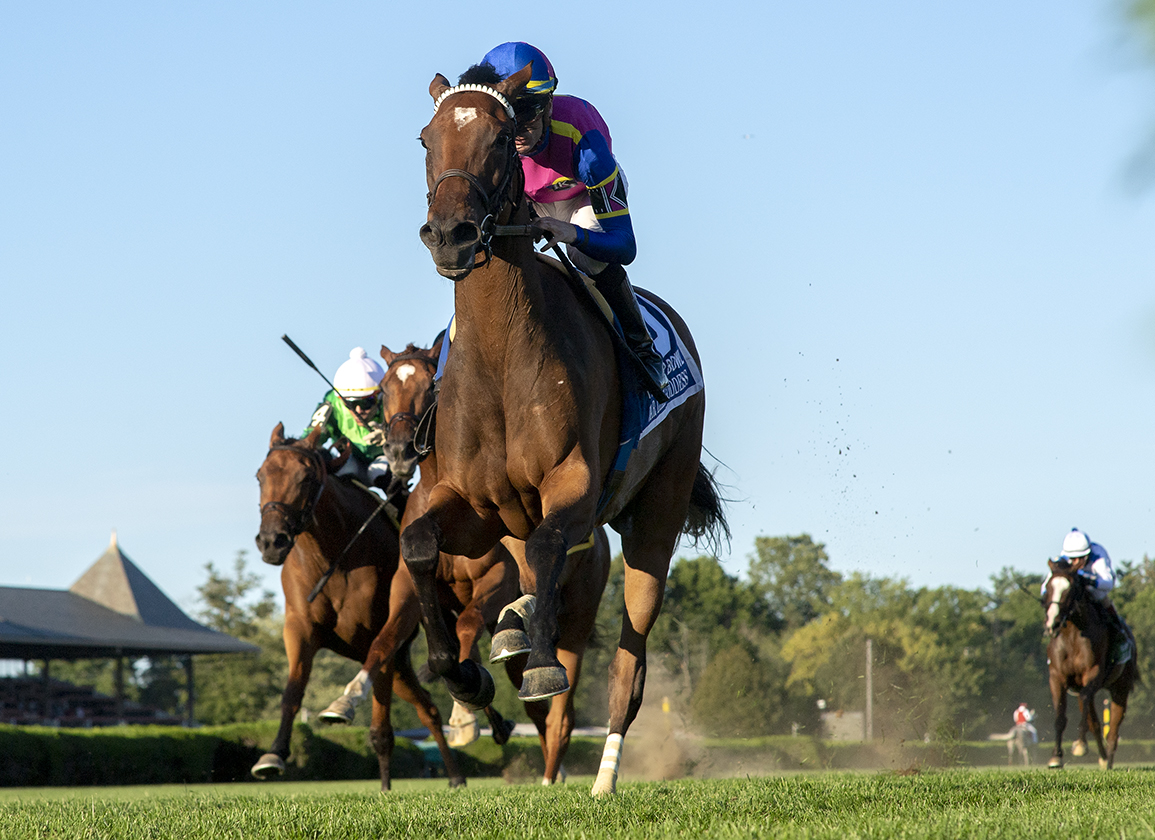 The meteoric ascent of George Krikorian's War Like Goddess (English Channel) continued in Saturday's GI Flower Bowl S., contested at Saratoga for the first time and lengthened to 11 furlongs. Coincidentally, the GI Breeders' Cup Filly & Mare Turf will be contested over that exact trip the first weekend of November and with the victory, the 4-year-old has earned an all-expenses-paid trip to Del Mar, where she figures to take plenty of beating.

Four of the bay filly's prior starts had come at a mile and three furlongs and farther, as she graduated by a convincing 3 1/4 lengths at Churchill last October before getting some time off. A better-than-it-might-look fifth from after trying to make a run from last in the GIII The Very One S. at Gulfstream first off a four-month layoff Feb. 27, War Like Goddess came with a furious stretch rally to make the grade by a nose in the GIII Orchid S. in Hallandale Mar. 27. She handled the extra furlong of Keeneland's GIII Bewitch S. Apr. 23 with consummate ease, scoring by 3 3/4 lengths, and made this track's GII Glens Falls S. her third straight graded conquest with a 3 1/4-length defeat of My Sister Nat (Fr) (Acclamation {GB}) Aug. 7.

La Signare (Fr) (Siyouni {Fr}) hit the ground running and set a reasonably strong pace for the distance as Great Island (Scat Daddy), extremely impressive in winning the GIII WinStar Matchmaker S. over nine panels at Monmouth July 17, was ridden much handier. War Like Goddess settled just behind midfield, with the white-capped My Sister Nat content to caboose the field. War Like Goddess, a bit headstrong through the lane for the first time settled much more kindly down the backstretch, but it was Joel Rosario who was first to play his hand, as he sent Great Island after her front-running stablemate, in an attempt to get first run on the heavy favorite. Great Island claimed La Signare in upper stretch, but Julien Leparoux had yet to move a muscle atop War Like Goddess, and the duo hit the front, felt one left-handed crack of the crop and pulled confidently clear. Great Island drifted a bit in upper stretch and was home a half-head better than My Sister Nat.

“She's a classy filly,” said Leparoux. “You can do whatever you want and she'll still give you that punch in the end. It's nice. It's a sign of the good ones, for sure. Bill Mott knows how to get them to these Grade 1s. They took their time with her and it has paid off. For sure, the Breeders' Cup is the goal, so if she gets there healthy, she'll be going in with a big chance.”

The 12th worldwide Group 1/Grade I winner for Calumet's under-appreciated English Channel, War Like Goddess is the ultimate rags-to-riches story. With no black-type to be found in her first couple of dams, War Like Goddess attracted a couple of $100 bids at Keeneland November in 2017, but two fewer bids at the September sale, when she was led out unsold for the upset price of $1,000. She had a few admirers at OBS June in 2019, selling for $30,000. War Like Goddess is one of two of her sire's 32 graded/group winners worldwide to be produced from a Danzig-line dam (Irish Strait).

The dam of the 3-year-old gelding Market Economy, by English Channel's son Optimizer, Misty North is responsible for the 2-year-old filly Thecradlewillrock (Red Rocks {Ire}). She was sold in foal to Calumet's Bal a Bali (Brz) for $1,000 at the 2019 November Sale and produced a colt last May now named North of Bali.

This story was posted in Top News and tagged Bill Mott, Breeders' Cup Win and You're In, English Channel, Flower Bowl, Saratoga, War Like Goddess.