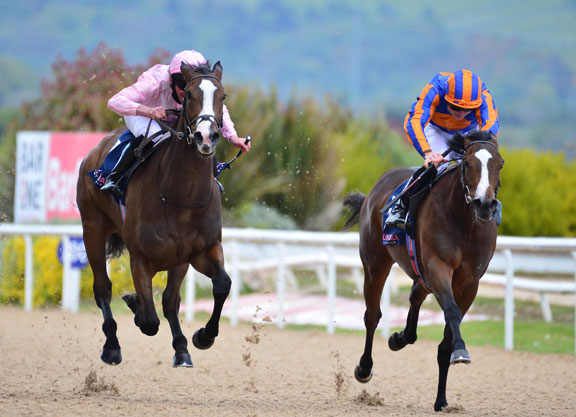 Some TDN Rising Stars get the tag for runaway victories and some for winning performances much slimmer but full of promise of what is to come and Ballydoyle's newcomer Yet (War Front) fit into the latter category on Wednesday. On paper, the sizeable first foal out of a strong-staying half-sister to Giant's Causeway had no right to be contesting a five-furlong carve-up on Dundalk's Polytrack but she was quick out of the gates for the Irish Stallion Farms EBF Fillies Maiden and up on the lead from the outset to dispute it with the 150-1 outsider Pretty Pioneer (Ire) (Prince of Lir {Ire}). Having seen off that peer at the top of the straight, the bay had the strongly-supported and strong-travelling Orinoco River (War Front) to deal with as they pulled clear of the remainder and despite being headed in the closing stages dug deep to get back in front near the line and prevail by a neck.

“She's a massive two-year-old. She had been working well and she's done it well,” commented Seamie Heffernan after switching from the stable's withdrawn Heart to Heart (GB) (Zoffany {Ire}), the half-sister to the G1 Commonwealth Cup hero Golden Horde (Ire) (Lethal Force {Ire}). “She has plenty of size to her, but she doesn't feel weak. I think I got headed, but her heart is in the right place.” To underline the strength of the form despite the select number of runners, there were a further 7 1/2 lengths back to Cailin Cliste (Ire) (Bated Breath {GB}) in third and that filly had finished 8 1/2 lengths behind Rosegreen's second 2-year-old TDN Rising Star of the year in Contarelli Chapel (Ire) (Caravaggio) in a red-hot Naas maiden last month.

The winner's dam Butterflies (Ire) (Galileo {Ire}) is one of Coolmore's more exciting broodmare prospects as the 13th progeny of the remarkable Mariah's Storm (Rahy) who was herself successful six times in graded-stakes company. Runner-up in the G3 Munster Oaks and third in the G3 Flame of Tara S., she makes up a list of significant performers headed by the “Iron Horse” and also featuring the G2 Cherry Hinton S. and G3 Swordlestown Stud Sprint S. scorer You'resothrilling (Storm Cat). The latter has entered the operation's own Hall of Fame by producing two Classic winners in Gleneagles (Ire) and Marvellous (Ire) as well as the high-class Happily (Ire) and Sunday's G3 Irish 1000 Guineas Trial winner Joan of Arc (Ire) all by Galileo.

Another of Mariah's Storm's daughters Pearling is a full-sister to Giant's Causeway who also proved what a potent influence Galileo is in this dynasty by throwing the G1 Irish Champion S. and G1 Tattersalls Gold Cup hero Decorated Knight (GB). Butterflies is also a full-sister to the unraced Fabulous (Ire), who has proven an instant success in her second career by producing the 3-year-old filly Thinking of You (American Pharoah) who was third behind Joan of Arc in the G3 Irish 1000 Guineas Trial. After Yet, there is a yearling colt by Quality Road and a 2021 filly by Justify.