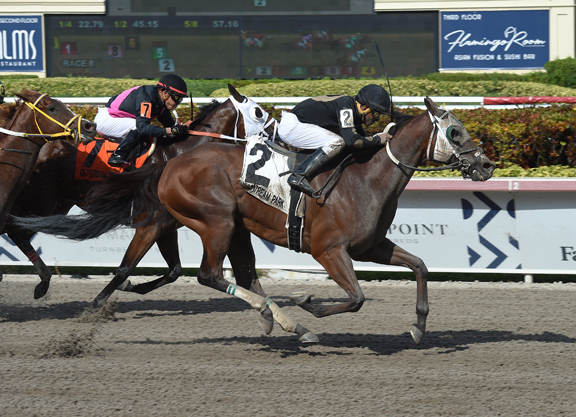 Trainer Peter Walder is grateful for the invitation to run a horse in the $823,000 Keeneland Korea Sprint, less than a year and a half after he entered a rehab center to combat a substance abuse issue.

Walder, annually one of the top trainers at Gulfstream Park, will saddle Fast Pass (Successful Appeal) in the 1,200-metre sprint Sept. 8 at Seoul Racecourse. Walder owns a quarter interest in the 6-year-old gelding, the other three-quarters owned by Peter Proscia, a 59-year-old oil executive who lives in New York and runs under the stable name Paradise Farms' Corp.

“It's nice to know I can have a horse again to compete at this level,” he said in reference to Force Freeze (Forest Camp), who ran second in the 2011 GI Breeders' Cup Sprint. “I probably wouldn't be here to be in this race if I didn't go into rehab.

“It's an every-day struggle, less so now than it was in the beginning. They preach [in rehab] take one minute at a time, one day at a time. This whole situation was really stressful coming over here with this horse, and in the past I would have [succumbed to substance abuse] trying to get the horse prepared to leave, but it's nice to know I can handle any stressful situation without any substance issues.”

Bought privately with another horse for $70,000 last fall, Fast Pass ran third first time out for Walder and Proscia in the $110,000 Claiming Crown Express last December at Gulfstream Park.

Fast Pass has been collecting checks regularly since. After winning the $75,000 Open Lead S. at Gulfstream in May, Walder received a notification from Seungho Ryu, general manager of the International Department for the Korean Racing Authority (KRA), asking if he would consider running in the Keeneland Korea Sprint. After Fast Pass finished third in the GIII Smile Sprint S. behind two horses that went on to finish in the money in Grade I races next time out, Walder travelled to New York to meet with Ryu. Walder then ran Fast Pass in a conditional allowance race as a prep for the Sprint and romped by six lengths.

“He's a dead closer and he's gotten really good since we've figured him out and let him be just that, and he's doing great,” Walder said. “He needs a lot of things to go well in front of him as far as pace.”

Because Japanese horses, which have done well in the last three editions of the Keeneland Korea Cup and Keeneland Korea Sprint, aren't competing in the races this year due to the trade dispute between Korea and Japan, it opened the door for more American horses.

“I am not just here representing the United States, I'm also representing Gulfstream Park. It's been my home for many years,” said Walder, who began his career at Woodbine before leaving for Florida in 1998. “I love [Gulfstream]. Everyone there throughout the years, and most recently Chief Operating Officer Tim Ritvo, has been great to me, and for that I will forever be loyal to them.”

Walder last raced in a $1 million race in 2015 with Sr. Quisqueyano (Exclusive Quality), who ran ninth in the GI Santa Anita H. after winning the Sunshine Millions Classic S.

A few months later, Walder's life and career began to fall apart. He had been at Lone Star Park with Sr. Quisqueyano for the GIII Texas Mile S. when his maternal grandfather, Sol Steinmetz, who had been like a father to him, passed away. Walder had been an occasional substance user before his grandfather's death, but that set him over the edge.

“That was the straw that broke the camel's back,” he said.

During that time, his stable went into a funk, winning at less than 10%, far below his 24% career win percentage. Proscia, who is a recovering alcoholic, said there were signs that Walder had a problem when his winning rate dropped and he wasn't showing up for work.

In 2016, Walder went on hiatus for nine months after withdrawing his trainer's application to take care of a legal issue in California that had been hanging over his head for 30 years.

Walder returned to racing but ultimately decided in March 2018 to seek help.

“As an addict we always blame everybody else for the way that we are. It's never our fault. Everything is everybody else's fault. We never look in the mirror.”

Proscia said he and most of Walder's clients rallied around him. “I was concerned about it,” Proscia said. “Obviously we became friends. I tried to do the right thing. Stay with him with the horses we had and help where I could. I was there occasionally going back and forth from New York. As a friend I was happy to see him come out of it, get his stuff together and now he seems to be doing really well.”

When Walder returned to racing, he went public with what happened to him in an interview with Daily Racing Form. By that point, word had already circulated about his stint in rehab, although he had managed to keep his substance abuse hidden from his owners prior to that.

“I realized the things that I had done and the damage I had done to people,” he said about his reason to talk about his problem. “To tell you the truth, you realize a lot of that when you are an addict, but rather than accepting it and trying to get forgiveness from people that you've hurt, you just turn around and hurt yourself. That's what addicts do, we hurt ourselves. Being in rehab you learn to forgive yourself and to ask for forgiveness from the people you've hurt, and if they forgive you, fine, and if they don't forgive you it's on them.”

Not only did he not lose clients, he actually gained some when the story of his rehab stint was published. And shortly after that, he won a stakes race and his stable was back winning at an impressive clip.

Last Thanksgiving he posted a Facebook entry to offer thanks to the many people who helped him battle through his problems.

“In life's struggles, it is easy to forget the people and things we are blessed to have in our lives and to only concentrate on the people and things we don't,” he wrote. “We beat ourselves up for the problems we made and the people we hurt and let down along the way. I appreciate everyone that has helped me in the past and are still continuously being by my side now. What I am most thankful for now is being clean one day at a time and living life moving forward with no regrets of the past that I can't change and to only live in the present and to be good to me and all the people around me.”

Life is good for Walder. He has 22 horses and has full or partial ownership in 15 of them. His stable is hitting at a 38% win clip at Gulfstream, although he knows if he starts going on a losing streak people will immediately begin to speculate his substance abuse problems have resurfaced.

“I know triggers, I know what can happen,” Proscia said, speaking of his own experiences as a recovering alcoholic. “When I go to therapy I like to speak about it and tell people if you've got a problem, don't be ashamed about it and deal with it.

“Everybody's got problems, whether in business, personal, addictions, whatever they may be. Get it out in the open and address it. Fix it, the best you can. You'd be surprised about the people that rally around you. Friends that you thought were your friends that don't [support you], screw them. I'm happy for [Walder]. The guy's in good shape now and doing his thing, I'm glad for him.”

Win or lose, Walder knows his biggest victory is what he did to address his issues and how he can use his experience to help others in a similar situation.

“We are taught [in rehab] that the best thing we could do when we get clean is to give back to others,” he said. “The way to give back is by talking about it and being open about our issues and show people that we are only human and that we can actually beat this deadly disease and all the adversities that come with it as long as we stay clean.”