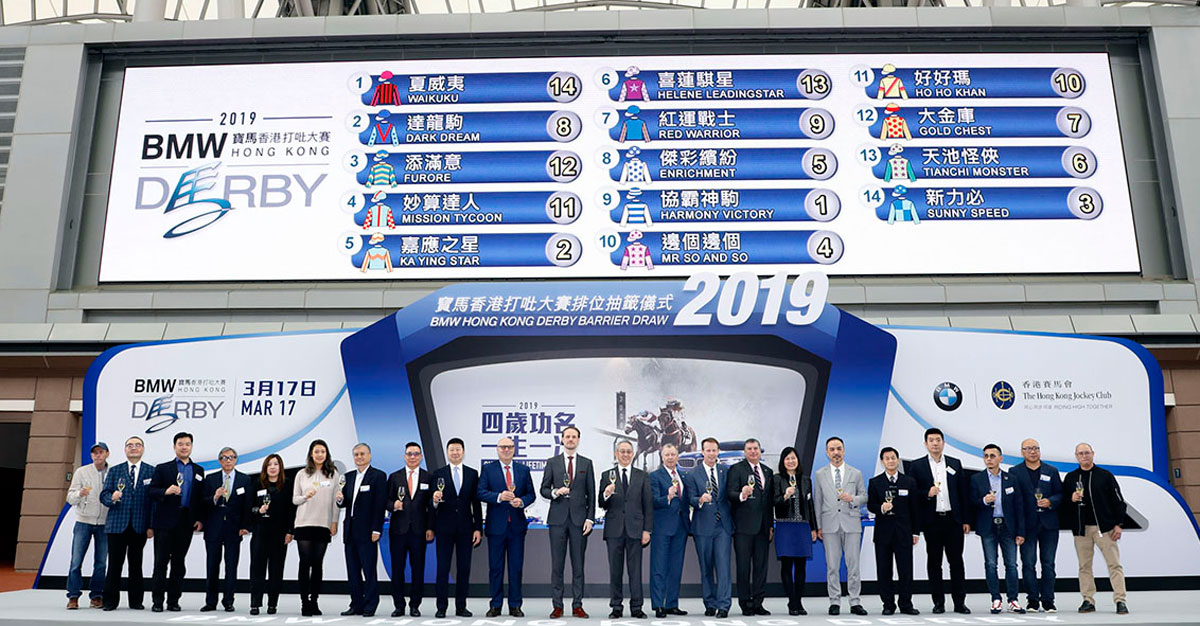 Already under a bit of an injury cloud, the task ahead of top-rated Waikuku (Ire) (Harbour Watch {Ire}) in Sunday's HK$18-million BMW Hong Kong Derby (2000m) became just a little trickier after the Irish import was assigned the widest stall in the field of 14 for the marquee race on the domestic calendar when post positions were drawn Thursday morning in the Sha Tin parade ring.

But if that outcome was causing perennial leading trainer John Size any angst whatsoever, the notoriously level-headed conditioner wasn't showing it and he's happy to play the hand he's been dealt.

“It depends on how it plays out,” Size, who won his third Derby just last year with Ping Hai Star (NZ) (Nom Du Jeu {NZ}), told the HKJC's David Morgan. “It could be worse, it could be better, it just depends on the set-up of the race and how they run the race. I'll look at it closely, but he's proven to be quite versatile. He began from the outside last start, very fast, and then went back in the field, so he's not a difficult horse to manoeuvre. We'll just have to work around that.”

Joao Moreira, who guided the late Rapper Dragon (Aus) (Street Boss) to victory in 2017, added: “It's not the ideal gate but looking at the draw overall, it seems like the way the race might unfold will make it very interesting. I don't have a particular set-up in mind yet of how we'll do things. It could be an unusual Derby based on where the horses are in the draw.”

Waikuku was reportedly sore in a foot earlier this week and was given an easy time of it for a few days, but Size felt comfortable galloping his charge Thursday. Waikuku closed off 800m of work in :25.7 and was given a clean bill of health.

“It was just a normal workout for him,” Size said. “There was nothing special or different about it, it was just the normal work that he would usually do.”

Size's former protege Frankie Lor sends out the three other 100-plus rated gallopers in the field, including Hong Kong Classic Mile hero Furore (NZ) (Pierro {Aus}) and Mission Tycoon (Aus) (Written Tycoon {Aus}), the Classic Mile second who caused a massive boilover in the Hong Kong Classic Mile last time. The duo drew gates 12 and 11, respectively, while the well-regarded Dark Dream (Aus) (All American {Aus}) is a few stalls down the line in eight.

“The horses' form is good and you always need luck in the race. I can only produce the horse in top form for the race and then we need luck and we'll see,” Lor said. “I'll talk to Hugh Bowman about Furore; Dark Dream maybe can travel midfield from that draw.”

Mission Tycoon will be prominent in the run, as will the Tony Cruz-trained Ka Ying Star (GB) (Cityscape {GB}) who will likely make the running from his inside barrier in two.

“The horse is in top form and I reckon I've got the best draw for him, he's got the inside and I'm very happy with that,” said Cruz, three times a Derby winner as a jockey and a two-time Derby-winning trainer.

A pair of horses with longshot appeal have also drawn low. Harmony Victory (Brz) (Public Purse), unplaced, but with some excuses in the first two legs of the 4-year-old series, gets the shortest way around from gate one, while Sunny Speed (GB) (Havana Gold {Ire}), a much-improved fourth to Waikuku last time over 1800m, leaves from the four-hole.

The Derby is carded as race eight on a 10-race program, with post time set for 4.35 local time. Click for the HKJC form.