‘Voice of Meadowlands’ McKee Passes Away 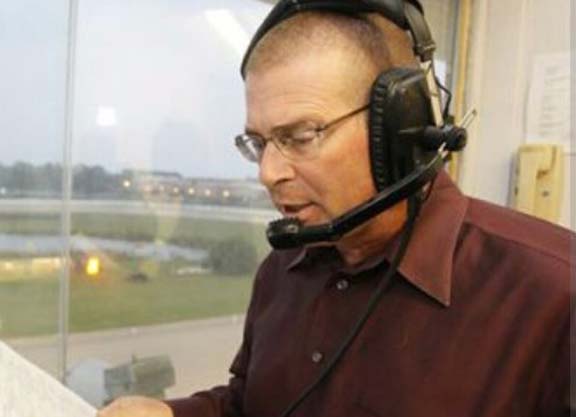 Sam McKee, best known as a signature voice of the Meadowlands for the past two decades, died Mar. 7 while attempting a gallant rehabilitation from a major stroke he suffered Feb. 2. The Blairstown, N.J., resident would have turned 55 later this month.

McKee, a 2012 communications inductee in the Harness Racing Museum & Hall of Fame, was well respected among announcing peers and fans alike because of his strong sense of professionalism and unbounded enjoyment of all things related to horse racing. He coupled a deep knowledge of the intricacies of race broadcasting with an easygoing, affable manner that sometimes made his hard work and meticulous preparation seem effortless, and McKee’s willingness to be an enthusiastic mentor to newcomers breaking into the racing industry will return dividends to the sport long after his passing.

McKee’s friends and admirers took to social media on Wednesday to recall him fondly, but with shock at his having died at a relatively young age.

“Gone is one of our greatest talents & an even better man. Not a piece of the industry Sam McKee did not touch,” the United States Trotting Association posted on Twitter.

“Saddened by the news of the passing of our friend Sam McKee. He was a great ambassador, announcer, but most importantly, he was a great man,” read a Twitter post from The Little Brown Jug.

Although McKee was most closely associated with Standardbred racing, he was a versatile enough broadcaster to handle the crossover to Thoroughbred announcing, too. Early on in his career, he called Thoroughbreds at the now-defunct Detroit Race Course, and he was part of the Thoroughbred fill-in rotation at the Meadowlands and Monmouth Park. In 2007, when Monmouth hosted the Breeders’ Cup World Championships, McKee was invited to participate in the “all-star announcers” promotion that featured racecallers from around the globe.

Larry Collmus, the current New York Racing Association and NBC television Triple Crown and Breeders’ Cup announcer, recalled a day in 2014 when McKee invited him up to the Meadowlands booth to do a promotional harness race call. Part of the fun, Collmus said, was watching how McKee prepared for his nightly assignments.

“I watched him call a race, and [fellow announcer] Travis Stone was up in the booth with me,” Collmus said via phone. “And Sam was chatting with us right up until it’s time do the race. The race starts, and his program is on the desk behind him. Literally, he worked with nothing in front of him, and he was absolutely flawless–descriptive, dead-on, every horse right, no hesitation. It was just him and binoculars. And he wasn’t showing off–that was how he did it. I point to the program, and Travis and I are just shaking our heads, thinking, ‘Oh my God, this guy’s a legend.’ He was as good as it gets in harness racing, and he could call a Thoroughbred race, too. He was just one of those guys who was very talented, and not an egotistical bone in his body.”

In the first race at Gulfstream Park on Wednesday, another Thoroughbred announcer, Pete Aiello, honored McKee by saying, “Sam, this one’s for you,” as the field entered the final furlong before incorporating a McKee-esque “slugging it out…charging hard and edging away!” into his call.

McKee also adeptly juggled executive duties with his on-mic assignments, working as the broadcast director for the Meadowlands.

According to a biography posted on Harnessracing.com, McKee grew up on his family’s 32-acre Standardbred farm in Linden, Mich., which had its own half-mile training track. As young as age four, he developed a fascination with horse race broadcasts and began entertaining his family with imaginary race calls.

“Being from Michigan, our family started going to the Little Brown Jug in 1968 when I was six years old,” McKee once told Harnesslink.com. “I loved the excitement, the drama, and the tempo of [Roger Huston’s] race calls. I wrote him a fan letter when I was 10 and went out to The Meadows when I was 14 where he let me call qualifying races. He opened a lot of doors for me when I was young and I doubt if I would be where I am today without his help early on. I got to call a race at Delaware, Ohio, at 14 and announced some races at The Meadows that year as well.”

As a teen, McKee began training and jogging horses at his family’s facility, and at 18 he won several races driving on the Michigan fairs circuit. All the while he kept calling practice races into a tape recorder to hone his announcing skills, and the day after he graduated from high school, he was hired as the track announcer at Saginaw Valley Downs. Gigs at Sports Creek Raceway, Raceway Park, and Detroit followed, and after picking up simulcast directing and other general track management know-how, McKee worked as director of operations at Northville Downs.

McKee earned a big break in 1998 when he was hired to call races at the Meadowlands, first on a fill-in basis before impressing his bosses enough that he got signed on full time to be one of the voices of the nation’s premiere harness venue (he split duties with Ken Warkentin). As he became more prominent, other high-profile jobs came his way, like being broadcast coordinator for The Little Brown Jug and calling races at Kentucky’s historic Red Mile.

McKee was elected to the Michigan Harness Horsemen’s Association’s Hall of Fame in 2009. Three years later, the national Hall of Fame honor followed.

In the aftermath of McKee’s stroke and subsequent surgery, a GoFundMe page was established to help pay for his medical and rehabilitation expenses. In one month, 630 people donated $154,220, well beyond the fund’s stated goal of $100,000.

Funeral arrangements are pending. According to Harnessracing.com, McKee is survived by his wife, Chris; daughters Meagan, Melissa and Lindsey; a sister, Sally; and his father and stepmother.