Viva España As Kitty Marion Has The Whip Hand 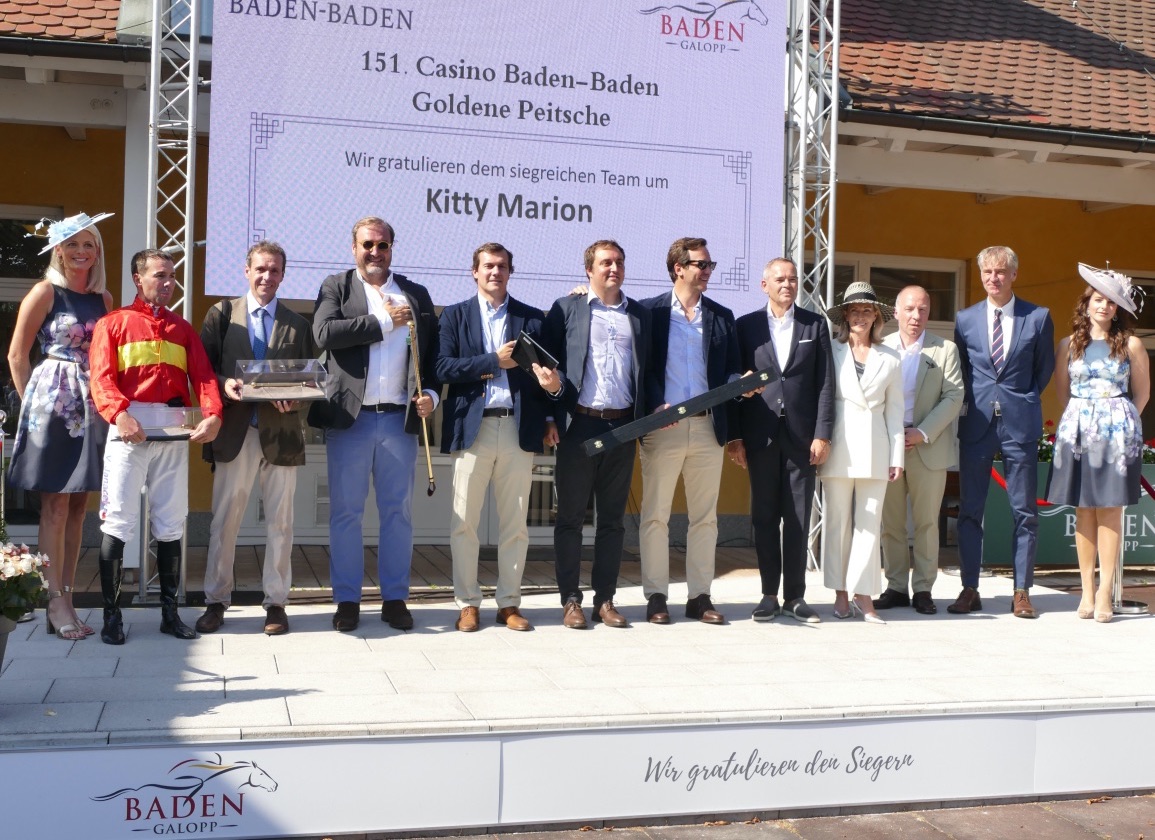 BADEN-BADEN, Germany–It is not often you hear the Spanish national anthem ringing out across Germany but there was an emotional rendition of the 'Marcha Real' on Saturday as Kitty Marion (GB) (Iffraaj {GB}) became the first Spanish-trained group winner at Baden-Baden racecourse in the G3 Goldene Peitsche.

Guillermo Arizkorreta is well known in his native country as the multiple champion trainer with the largest string based at La Zarzuela racecourse in Madrid. He has also made a number of international forays in the past, to France and Dubai, but this was the first time he had brought any runners to Baden-Baden. Along with Kitty Marion, he saddled Hold On Now (GB) (Farhh {GB}) to finish fifth in the listed Wackenhut Mercedes Benz Fillies Cup earlier on the card. On Sunday, he will be represented by Rodaballo (GB) (Lope De Vega {Ire}) in the G2 Kronimus Oettingen Rennen.

“This is an experiment, our first time here,” said the trainer. It is unlikely to be the last.

Previously trained in France by Henri-Alex Pantall, Kitty Marion was let go by Godolphin last July for 3,000gns at Tattersalls, where Edgar Byrne selected her for his friend Arizkorreta and a group of 10 owners made up of friends and family of Angel Saenz. A group of 20 supporters made the trip from Madrid to the outskirts of the Black Forest to cheer the mare home.

And they have had much to cheer about in the 14 months that they have owned the 5-year-old. Kitty Marion won over 1600 metres on debut as a 4-year-old for Godolphin at the rural French track of Lignieres en Berry. Two disappointing starts followed before she was sent to the sales. Since moving to Spain she has won three of her six starts in the country as well as finishing runner-up in the listed Premio Certosa at San Siro back in April.

Bred by Julia Scott, formerly of Glebe Stud, along with her brother James Dean and Lady Fiona Trenchard, Kitty Marion has only enhanced what was already a very promising pedigree as her dam, the six-furlong winner Pretty Primo (GB) (Kyllachy {GB}), is a half-sister to Group 1 winner and sought-after sire Wootton Bassett (GB), who shares his sire with Kitty Marion.

“We bought her at Tattersalls and since we dropped her in trip she has improved a lot,” said Arizkorreta after welcoming his new stable star back to Baden-Baden's winner's enclosure. “Sometimes she doesn't jump very well from the stalls but today she was very quick, and she was very brave to hold on. She had run very well in a listed race in Milan but this is our first Group 3 win.”

As the translation of the race name suggests, the race trophy is a gold whip inscribed with the previous 150 winners of the historic contest. The list includes the former Spanish-trained Silverside (Pleasantly Perfect), who won the Goldene Peitsche 10 years ago when it was still a Group 2 contest, but he was based in France at the time of his victory.

It will be worth keeping an eye Rodaballo, last year's Spanish 2000 Guineas winner, in his Group 2 contest on Sunday.

The highly consistent colt, bred by Spencer Chapman's Aston House Stud, has won four of his seven starts in Madrid and finished runner-up in the other three, as well as being listed-placed in France last September. He too was bought at Tattersalls, but this time from the Ardglas Stables draft at the 2019 Guineas Breeze-up Sale.

Arizkorreta said on Saturday, “It is a tough race but we were actually more confident about his chances than for Kitty Marion.”