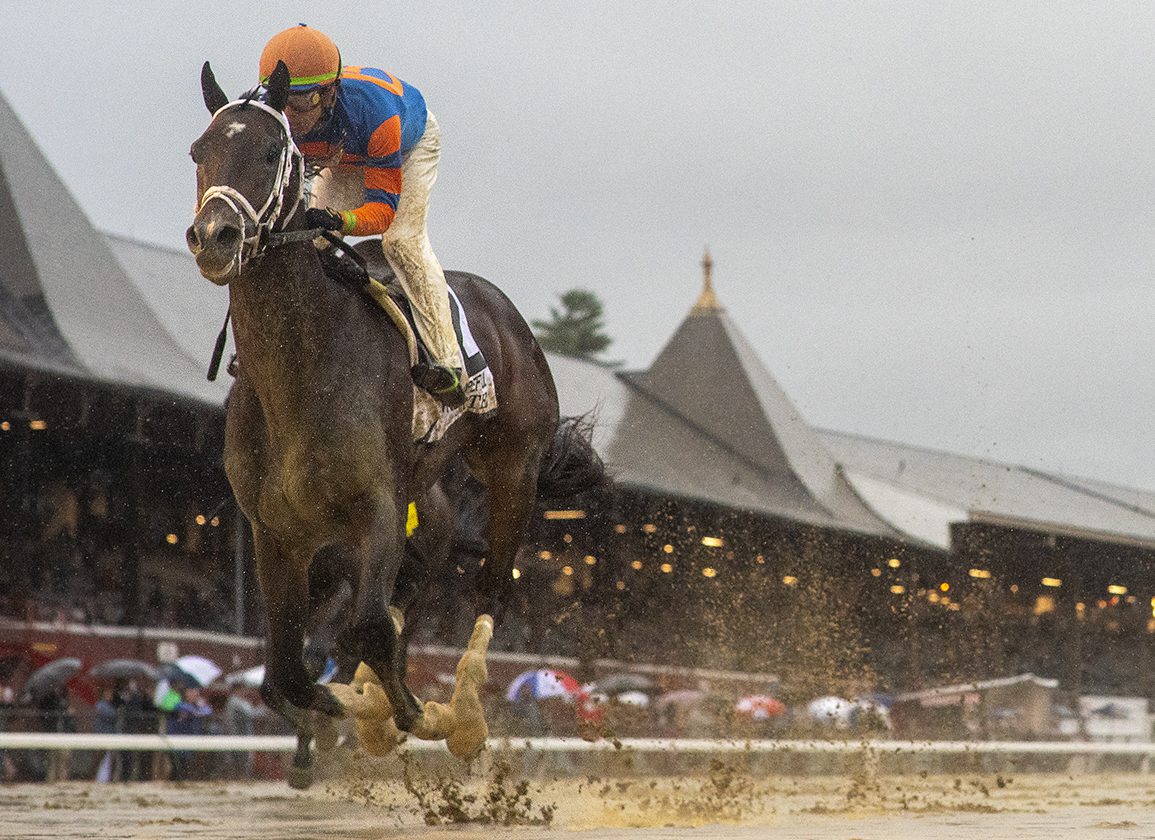 Repole Stable and St Elias Stable's Forte (Violence), the beaten favorite in the GIII Sanford S. on opening weekend, rebounded with an emphatic victory through the rain drops in the GI Hopeful S. on closing day at Saratoga Monday. Sent off at 6-1, the dark bay colt was squeezed back at the break and rated near the back of the field as favored Gulfport (Uncle Mo), looking to rebound from his own defeat as a Spa favorite in the Aug. 13 GII Saratoga Special, jumped out to the early lead over the sloppy track and took the field through fractions of :22.74 and :45.57. Forte was making rapid progress turning for home and, as Gulfport floated wide into the stretch, he strode powerfully to the lead along the inside and splashed home a three-length winner. Gulfport was a clear second as Blazing Sevens (Good Magic) completed the 'TDN Rising Star' trifecta.

“They ran away from me a little bit and my horse doesn't have that kind of speed,” winning jockey Irad Ortiz, Jr. said of his trip aboard the winner. “I didn't panic, I knew we'd be in the back. I kept him in the race and in the turn I started working on him. He started to pick it up slowly, but he picked it up. At the top of the stretch, I hit him a couple times and he responded really well. I knew I had a chance to win, so I just kept him busy.”

Winning trainer Todd Pletcher said, “He came really energetic into the paddock, but it was a good energy, though. You could tell he was kind of enjoying the rain and playing in the slop and splashing in the puddles in the paddock. I love the way he kicked away from the pony, he warmed up awesome.

Forte was one of 45 yearlings purchased  by the partnership of Mike Repole's Repole Stable and Vinnie Viola's St. Elias Stables in a $16.2-million spending spree at last year's Keeneland September sale. The partnership, with bloodstock agent Jacob West signing the tickets, was the leading buyer at the auction.

“This is what we're about,” Repole said from the winner's circle Monday. “Vinnie, Todd and I made a big investment last year. The team from Jim Martin, Ed Rosen, Danielle Bricker, and Jacob West. This is what we do. It's been fun, Irad has been winning some big races for us, Todd and I have been friends for a long, long time. It's been a lot of fun.”

Forte, a much-hyped 1-5 favorite, was tabbed a 'TDN Rising Star' following his 7 3/4-length victory in his five-furlong debut at Belmont Park May 27. Favored again in the July 16 GIII Sanford S., the dark bay colt was never in the mix and finished a lackluster fourth.

“Last time, he wasn't able to get extracted into the clear until really, really late,” Pletcher explained. “When he did, he showed some interest. He came back and trained really well with some older horses. His last breeze was with Bal Harbour who won earlier on the card. There were a lot of good indications that he was going to rebound and run to his capabilities, but you never know until you see it. I felt like the added distance was in his favor and he's a nice colt.”

Looking ahead to a potential next start for Forte, Pletcher said, “Our first reaction was to go to the [Oct. 1 GI] Champagne, but we'll talk to Vinnie and Mike and come up with a game plan. The Champagne is a race we've always thought highly of and that would be first on the radar.”

Forte is the sixth Grade I winner for Violence, whose son Volatile also enjoyed top-level success at the Spa in the 2020 GI Alfred G. Vanderbilt H.

Queen Caroline was purchased by Amy Moore of South Gate Farm for $170,000 at the 2014 Keeneland September sale. The mare went on to win four stakes in Moore's colors before becoming one of the Virginia farm's first broodmares. Forte is the mare's first foal. She has a yearling colt by Uncle Mo who is scheduled to sell as hip 11 in next Monday's first session of the Keeneland September sale. The mare is currently in foal to Not This Time.

Click for the Equibase.com chart or the TJCIS.com PPs. VIDEO, sponsored by TVG.