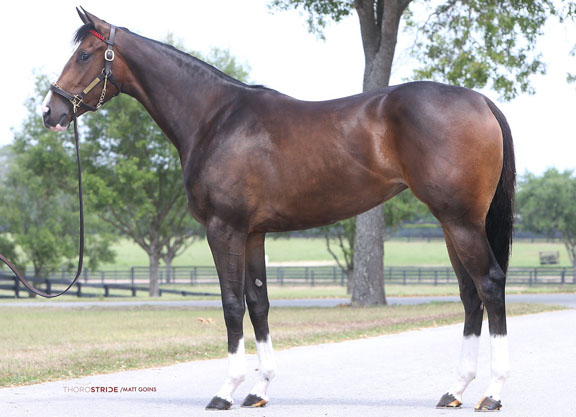 The under-tack show for next week's Ocala Breeders' Sales Company's Spring Sale of 2-Year-Olds in Training, delayed a day by Sunday's stormy weather, got underway Monday in Central Florida with 13 juveniles sharing the bullet furlong time of :10 flat and a filly by Violence turning in the day's fastest quarter-mile breeze.

Eddie Woods consigns hip 107, a daughter of Violence out of the unraced Royal Paradise (Unbridled's Song). The bay filly claimed the session's quarter-mile bullet time of :20 3/5.

“I was expecting a good work for her,” Woods said Monday afternoon. “You can't tell someone a horse is going to go in :20 3/5, it's ridiculous. But whatever the fastest work was going to be of the day, she was going to be really right on it.”

“She's tall, leggy and she's got some length to her,” Woods said. “She's out of an Unbridled's Song mare and you can kind of see that in her. And she's bigger than I'd ever thought she'd be. She was a medium-sized yearling, but she's a big, beautiful filly now.”

Woods sent out six juveniles to work at OBS Monday.

“We had a good day, it all went pretty well,” he said of his results. “There were no surprises. Everyone looked to come back well, so we are happy about everything.”

Of the track following a day of intense rain storms Sunday, Woods said, “I think the track was very fair. There were a couple of :20 4/5s and :10 flats. There weren't any :9 and changes and that's kind of the way the track should be. We had so much rain yesterday and that track acts a little bit like a sponge at times with a lot of water where it absorbs some of the stuff and expands a little bit. We're talking minute amounts, but minute amounts effect times. So it will be interesting to see how it is as we go forward in the week. Hopefully it stays the same.”

Leading off the trio was hip 4, a daughter of Laoban out of Paper Kite (Bernardini). The bay filly, bred by Sequel, turned in her :10 flat work early in the day's first session.

“When you see me have a horse that goes first, that's usually a horse that I think a lot of in terms of speed,” Thomas said, adding of the filly, “She's a pretty mover out of a Bernardini mare. She is very nice. We're happy with her.”

Another Sequel homebred, a son of the operation's stallion Mission Impazible (hip 135), also turned in a :10 flat work. The gray colt is out of Scott's Aly Cat (Tale of the Cat).

“I bought [Scott's Aly Cat] from Roy Lerman from his Lambholm program,” Thomas explained. “We bought her in foal to Mission because I had seen her year-before baby and liked it. He has a little bit of a Tale of the Cat look and yet has a little more leg to him because of the Unbridled's Song from Mission. I gave that mare away on a co-breed deal to one of our breeders who is probably very happy today.”

Also working in :10 flat from the Sequel consignment was hip 187, a first-crop son of Grade I winner Cupid out of Silver Sands (El Prado {Ire}). Thomas purchased the colt for $57,000 at last year's Fasig-Tipton October sale.

“He's a May 25 foal and he's got a lot of length and a lot of stride,” Thomas said. “He belonged to a friend of mine who bred him in New York, so you always feel good when you can give back to our whole community. That horse was a Hidden Lake horse and they like to support our stallions, so I try hard on those breeders who support our stallions.”

Rounding out Sequel's team of New York-breds working Monday was a colt by Central Banker (hip 115), who worked in :10 1/5. Thomas is consigning the colt on behalf of breeders Chester and Mary Broman.

“Mr. Broman is another one who supports the New York program,” Thomas said. “So it's always fun when you have home-team horses.”

Despite the heavy rains Sunday, Thomas called an audible and sent her horses out to train following the cancellation of the breeze show.

“Normally we don't train the day before the breeze, but because they had already had one day off, I didn't want to not train,” Thomas said. “So we trained yesterday heading in.”

She added of the weather, “It was terrible. I realized we were about to get a deluge right in the middle of it.”

Also represented by a pair of bullets Monday was Grassroots Training and Sales, which sent out a filly by Dialed In (hip 113, :10 flat); and a filly by Violence (hip 190, :10 flat).

The under-tack show continues through Saturday with sessions beginning each day at 8 a.m. The OBS Spring sale will be held next Tuesday through Friday. Bidding begins each day at 10:30 a.m.