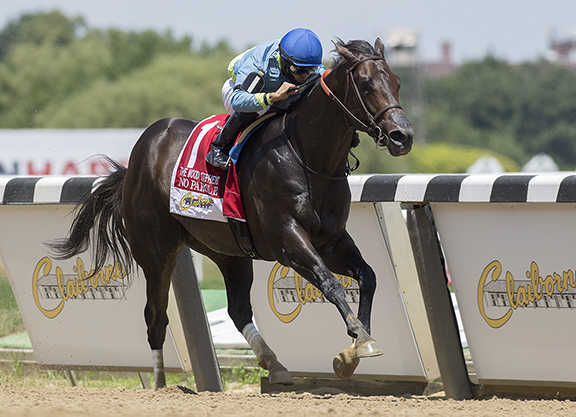 ELMONT, NY — 'TDN Rising Star' No Parole (Violence) exited his rail draw with his mind on business, and ran four quality rivals off their feet to collect a first top-level score in Saturday's GI Woody Stephens S. at Belmont Park.

The Louisiana-bred cruised on the front end through an opening quarter in :22.31 with slightly favored 'Rising Star' Meru (Sky Mesa) and GIII Gotham S. winner Mischevious Alex (Into Mischief) giving chase in second and third.

Mischevious Alex made his move into second and the turning- back 'TDN Rising Star' Shoplifted (Into Mischief) began to wind up with a flashy move from the back with a three-wide bid as they hit the quarter pole.

But No Parole was still going easy up front, however, and despite racing on his left lead down the stretch, reported home a dominating winner by 3 3/4 lengths.

Fellow 'Rising Star' and Bachelor S. runner-up Echo Town (Speightstown), racing a bit further back than expected in the early going perhaps, came along late after saving ground throughout to complete the exacta without threatening the winner.

No Parole won his first three career starts, all against state-breds, by a combined margin of 34 lengths, including the La-Bred Premier Night Prince S. going a two-turn mile at Delta Downs Feb. 8.

Little went right in his next attempt around two turns, however, facing open company for the first time in Oaklawn's GII Rebel S. Mar. 14. No Parole flashed early speed that day and tired badly to report home a distant last of eight in the sloppy going. He bounced back in style with a sharp optional claiming tally going six furlongs at Oaklawn last time Apr. 24.

“I think No Parole's game is his speed,” winning trainer Tom Amoss said. “He's shown that in all his races. To be able to draw the inside and take advantage of that with a good rider like [Luis] Saez, everything played out as we hoped.

Amoss continued, “No Parole is a one-turn horse for sure. We'll get together with the ownership and we'll sit down and map out a plan. We're very excited about his future and we're already thinking about the first weekend in November [for the Breeders' Cup].”

No Parole becomes the first North American Grade I winner for promising young sire Violence, and his seventh overall at the graded level. The winner's dam Plus One was a stakes-winning turf sprinter at Penn National and hails from the extended female family of graded winners License Fee (Black Tie Affair {Ire}) and Greeley's Galaxy (Mr. Greeley). Plus One brought $67,000 from Keith and Ginger Myers's Coteau Grove Farms in foal to Violence at the 2014 KEENOV sale. Her most recent produce is a yearling filly by Connect. She was not bred for 2020.