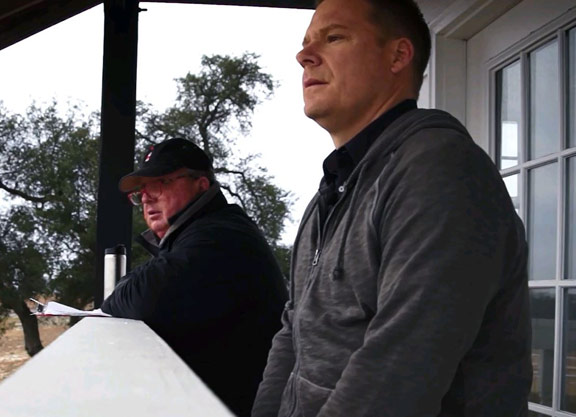 A few weeks ago, in the midst of Florida's contentious debate over the perils of pari-mutuel decoupling, a second-generation Ocala horseman was following his home state's legislative proceedings from afar in Lexington, Kentucky, where he now lives and works as a marketing executive.

Perusing the news, the marketing man grew incensed when he heard a remark uttered by someone within the highly politicized process that essentially said if hands-on horse workers lose their jobs as a result of Florida's pari-mutuel licensees being allowed to end live racing, that's okay, because they could just go get jobs somewhere else, or words to that effect.

This callous comment so infuriated the marketer that he abruptly cleared his calendar and called up a videographer friend, Jason Resinger. Together, they jumped in a car and drove 750 miles to Marion County, the heart of Florida's horse country, to shoot an impromptu documentary that he hoped would explain what the Thoroughbred industry really means to the state's 12,000 horse workers.

The marketing executive is Jon Siegel of PM Advertising. His finished product is a 14-minute video titled “Preserving Florida's Thoroughbred Industry” that he has posted online.

As of Mar 9, about a week since being uploaded, the video has already been viewed more than 2,200 times. Siegel hopes that number will grow as he makes the video freely available for industry supporters to use as ammunition to impress upon legislators how horse racing jobs in Florida aren't just a means to earn a living, but a special way of life.

“That comment got me to the point where I felt like, 'They don't understand. It's not just a job,'” Siegel said in a phone interview earlier this week. “I felt it was important to educate people as to the amount of work and the amount of passion that goes into this. It's a lifestyle more than it is a job.”

Siegel, 41, should know. He grew up in the Ocala area, where both his parents built extensive résumés in various Thoroughbred farm management positions dating to the 1970s. With that pedigree, it's not surprising that Siegel himself took a shine to learning how to nurture and care for stallions, broodmares, and young, just-developing racehorses.

“I can remember from an early age, just as soon as you could lift up a water bucket, you had a job helping around the farm. That kind of grew to mucking stalls and turning out horses, and eventually you're handling the babies by yourself,” Siegel said.

After he outgrew tagging along behind his parents at their workplaces, longtime Florida farm manager George Isaacs gave Siegel his first full-time horse job working in the training barn at Allen Paulson's Brookside South Farm. Isaacs is now the general manager at Bridlewood Farm, and he was one of the first people Siegel asked to agree to be interviewed for the project.

“We were kind of in and out and got everything done in three days,” Siegel explained. “We set everything up on the fly. We drove down on a Sunday, shot Monday, Tuesday, and early Wednesday, then started driving back Wednesday afternoon.”

While on his whirlwind tour, Siegel also documented what Florida's horse industry means to some of the people he knew growing up who are now establishing their own second- and third- generation horse businesses. But some of them aren't sure if the state will do enough to give them the opportunity to pass along that same way of life to their own children.

“These people do not work from nine to five. They don't get weekends off. They don't get holidays off. The horses are always dependent on the care that they give. And they're passionate about doing it,” Siegel narrates in the video. “The horses come and go. Each year it's another crop. But it's the same faces of passionate, hard-working farmers who are specialists at raising Thoroughbreds. Those are the people who are worth fighting for.”

“Jon did this strictly on his own–he wasn't prodded by any of us down here,” said Tom Ventura, President of OBS. “He had a genuine concern for what he saw developing. He came down here, came to some of the farms, came to OBS, went back to where he grew up and I thought he did a wonderful job of showing the people behind the industry. We see the race results and we see the sales results, but sometimes you don't see the people behind the scenes. It wasn't anybody's PR piece. It was genuine. That's the takeaway I have, and that's a story that needs to be told. These people's lives are invested in this.”

Siegel made sure to visit Little Hill Farm in Ocala. It especially resonates with him because that's where he worked his final Florida horse gig in the mid-1990s before embarking on a career in marketing and advertising. The final crop of yearlings he helped to prep for sales included Real Quiet, the eventual 1998 GI Kentucky Derby and Preakness S. winner.

Siegel underscored that the purpose of his video is only “political” to the point where he'd like it to be used to show legislators that a way of life exists that might not be apparent to them.

His line of reasoning dovetails with what a number of Thoroughbred owners and breeders have been trying to tell lawmakers for some time now: That pari-mutuel licensees that are trying to slough off the live racing requirements of their operations do not represent the Thoroughbred industry as a whole. In Tallahassee, it can be difficult for politicians to see beyond the pitches of lobbyists and deep-pocketed gaming corporations.

Although the complexities of Florida's gaming laws will very likely dictate what happens to Florida's horse workers, “the nuances of those gambling laws have very little to do with the day-to-day thoughts of the men and women working on the farms every day,” Siegel said. “Their immediate, day-to-day thoughts are along the lines of 'What's the best care that I can give to this mare that's about to foal.'

Several people in the industry in the Ocala area expressed praise for the project.

“He did a tremendous job with the video,” said Ocala Stud's J. Michael O'Farrell, who appears in the film. “I've known Jon since he was a little boy; his dad and mom trained horses at our farm years and years ago. He had memories from those days having worked down here, he knew we were having problems, and so he took it upon himself to lend a helping hand, and we appreciate it.”

“Ocala is the leading training center in the world. There wouldn't be an area in the world that would have as many horses train every day as here in Ocala. Before the decrease in the foal crop, there were 12,000 horses who went to a racetrack every day in Ocala six to eight months of the year. There are probably 65 racetracks in the area.

“We're having some difficulties down here with the decoupling talk, and as breeders, owners, trainers or a sales company, you can go to Tallahassee and talk to the politicians all you want,” he said, citing some strong political foes on the other side of the issue, including the Seminole Tribe. “They're very powerful politically and financially. So we need all the help we can get, and Jon played his part by putting out that video. Hopefully, it will do some good.”

Said Seigel, “I didn't want to say too much about decoupling itself in the video because I'm not a politician. I want to let the politicians do the political side of it. For me, I wanted to create a video that educates people on what the Thoroughbred industry really consists of. [Politicians] are out there representing the state and everything that's going on. But they don't really understand our industry.”

Those against the concept of allowing Florida's pari-mutuel licensees to get rid of live racing are getting ready to breathe a big-but temporary-sigh of relief. That's because the state's legislative session will be coming to an end Mar 11, and with each passing day it becomes more likely that legislators will take no action on a series of sweeping, multi-faceted gambling bills that were supposed to form the backbone of a 20-year, $3 billion tribal agreement known as the Seminole Gaming Compact.

Representatives of organizations like the Florida Thoroughbred Breeders' & Owners' Association and the Florida Horsemen's Benevolent and Protective Association have been cautioning their members not too exhale too deeply though, because the Thoroughbred industry is likely to face fresh attempts from gaming entities that want decoupling passed in 2017.

“I don't regret creating the video at all,” Siegel said when asked if his road trip might have occurred too late in the legislative process. “I am actually glad that the video is in the industry's hands, because now we have some time for more people to jump in there and start spreading the word and doing projects like this.”

Siegel said one of the most important points he tried to get across with the video didn't even survive the final cut during editing. But he wanted to try and articulate it for this article.