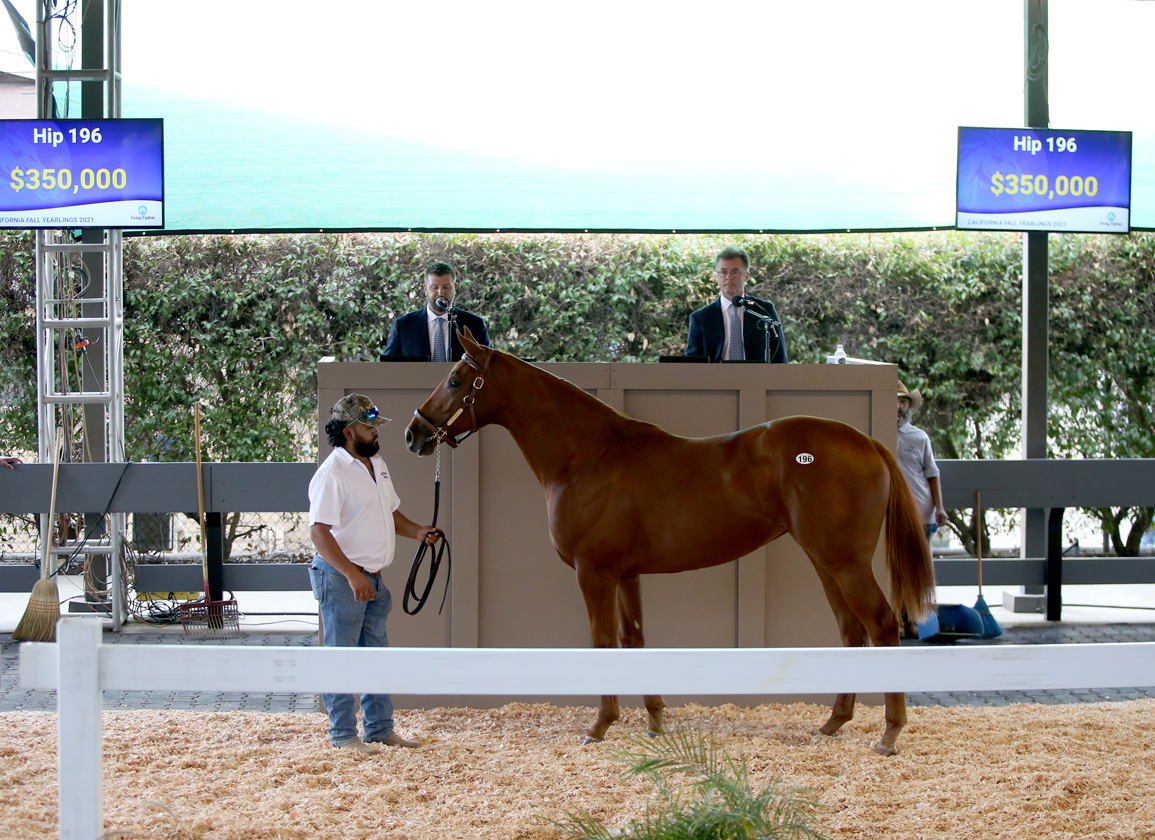 by Dan Ross and Jessica Martini

The third time proved the charm for the Fasig-Tipton California Fall Yearlings Sale, which produced the strongest results in its short three-year history with a session of lively bidding in Pomona Tuesday.

“Today was the most encouraging day we have had in California in a sales environment in the last three years that we've been  involved here,” said Fasig-Tipton President Boyd Browning. “There was a dramatic increase in the average and the median doubled from the sale last year and the RNA rate was down. But more important than that was the energy and the enthusiasm that I think everybody could sense at the sale. We felt pretty good with the pre-sale activity Monday and Tuesday morning. So today was very encouraging from that perspective.”

“First of all, we all have to keep in mind when comparing 2021 to 2020 results, that 2020 was a COVID year and this area was particularly hard hit,” Browning said of the upswing. “And 2020 was very difficult for most businesses, including Thoroughbred auctions. There was a drop off from 2020 compared to 2019, so I think there was some built-in recovery as we have seen in virtually every sale that there was comparable numbers for in 2021 compared to 2020.

Browning continued, “If you look around, the economy is strong and in racing handle is up, purses are up, there is a positive feeling, for the most part, in the racing  industry throughout the United States and that is certainly a factor. And some breeders answered the call and supported us with higher quality horses this year than they have in the past.”

Another Pharoah for Beckerle

Tom Beckerle, who already has a stakes winner by American Pharoah, purchased another filly by the 2015 Triple Crown winner for a sale-topping $350,000 Tuesday at the Fasig-Tipton California sale. The yearling (hip 196) was bred by Terry Lovingier and was consigned by his Lovacres Ranch. In partnership with Lovingier and Amanda Navarro, Beckerle campaigns Fi Fi Pharoah (American Pharoah), who won the Melair S. in June.

“I have some partners that wanted to get an American Pharoah,” Beckerle said. “We liked her for breeding down the road and Fi Fi Pharoah has already made us a couple hundred thousand dollars. We think this one can do the same thing.

We will see what happens.”

Hip 196 is out of the unraced Ez Indy (A.P. Indy), who is a half-sister to champion Banshee Breeze (Unbridled). The mare, in foal to Animal Kingdom, was purchased by Lovingier for $85,000 at the 2016 Keeneland November sale.

Beckerle, based in Fallbrook, California, purchased three other yearlings from the Lovacres Ranch consignment Tuesday. He acquired a colt by Stay Thirsty (hip 134) for $100,000 and a pair of fillies by the GI Travers S. winner (hip 8 and hip 31) for $50,000 each.

Trainer Brian Koriner, bidding on behalf of Samantha Siegel's Jay Em Ess Stable, got the Fasig-Tipton California sale off to a quick start when purchasing a filly by Practical Joke (hip 10) for $300,000. The yearling was consigned by Barton Thoroughbreds and was bred by Richard Barton Enterprises, which purchased her unraced dam Miss Lavinia (Speightstown) for $4,200 at the 2016 Keeneland November sale.

“She is by Practical Joke and she is out of a Speightstown mare,” Koriner said of the yearling's appeal. “She's bred to be very fast and maybe early and precocious.”

Jay Em Ess Stable was making its first purchase of the yearling sale season, according to Koriner.

“She is very excited,” he said of Siegel. “She hasn't bought any yearlings all year, she waited and she's very excited to get a Cal-bred by Practical Joke.”

Barton Thoroughbreds also had sales success Tuesday with a filly by Palace Malice (hip 79) who sold for $135,000 to Legacy Ranch. The operation purchased her dam, Smiling Cruise, with this foal in utero, for $22,000 at the 2019 Keeneland November sale.

Ocala horsewoman Danzel Brendemuehl returned to her California roots to purchase a colt by Nyquist (hip 83) in the name of her Classic Bloodstock as agent for partners Sasulito and Breckenridge Bloodstock in Pomona Tuesday.

“We loved everything about him,” Brendemuehl said. “He's by Nyquist, he's a California-bred and he's a very nice colt. We are probably  going to pinhook him in a Fasig-Tipton sale–probably Miami.”

Brendemuehl did not rule out a return trip to California for the yearling.

“California needs a 2-year-old sale and Boyd Browning is working real hard with Fasig-Tipton to make it happen,” she said. “If it happens, we'll be here with that colt and we'll top the sale.”

Hip 83 is out of Soul Crusader (Fusaichi Pegasus), a daughter of graded winner Michigan Bluff (Skywalker). He was consigned by Woodbridge Farm and was bred by Bud Petrosian who purchased the mare with this foal in utero for $22,000 at last year's Keeneland January sale.

Also Tuesday, Brendemuehl also purchased a colt by Smiling Tiger (hip 44) for $27,000. Coleen Smith's Breckenridge Bloodstock returned later in the session to acquire a filly by City of Light (hip 208) for $170,000.

Slugo Racing Gets in on the Light'

Steve Gasparelli's Slugo Racing added a colt by in-demand young sire City of Light to its roster when acquiring hip 171 for $260,000 Tuesday in Pomona.

“We like the City of Lights,” Gasparelli, who did his bidding alongside trainer Mike Puype, said. “We think he has a lot of potential as a stallion. And I really liked the way this colt looked, very correct. And the mare has dropped winners already. We only came for a couple and he was on our short list.”

The yearling is out of Chicalelee (Cherokee Run) and is a half-brother to stakes-placed Touchdown Brown (Cairo Prince). He was consigned by Bruno DeBerdt's Excel Bloodstock on behalf of his breeder, PT Syndicate #1 LLC.

Three years ago, Dan Blacker was an underbidder on a yearling by Square Eddie out of North Freeway (Jump Start), but the trainer would not be denied for the colt's full-brother, going to $200,000 Tuesday to acquire hip 30.

“I was underbidder on the brother two years ago to Simon Callaghan, so I am kind of glad that he didn't show up today and I got to buy this one,” Blacker said after signing the ticket on behalf of a partnership of owners.

The bay yearling was bred by Thomas Bachman and was consigned by his Fairview LLC. Stakes-winning North Freeway is already the dam of stakes winner and Grade I placed Take the One O One (Acclamation) and the Callaghan-trained stakes winner Square Deal (Square Eddie).

“He looks really solid,” Blacker, who did his bidding alongside Boomer Bloodstock's Craig Rounsefell, said of the yearling. “He looks like a really sound horse that is going to be fun for our partners. And it's a good family, the mare is great and he really looked really solid soundness wise and soundness is so important these days. Hopefully we will get him to the races at Del Mar next summer and go on from there.”

Neal and Pam Christopherson, owners of Bar-C Racing Stables, enjoyed a quick return on their investment in the mare Joyce and Me (Discreet Cat) Tuesday. The couple purchased the mare, in foal to Stanford, for just $1,000 at the CTBA January sale in 2020. They sent the mare's Stanford filly (hip 230) through the ring in Pomona to sell for $100,000 to Slugo Racing.

“That's a nice return on the investment. I like to gamble on stuff that looks like that,” Neal Christopherson said.

Joyce and Me produced a filly by Stanford this year and was bred back to Harbor the Gold.

Bar C Racing Stables was already coming off a big score in the sales ring this month. As part of a foal-share, the operation sold a filly by Uncle Mo out of Fresia (El Prado {Ire}) (hip 371) for $700,000 at the Keeneland September sale. The Christophersons purchased Fresia for $35,000 at the 2015 Keeneland November sale. She was carrying subsequent multiple stakes winner Galilean (Uncle Mo) at that auction.