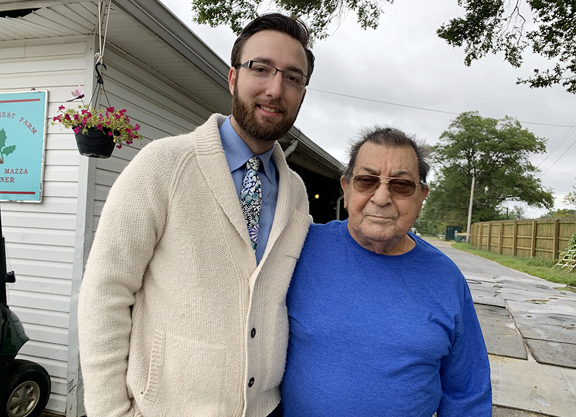 Trainer John Mazza, a regular at Monmouth Park since the track opened in 1956 and one of the most beloved members of the New Jersey racing fraternity, passed away Friday. He was 82.

According to his companion, Rosemary Shockley, Mazza died from complications related to congestive heart failure. He passed away at Aventura Hospital in Aventura, Florida.

“It’s so sad to learn that he passed. He was a great man,” said New Jersey Thoroughbred Breeders Association Executive Director Mike Campbell.

The Mazza stable had one of its best years in 2019 thanks to the filly Horologist (Gemologist). Owned at the time by Cameron Beatty, the New Jersey-bred won the GIII Monmouth Oaks and finished third in the GI Cotillion S. Horologist was bred by Vincent Amarella’s Holly Crest Farm, a New Jersey-based breeding and racing operation that employed Mazza for more than 60 years.

“He was like a father to me,” Beatty said. “He was the greatest man I have ever met in my life. I haven’t gotten any sleep and there have been a lot of tears. But John wouldn’t want that, he wouldn’t want us shedding tears. He would want us celebrating his life.”

Starting when he was seven, Mazza worked on his father’s boarding farm in Wayside, New Jersey, before gravitating to the racetrack. He worked as an assistant trainer to Joe Kulina and later took over as the head trainer of the string Kulina would send to the New England tracks each summer. Mazza went out on his own in the seventies.

“It was ingrained in his blood since he was a boy,” Shockley said. “His father had a farm when he was a boy and that’s where it all started. He just loved horses. That was his whole life. He ate, drank and slept horses. His whole life revolved around that.”

“John Mazza was a great horseman and a great guy,” said longtime friend and bloodstock agent Steve Young. “He treated his horses like kings. Rest in peace, my friend.”

Mazza enjoyed success at the highest level in 1992 when he won the GI Hopeful S. with Great Navigator. Twenty-six years later, Horologist came around, breaking her maiden by 20 3/4 lengths before going on to stakes success. The filly had given new life to an octogenarian trainer who still got up every morning at 4 a.m. to begin his work day, which included overseeing his horses at Monmouth and those at nearby Holly Crest Farm.

“I took my time with her,” Mazza told the TDN last year. “She never had any problems, but I wanted her to grow more and she did. Sometimes there has been a long time between her races, but she runs better fresh. The Beyer numbers go way up when she runs fresh. I took my time and the owner let me do that. That’s the way you’re supposed to do it. That’s what I learned from Joe Kulina.”

After Beatty sold shares in Horologist she was transferred to trainer Richard Baltas.

In 2012, Mazza won the Virgil “Buddy” Raines Distinguished Award, which is given out annually at Monmouth to an owner or trainer who has distinguished themselves with their exemplary conduct and integrity.