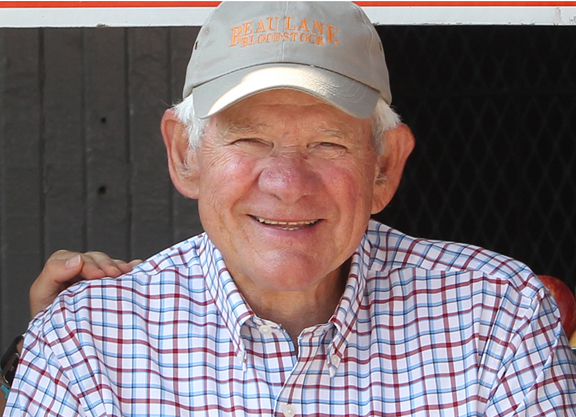 Beau Lane has been in the horse business for half a century. He came to Lexington 23 years ago with six broodmares in tow and $50 in his pocket. Not long after, three of those mares became stakes producers–a harbinger of things to come.

Since then, the veteran horseman has grown his band of breeding stock and now has 30 broodmares at his Woodline Farm near Paris.

While he's never been able to sign tickets on million-dollar broodmares, he said he doesn't find it necessary.

This year, Beau Lane Bloodstock's offered six yearlings for Book 1 at Keeneland September. While none approached the coveted seven-figure mark, for Lane it was a successful two days of sale.

His first yearling to go through the ring, a colt by Flatter bred by Lane in partnership, brought $330,000 from Ben Glass, on behalf of Gary and Mary West.

“This colt was about as nice of a Flatter that you're ever going to see,” he said. “He had a way of moving that would catch your attention. A lot of people looked at him because they knew the family.”

The colt is out of the Smart Strike mare Abraqat, a daughter of dual Grade I winner Spun Sugar (Awesome Again). Lane picked up the mare in foal to Albertus Maximus at the 2016 Keeneland November Sale for $55,000.

The mare had gone through the ring during the 11th of 13 sessions of the sale. Lane said he had not been planning on bidding that day.

While recounting the purchase, Lane nodded toward the back walking ring at Keeneland and said, “If you just wait up there until you see 'that one,' it doesn't have to be the first day, the second day, or even the first week, but when you see that one walk up and you get that feeling, go for it. They're the ones that will make you money.”

Hip 29 was easily the most expensive of the mare's three foals Lane has led over to the sales thus far. The Albertus Maximus filly Abraqat was carrying at the time of her purchase made $20,000 here two years ago, while the mare's colt by Carpe Diem fetched $65,000 last September.

During the second day of Book 1 this year, a yearling filly by First Samurai out of the unraced Unbridled's Song mare Team Hansen sold for $250,000.

Lane purchased Team Hansen in 2014 at the Keeneland November Sale for $75,000. Two years ago, her Into Mischief filly brought $600,000, the highest-priced yearling Lane has ever sold, and last year, her Awesome Again filly brought $185,000.

Of this year's First Samurai yearling purchased by Frankie Brothers as agent for Bruce Lunsford, Lane said, “Frankie trained First Samurai [for Lunsford and Lansdon Robbins III] and when we pulled her out he said, 'Woah, she looks just like the old man.' She was the real deal–a lot of presence, a lot of class. We knew she was going to be one of the top-selling First Samurai yearlings.”

The filly was the only representative for her sire in the first two books of the sale.

Lane said he prefers to match his mares to stallions that will complement the mare best, rather than always breeding to the traditional commercial sire.

“I spend a lot of time on it. I try to take a young mare to a proven horse when I can, but I will sometimes do the opposite if the pedigree fits,” he explained. “My son-in-law is always telling me I need to breed to more freshman sires because that's where the market is. I will do that, but I have to see the types match and have the pedigree come together. If you can get on a stallion's train, like Into Mischief, like Constitution, they will take you far and fast.”

On finding the right mares for his program, Lane said he relies on advice he received years ago from the late Marvin “Junior” Little of Newstead Farm in Virginia.

“Junior told me many years ago, 'Beau, you can buy mares that aren't stakes producers, but you've got to have a great family.' So all the mares in our operation are from great families,” he said.

A Virginia-bred himself, Lane got his start in the horse world with show horses.

“I once had the national champion Appaloosa stallion,” he recalled. “I got started breeding Appaloosas and Quarter Horses. But then I found the best Quarter Horses I had were out of Thoroughbred mares. I just kept looking for better and better horses, and I think somebody that does that will end up with a Thoroughbred. The business has been awfully good to me. I've been very blessed that I've been around good horses and good people.”

For Lane, his greatest pride comes when people seek out horses from his consignment.

“We had a lady come by the other day shopping through Book 2 and she asked what we had,” he said. “When I told her we didn't have anything, she said, 'That's a shame. I'd rather buy a horse from you than anybody because you raise good horses.' So that always makes you feel good. We really take pride in the horses we raise. We try to be straight with people and we'll tell them anything we know. We want to represent a good horse,” Lane added. 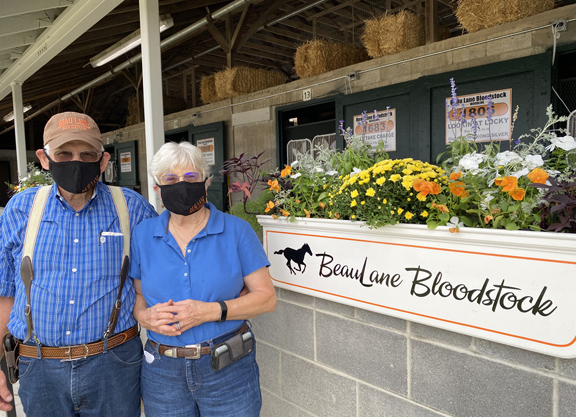 The Beau Lane Bloodstock consignment is a family affair. His daughter J.B. Orem can be found at the end of a shank throughout the day, while Lane's wife Gail and son-in-law Michael assist with the many tasks of running the consignment. Before long, the next generation will be lending a hand.

“I have a grandson learning the business and I'm trying to keep him in it,” Lane said with a proud smile. “I feel there's no better business in the world than the horse business.”

Even in the current climate, Lane said he has confidence in the horsemen and women that make up the industry.

“The way the market is going now, I think it's going to correct itself if we don't make it more difficult,” he said. “There are a lot of young people coming in that are very intelligent. I see a lot of people that started 15 or 20 years ago that have really sharpened their tools and have gotten really good at what they do. I'm tickled to death for them.”

He cautioned that the industry needs to do better in supporting the underdogs of the business.

“There's a lot of really good horsemen that feed this industry,” he noted. “From what I can see, we have a tendency to make it harder for them. They have a right to enjoy this just as much as anybody because they work just as hard. To me, money should not qualify you to have a good horse.”

Lane has raised several graded stakes contenders, including dual GISW Carpe Diem (Giant's Causeway) and this year's talented undefeated juvenile Jackie's Warrior (Maclean's Music). But he's still searching to find a top-class horse to race under his own banner. Luckily, he has a few prospects in the pipeline.

When his Gun Runner colt out of the Grade II-placed Blip n'The Bye (Tale of Ekati) did not meet his reserve and was led out unsold at $435,000 during Book 1, Lane said he was a bit relieved.

“I've had that family for four generations and I liked him so much from the time he was born. I really didn't want to sell him so I put a high reserve on him,” he admitted. “We came within $5,000 of our reserve. But he's one of the very nicest horses I've raised in the last 25 years. I don't think I'm going to wait for the next one, so I want to keep him and race him.”

The 78-year-old horseman said he finds no place for himself in an “old folks home” until he has reached his ultimate goal.

“I came from a little red-clay farm in southern Virginia. I had a dream. I wanted to raise a really great horse. I've raised a lot of really good horses, but I still haven't raised that great horse yet. I'm running out of time, but I'm getting closer.”