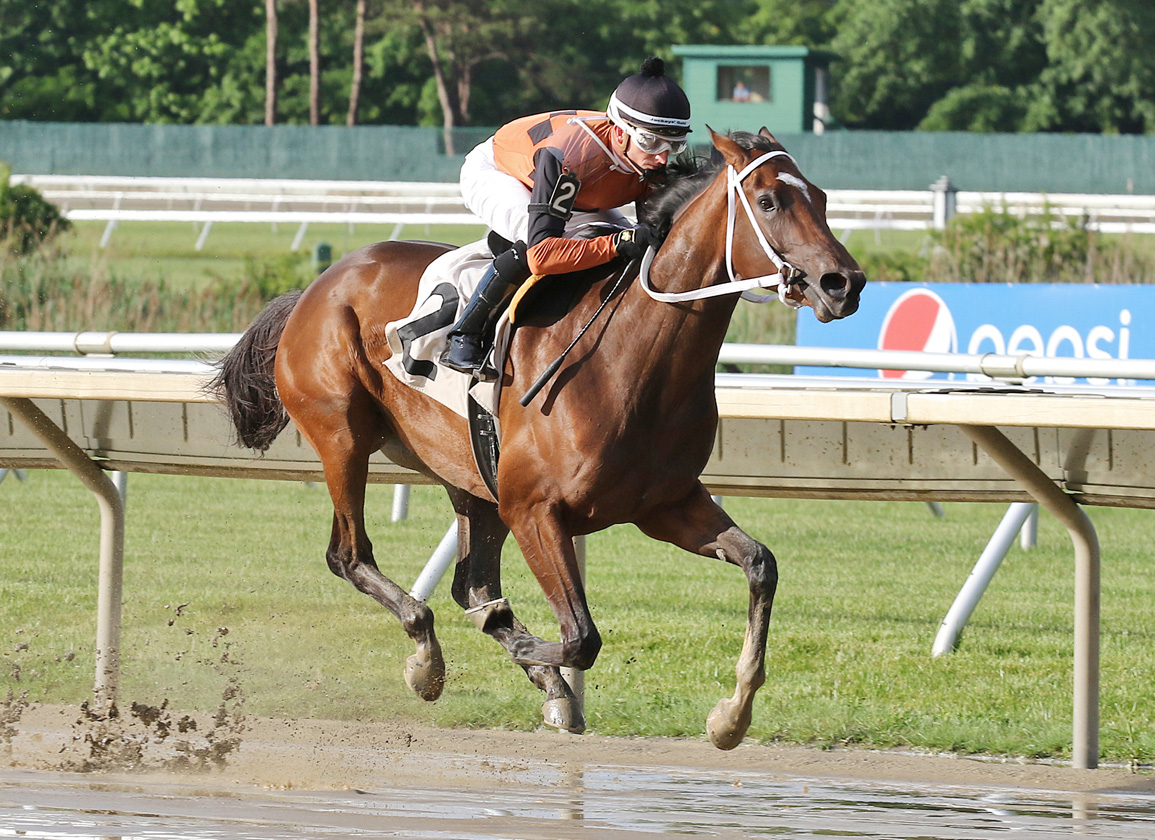 Swilcan Stable and LC Racing's Mainstay (Astern {Aus}), the half-sister to last year's champion 2-year-old filly Vequist (Nyquist), MGISW, $1,237,500, came out running Friday to become her sire's first Northern Hemisphere winner as well as a 'TDN Rising Star'. Scratched from Thursday's Astoria S. at Belmont, the Butch Reid pupil was backed at 6-5 and made that price look like a bargain.

Out-footed by Next Tuesday (Kantharos) from the gate, the bay quickly rushed up and cleared by several lengths from that foe. Next Tuesday tried to make a race of it into the stretch, but Mainstay was in another league as she cantered home a super-impressive 7 3/4-length winner, stopping the clock in :52.59.

“She was very classy. She handled it like a professional,” said winning rider Frankie Pennington. “The first time Butch asked me to breeze her he said `you're going to like this one.' When he says that you know the horse has a chance to be something special.”

Reid said, “She has been training lights out. She's much more of a sprinter than Vequist was so we knew she would be good early. It's been fantastic. We had thought about trying her in the Astoria Stakes at Belmont Park, but we took the more conservative route and I'm glad we did… I've got owners who will listen to me on these type of decisions and it will pay dividends in the long run.”

Astern (Medaglia d'Oro), a Group 1 winner in his native Australia, covered his first mares at Darley's Kelvinside in New South Wales before reverse shuttling for the first time at Jonabell in 2018. He has six Southern Hemisphere winners. Fillies from Astern's first North American crop have been well received this season, with $375,000 and $340,000 sellers.

Mainstay is the fourth foal out of 2014 GII Black-Eyed Susan S. runner-up Vero Amore (Mineshaft), a $15,000 bargain buy by Tom McGrath's Swilcan Stables. Vequist was beaten a nose in her Parx debut last July before Gary Barber and Wachtel Stable bought in. She proceeded to romp by 9 1/2 lengths in the GI Spinaway S. before finishing second in the GI Frizette S. and securing championship honors with a convincing score in the GI Breeders' Cup Juvenile Fillies. Eased in the GII Davona Dale S. in February, Vequist is targeting the GI Cotillion S. in September. Vero Amore produced a Daredevil filly last term and an Accelerate filly most recently.