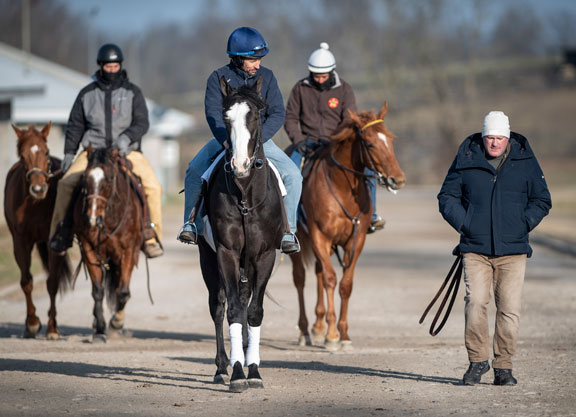 Last summer, in the midst of guiding the best horse he had ever trained, Dame Malliot (GB) (Champs Elysees {GB}), through a Group 1 campaign, trainer Ed Vaughan announced that he was shutting up shop at his Machell Place Stables in Newmarket, citing the economic difficulties of being a smaller trainer in Britain. Later in the season, the Irish-born Vaughan revealed that he was relocating to America to train from Keeneland Racecourse.

While the move means Vaughan's string has shrunk from 25 in Newmarket down to seven as he gets started in the U.S., the trainer said he will have access to much larger purses in Kentucky with significantly fewer overhead costs. The average purse per race in Kentucky in 2019 was $64,350, and the average annual earnings per starter $31,997.

“The move to America was something that was on my mind for quite a while,” Vaughan said at Keeneland last week. “The way the economics of racing are at home-the prizemoney, renting yards, the expense of it-it just didn't make any sense. And I wanted to [move] now rather than having to do it later on because I'd be getting too old later on and it was one of those things that I thought it was a now or never situation. I also thought I had a nice collection of horses to take. We have four maidens we've brought over, fast-ground horses that I think will suit America very well.”

“You don't make a lot out of the day rate [in England]; you have to rent your yard and pay business rates,” Vaughan added. “Everything is expensive and you get very little out of it when you're training 25 horses, which is pretty much the bracket we were in. I was fortunate to have some good owners in that 25, but the economics of it are very tough unless you're winning good races. The only way really to make money out of it is by selling them, but you're selling your best horses so it's a Catch 22.”

At Keeneland, Vaughan can pay only for the stalls he needs.

“I think it makes a lot more sense here,” he said. “We have to pay for the barn while there isn't any racing on, but it's significantly less than what your overheads would be in England, and you're racing for very good prizemoney. You cut your cloth accordingly; if you don't have a full barn you can rent stalls.”

Additionally, Vaughan said he thinks there are wider opportunities to access quality bloodstock in America.

“The American scene has always fascinated me,” Vaughan said. “I've always watched a lot of racing from the States and followed it and I just think there are a lot more opportunities. It's very polarized in England and there are very few big players there, and it's tough if you're not training for the Juddmontes and those. You have a lot more independently wealthy people [in America], and a lot more of the best horses here go to the sales, a bit like Australia, whereas a lot of the best horses in Europe, I'm afraid, are homebreds and they never show up at public auction. I think you have a better opportunity of buying a good horse at the yearling sales here than you would probably anywhere in the world.”

In addition to Anthony Oppenheimer's G2 Prix de Pomone and G2 Princess of Wales's S. victress and triple Group 1-placed Dame Malliot, Vaughan executed the career of Alan Pickering's G3 Winter Derby winner Robin Hoods Bay (GB) (Motivator {GB}). Meanwhile, Vaughan also developed a good reputation for preparing horses to be sold on to other jurisdictions like Australia, Hong Kong and America, something he said 'we had to do to survive.' And while he said he wouldn't rule out continuing to trade horses in his new guise, he is surely looking forward to more opportunities to keep his better runners under his thumb.

Though Keeneland won't see racing action until April and training is restricted to the facility's training track for the dark winter months, the backstretch is bustling with humans and horses alike. Just before the sun broke to evaporate the frost that had been lain down in subzero temperatures the night before, Vaughan was overseeing the exercise of Lemon And Diem (Carpe Diem), a 4-year-old gelding owned by Phoenix Thoroughbreds who he expects will be his first runner in a few weeks' time. The rangy chestnut had previously run three times for trainer Steve Asmussen, most recently finishing third in a $28,000 maiden claiming race (purse of $30,000) at Churchill Downs on Nov. 27. Maiden special weight races are being run at the current Turfway meet for $32,000, with lesser purses available for maiden claimers at various levels. Maiden special weights at the competitive Keeneland meet last autumn were worth $70,000.

“We've had [Lemon And Diem] gelded and he's moved here and looks fantastic; he's a big, lovely looking horse,” Vaughan said. “We'll probably take him for a racecourse gallop up to Turfway next week and then it'll probably be about two weeks after that he should be ready. He's a big, laid-back character so I want to see how he works up at Turfway and see how much he'll come on from it and then we'll make a plan. He looks like he'll be our first runner, all being well.”

“She's a lovely big filly that I didn't get to run [in Britain] and I think she'll suit over here,” Vaughan said.

Miss Chess (Ire) (Zoffany {Ire}) is another well-bred 3-year-old, she being a half-sister to last year's G1 Prix de Diane and G1 Nassau S. winner Fancy Blue (Ire) (Deep Impact {Jpn}) bought by Phoenix for €220,000 at Arqana August and races for the Phoenix Ladies Syndicate. Miss Chess was third on debut last July at Yarmouth before finishing off the board at Goodwood and Newmarket over ground that likely didn't suit.

“The Zoffanys have done really well over here and she's a neat filly who loves fast ground,” Vaughan said. “She should have won first time out, she jumped the road and was a bit slowly away and stayed on really well. Hollie Doyle rode her that day and she thought she'd won the photo, but it didn't happen. She's still a maiden and she'll suit over here as well; we'll probably start her off in a maiden at Keeneland all being well.”

Also for Phoenix is the 4-year-old gelding War Cross (War Front), a son of the GI E.P. Taylor and G2 Ribblesdale S. winner Curvy (GB) (Galileo {Ire}) from the family of Classic winners Footstepsinthesand (GB) and Power (GB). War Cross ran three times in Britain last summer and was placed on his two most recent runs. War Cross was making his second transatlantic flight when returning to his birthplace, having been sold at Keeneland for $200,000 as a yearling.

“War Cross is a horse I'm very excited about,” Vaughan said. “He's a War Front out of Curvy and his best run was his last run at Wolverhampton, where he was second [to prior winner Faisal {GB}] and there was 15 lengths back to third. I think he'll be a nice maiden to run up here, he loves fast ground and he's been gelded since.”

Another that will enjoy fast ground is the 4-year-old gelding Inhalation (GB) (Bated Breath {GB}). He won shortly after British racing's resumption last June at Yarmouth and was placed three times from a further five runs over seven furlongs last year.

“Inhalation has only won one race, a small handicap at Yarmouth, but the ground was like a road that day, it was the first day back [at Yarmouth] after Covid and the track hadn't been watered and he really excelled on that,” Vaughan said. “He was drawn 13 and Wolverhampton is a very tough, tight track. Hollie [Doyle] had to use him up quite a bit to get there. He's a horse I'm excited about, he's a Bated Breath and they seem to do very well with a bit of time and fast ground. He's one I'm looking forward to running up here at Keeneland.”

Vaughan scooped up the 5-year-old mare Alnaseem (GB) (Shamardal) for 88,000gns at Tattersalls in December after she had run fifth, beaten three lengths, in a listed race at Lingfield. Alnaseem won two of her seven starts last year going a mile at the handicap level, and Vaughan said he hopes she will be stakes class in the U.S.

The American import that followers of Vaughan's stable may be most looking for an update on is one of the smaller four-legged variety: the trainer's popular Black Labrador Louis. Vaughan reported that Louis has arrived in Lexington in good order and is embracing his new home.

“When I said I was moving, everyone was saying to me, 'well, where is Louis going? Is he going with you?'” Vaughan said. “The dog is a bit of a character. Even when I arrived over, everyone was like, 'you're the guy with the Black Labrador. So he's better known than I am, I'm afraid. But it's great to have him over here, he arrived last week.”

Vaughan clearly has plenty to look forward to as winter melts into spring in Kentucky. In the meantime, he has been settling in in Lexington and familiarizing himself with the local fare.

“The people here have been wonderful. They've been so welcoming, there's a great expat community some of which I've known. People can't be helpful enough to you; I'm blown away by the warm welcome they've given us while we've been here. It's fantastic. I'm delighted to be here.”