Van Beethoven To Stand In France 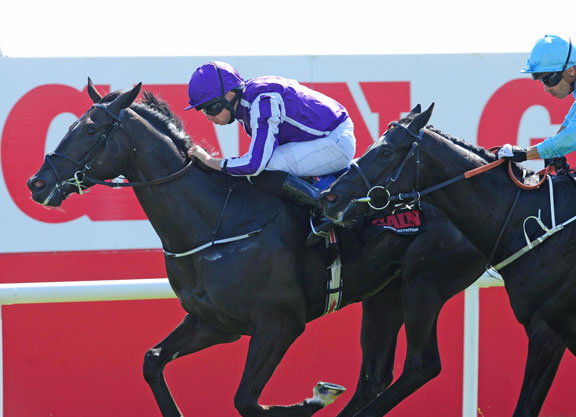 G2 Railway S. winner Van Beethoven (Scat Daddy-My Sister Sandy, by Montbrook) has been retired from racing and will stand at Haras de Grandcamp in 2021.

Van Beethoven ran eight times at two for trainer Aidan O'Brien in the Michael Tabor silks, winning twice including the Railway. He was second, beaten a length, in the GI Secretariat S. at Arlington Park the following summer and hasn't run since the 2019 GI Shadwell Turf Mile at Keeneland.

Van Beethoven is out of a full-sister to the dam of triple Grade I-winning mare Stopchargingmaria (Tale of the Cat).

Samuel Blanchard of Winning Bloodstock told Jour de Galop, “He comes from a classic American line and won the Railway S. at The Curragh in June of his 2-year-old career, running no less than eight times between April and September. This is a real guarantee of precocity, at a time when France Galop is upgrading the juvenile category. At three, he finished second in the Secretariat S. over a mile at Arlington Park. He is a horse that travelled a lot, having raced in Ireland, but also in England, France, Dubai and the United States.”

“Van Beethoven didn't win a Group 1, but was a top 2-year-old,” Blanchard added. “Among the five best sires of juveniles in France this year, four had not won a Group 1. This is also the case with Mehmas, the leading first-season sire in Europe. Coolmore has [retained] a significant interest in him, while 15 shares will be on the market. Van Beethoven is an exceptional model: a good size but not too big. Like his father, we can expect him to bring precocity and quality.”