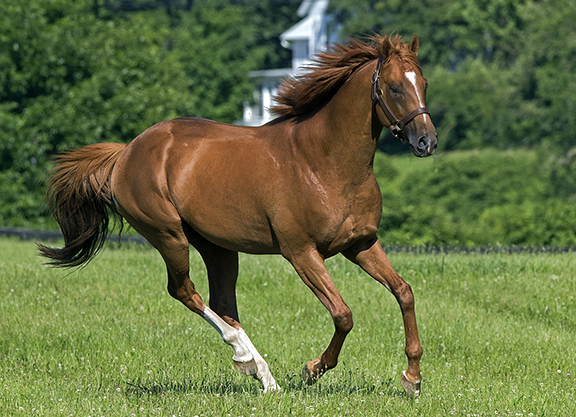 Grade I-winning millionaire V. E. Day will be represented by his first crop of Kentucky-bred yearlings at the upcoming Fasig-Tipton Kentucky October Yearlings Sale scheduled to be held Oct. 26 through 29.

Owned by Magalen Ohrstrom Bryant, the son of English Channel won the Curlin S. at three before capturing the 2014 GI Travers over Wicked Strong (Hard Spun). At four, he ran second in the GII Brooklyn Invitational S. He stood his first season at stud at Waldorf Farm in New York before relocating to Doug Arnold's Buck Pond Farm for the 2018 season.

Arnold says that while V. E. Day hasn't yet bred an abundance of mares, his first few crops have proven to be classic-looking individuals.

“As a group, they're very good,” Arnold said. “He's producing size in his foals, as well as big shoulders and big hips. They look like they'll be able to run late in their 2-year-old year and be more of two-turn-type horses going forward. All the foals look like him. He's a beautiful horse. All the things you need to have to be a good sire–wide chest, plenty of bone, good feet–he's throwing.”

Arnold added that he believes the millionaire's pedigree has all the makings of a successful sire. His second dam, Our Dear Sue (Roberto), is a stakes producer and full sister to Champion grass horse Sunshine Forever.

“V. E. Day comes from a great stallion family,” Arnold said. “The blood in the family is impeccable. English Channel has ended up being a great sire of horses that have an outstanding turn of foot on the turf. A lot of the genetics on both sides are incredibly strong towards producing a big-time stallion.”

Six yearlings by V. E. Day will be offered through the Buck Pond consignment at the Kentucky October Yearlings Sale.

Arnold said that while the entire group shows promise, he finds Hip 116 to be a particular standout.

The yearling filly is out of the Irish-bred mare Hope Cross (Cape Cross), a Grade III-placed winner of over $250,000 that hails from the family of British-raced Group 3 winners Sir Ron Priestley (Australia) and Subjectivist (Teofilo).

“Hope Cross is a lovely mare and this filly is a very classic, two-turn-looking filly that I think is a great representation of the best parts of V. E. Day,” Arnold said.

Johnathan Miller serves as advisor to Bryant and co-owns a Fasig-bound yearling with the stallion owner. The colt out of the Holy Bull mare Holy Beast will sell as Hip 105.

“This is only her third foal, but Doug told me he's an absolutely awesome-looking horse,” Miller said. “Of the six V. E. Day yearlings that are selling, this is one of the ones we're highest on.”

While the dual stakes winner shone brightest on the dirt, V. E. Day was also a winner on the turf and his sire line shows all the potential for him to pass on such versatility.

“We're hoping that not only can they  be precocious enough to win at two, but also that they can follow in their father's footsteps and be able to run a Classic distance,” Arnold said. “Hopefully they'll run on the dirt and the turf as the English Channels have.”