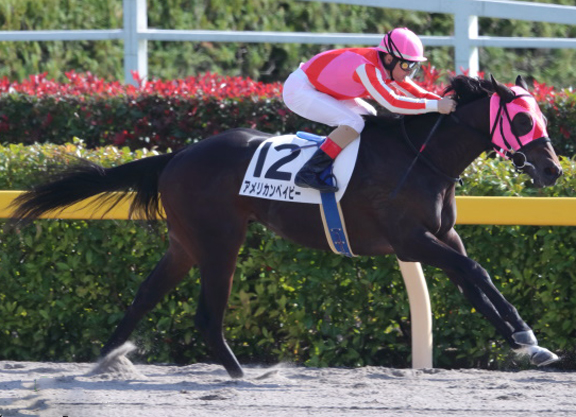 In this continuing series, we take a look ahead at US-bred and/or conceived runners entered for the upcoming weekend at the tracks on the Japan Racing Association circuit, with a focus on pedigree and/or performance in the sales ring. Here are the horses of interest for this weekend running at Kyoto and Nakayama Racecourses:

6th-KYO, ¥13,830,000 ($126k), Allowance, 3yo, 1800m
AMERICAN BABY (JPN) (c, 3, Bernardini–Nile Queen, by Pioneerof the Nile) is out of a half-sister to 2016 GI Preakness S. hero Exaggerator (Curlin) and was purchased in utero for $525K at KEENOV in 2016 before fetching ¥29 million ($254k) from owner Katsumi Yoshizawa at the 2017 JRHA Select Foal Sale. A touch green when scoring by five lengths at first asking at Tokyo Nov. 2 (see below, SC 12), he makes his first start since finishing down the field behind the impressive Dieu du Vin (Jpn) (Declaration of War) in the Nov. 23 Cattleya Sho at headquarters. Also making his 3-year-old debut is Full Flat (Speightstown), last seen finishing a respectable fifth in the GI Breeders’ Cup Juvenile. B-Queens Ranch Ltd