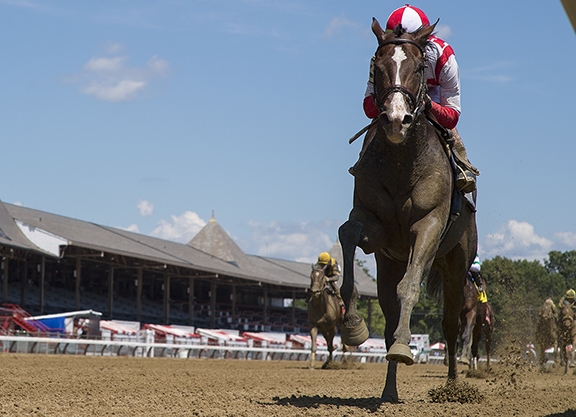 The Saratoga opener Saturday was one of those vintage events in which virtually every firster was touted as a runner, and it was Klaravich Stables, Inc.’s Reinvestment Risk (Upstart) who emerged as the best of the bunch while becoming his freshman sire (by Flatter)’s third winner and first ‘TDN Rising Star’. A $140,000 FTKJUL yearling turned $280,000 OBS March acquisition off a strong :20 4/5 breeze, the bay joined the Chad Brown barn at Payson Park this spring before stints at Monmouth and most recently locally.

Off at 4-1, he broke in midpack and was pushed along by Irad Ortiz, Jr. to grab a foothold at the rail just off the pace. Second timer Windcracker (Super Saver) showed increased speed to seize a clear lead through an opening quarter of :22.79, but he left the rail open for Reinvestment Risk turning for home and the colt came through willingly to take over after a :46.14 half. The race was won at that point, and Reinvestment Risk poured it on in the stretch to run up the score to 7 3/4 lengths and stop the clock in1:09.95 after finishing up in a snappy :23.72. Windcracker held on for second over Olympiad (Speightstown–Tokyo Time), the seemingly less fancied half of a 7-5 entry with eighth-place finisher Outlier (Not This Time).

Upstart was a 5 1/2-length debut winner at Saratoga himself before adding the Funny Cide S. for New York-breds here nine days later for owner Ralph Evans and the late Rick Violette, Jr.–who at one point campaigned many of Klaravich’s most precocious babies. Twice Grade I-placed to complete his juvenile season, Upstart added the GII Fountain of Youth S. at three and GIII Razorback H. at four before retiring to Airdrie Stud. In addition to his three winners, Upstart is responsible to Belterra’s Hoover S. runner-up Uptown.

Reinvestment Risk was one of two Upstart colts purchased by agent Mike Ryan at OBS March–he also bought $600,000 Founder, who is training towards his own debut up at the Spa, for fellow Chad Brown clients Jeff Drown and Don Rachel.

Reinvestment Risk is the second foal out of a four-time winning daughter or Candy Ride (Arg) who was acquired by breeder Gerry Aschinger for just $6,000 at the 2016 Keeneland January sale. Dam Ridingwiththedevil, who’s out of a half-sister to MGSW My List (Banker’s Gold), produced a Strong Mandate filly in 2019 and Stormy Atlantic colt earlier this term before being bred to Audible for 2021.