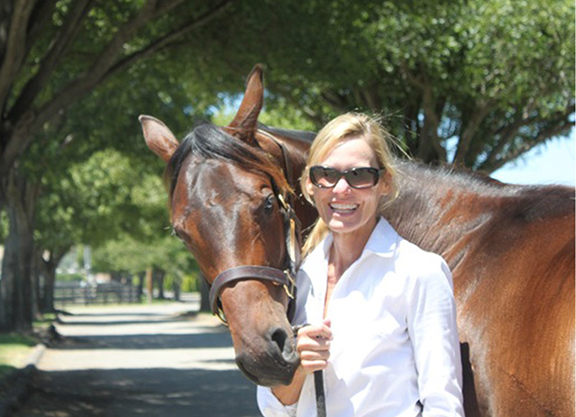 Jan Vandebos and her late husband Robert Naify paid a visit to Coolmore on a trip to Ireland several years ago, fueling a desire to seed her high-quality broodmare band with a mare by the world's most dominant stallion. That rendezvous set in motion a chain of events that will see the RanJan Racing-bred Congratulation (American Pharoah), the former 'TDN Rising Star' Monarch of Egypt, take part in one of the world's richest age-restricted events, the HK$24-million (US$ 3.09 million) BMW Hong Kong Derby (NH/SH 4-year-olds only, 2000mT) Sunday afternoon at Sha Tin Racecourse.

“I fell in love with Galileo (Ire) and Montjeu (Ire), when he was still alive on our visit,” she said. “We were just getting started in bloodstock and studied the pedigree and we had decided at the time that we wanted to find a great Galileo mare. I looked for six or seven years at mares that were presented to me from Europe and I didn't see anything I liked.”

That all changed when Galileo's then newly turned 6-year-old daughter Up (Ire) was entered for the 2015 Keeneland January Sale. A half-sister to Group 1-winning juvenile and sire Dutch Art (GB) (Medicean {GB}), Up–fourth to Stephanie's Kitten (Kitten's Joy) in the 2011 GII Breeders' Cup Juvenile Fillies' Turf–was runner-up for the Coolmore ownership group in the 2012 G1 Poule d'Essai des Pouliches (French 1000 Guineas) and was a two-time winner at group level at The Curragh after a sixth against older females in the GI Beverly D. S. She was retired following a seventh-place effort in that year's GI Breeders' Cup Filly & Mare Turf and was covered by War Front in early 2013.

Having produced a filly to the Claiborne stallion, she was bred back to the Danzig son and was consigned to the 2015 January Sale by Four Star Sales.

“I saw her walking video and I'd never seen anything like it,” Vandebos said. “Never seen a shoulder like that or a hip or a walk. I said to [Taylor Made's] Frank [Taylor], 'I think this is the one,' and, on one bid, I was able to get her. She's pure class, she's a lovely, lovely mare. She's not large–she's probably only 15.2 to 15.3, but everything she's produced has been pretty good-sized.”

“That's about where we pegged her,” Taylor told the TDN's Brian DiDonato of Up, whose War Front filly was the top-selling short yearling at the same sale when hammering for $800,000 to Solis/Litt on behalf of LNJ Foxwoods. “We looked at some comparable mares–some of those mares by Galileo in foal to War Front were bringing a lot of money, so we thought that was a fair price.”

Up was among the first book of mares to visit Coolmore America's American Pharoah in 2016 and produced a colt by the Triple Crown winner Mar. 31, 2017. The colt they nicknamed 'six-pack' was raised at Taylor Made by Naify and Marshall Taylor, son of Taylor Made President and CEO Duncan Taylor.

“He was pretty spectacular from the day he was born,” Vandebos said. “Very muscular, very intelligent, everything was just in the perfect place. We sold him well.”

Monarch of Egypt, a $750,000 purchase by M. V. Magnier and Peter Brant's White Birch Farm at KEESEP in 2018, became his sire's first winner from that first crop when scoring by 2 3/4 lengths on debut at Naas to earn his 'Rising Star.' Second to the talented future G1 Irish 2000 Guineas hero Siskin (First Defence) in the G2 Railway S. and G1 Keeneland Phoenix S. at two, Monarch of Egypt was a cracking runner-up in a soft-ground renewal of the G3 Jersey S. at Royal Ascot last June. Sold to Hong Kong interests, the bay gelding was a sound fifth, beaten just over four lengths, in the Class 1 Chinese New Year Cup H. (1400m) at Sha Tin Feb. 14 (video) for former leading jockey and now trainer Douglas Whyte.

“I really thought he would be a 2 1/2 to 3-year-old because of what the dam had done at the races,” Vandebos said. “I honestly don't think he's reached his full potential and I am really excited about this race. I don't really think he's a sprinter, but I think it's very interesting that he's in Hong Kong.”

Up was entered for, but was withdrawn from another trip through the Keeneland sales pavilion in November 2017 when carrying to Pioneerof the Nile. That proved a fruitful decision when that produce, a colt, was sold for $1 million at the 2019 September sale. Now named Khartoum, he is a maiden winner in two starts for Aidan O'Brien.

Up's foal of 2019 is a Medaglia d'Oro filly Vandebos proudly describes as “one of the most–if not the most–beautiful filly I've ever owned.” Vandebos elected to take her home after bidding stalled out at $575,000 at KEESEP last fall. The filly, named Star of India, is with Dr. Barry Eisaman in Ocala, but “I am in no rush with her,” Vandebos said.

Next in the pipeline is a now-yearling filly by Quality Road that will most likely be offered at Keeneland this fall, “unless I fall in love with her before then, which is quite likely!”

Up was not bred in 2020 and was recently covered once again by Medaglia d'Oro. And to bring it all full-circle, Up's first foal is now the dam of the 2-year-old colt Direct (Aus) (Siyouni {Fr}), who was third in the G2 Silver Slipper S. at Rosehill in Sydney last month.

Vandebos, who also bred the late Roaring Lion (Kitten's Joy), keeps her 10-strong broodmare band at Lane's End. One of RanJan's most beloved producers, Cambiocorsa (Avenue of Flags), is likely to be pensioned this year to live out her days at Lane's End, Vandebos said.

“I want to keep it small,” she said. “I have a boutique operation that I manage myself. I am back and forth to Kentucky, I spend a week at a time back there about every other month. It's what I love. It's not about the business. It's about breeding the horses and being proud of my mares and their progeny. It's really a labor of love for me. I don't consider it a business, although my accountant tells me I need to start considering it as a business! But I've had good luck. I just hope my horses and mares stay healthy and they can show the world what we can do.”

The field for the BMW Hong Kong Derby will be drawn Thursday at midday (local time).