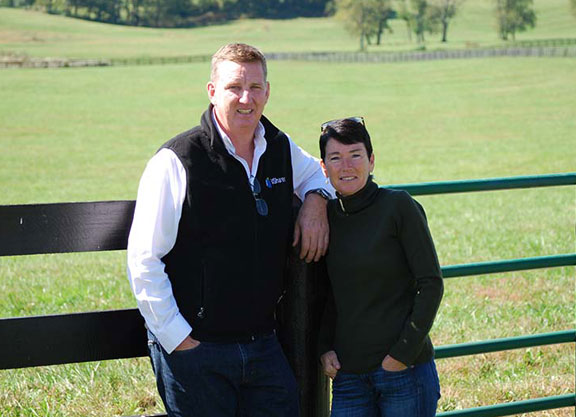 With three days of trade remaining, some 2,259 horses have been reported as sold for gross receipts of better than $368 million, already the fourth-highest turnover in the history of the September sale. At the close of trade Thursday, the average price rested on $163,021, while the median sits at $85,000. When all was said and done, last year's sale–conducted over 12 sessions–grossed nearly $308 million, the highest in nine years, while the cumulative average ($120,487) and median ($57,000) easily eclipsed previous records.

KatieRich bred Thursday's session-topper from the Maryland-bred mare Town Flirt (Speightstown), who was claimed by Larry Doyle for $30,000 out of a victory at Churchill Downs in November 2013 and who went on to post a record of 6-1-1-1 for KatieRich. Hip 3265 is the second foal for her dam, a half-sister to SW Financial Modeling (Street Sense) and SP Qualify (Medaglia d'Oro). The bay's third dam, the Grade II-winning With a Wink (Clever Trick), was responsible for MSW & GSP Jena Jena (Dixieland Band) and the New York-bred stakes winners Win With a Wink (Dixieland Band) and Up Like Thunder (War Chant). Ben Glass, bidding on behalf of his clients Gary and Mary West, had the winning bid.

Four of the eight yearlings sold by KatieRich during the September sale have realized six figures, including a top price of $450,000 for hip 545, a son of Quality Road–Uncontrolled (Unbridled's Song), also purchased by Glass. All told, the KatieRich draft has grossed just shy of $1.5 million.

Hip 3382, a Warrendale Sales-consigned daughter of Cairo Prince, was knocked down to Marc Tacher for $182,000 to reign as the session's top member of the fairer sex. Bred by Mr. & Mrs. Nick Bentley, the February-foaled dark bay is out of the unraced Crozat (Street Sense), whose first foal Perfect Wife (Majesticperfection) won the 2016 Trapeze S. Crozat is a half-sister to the good graded-stakes winning turf sprinter Jungle Prince (Sir Cat). Hip 3382 was making her second trip through the Keeneland sales pavilion, having been bought back on a bid of $65,000 at last year's Keeneland November sale.