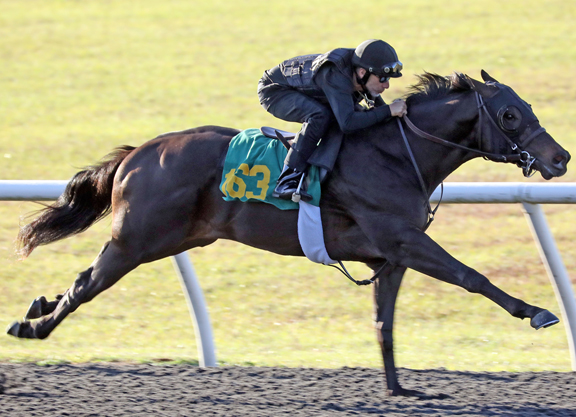 A colt from the first crop of former 'TDN Rising Star' Unified (Candy Ride {Arg}) breezed a quarter-mile in a slick :20 2/5 to post the fastest work at the distance at Thursday's first of three under-tack sessions ahead of next week's OBS March Sale in Ocala.

The February foal is being consigned to the March sale by Ciaran Dunne's Wavertree Stable Inc., agent, and is out of the stakes-winning Promise Me a Cat (D'wildcat). Hip 163 is bred by Gatewood Bell, who paid $35,000 for the colt's dam carrying this foal in utero at Keeneland November in 2018. The dark bay fetched $77,000 when offered as a weanling at Keeneland the following November and was subsequently purchased by Redwings for $190,000 at last year's Keeneland September sale, the joint-second priciest of 62 Unified yearlings reported as sold in 2020. The cross of Candy Ride over Storm Cat-line dams has been a productive one, yielding the likes of Horse of the Year Gun Runner and champion Shared Belief, to name a few.

The under-tack show continues Friday morning at 8 a.m. ET, with hips 189-376 scheduled to breeze. The show may be viewed in real time at the TDN homepage.