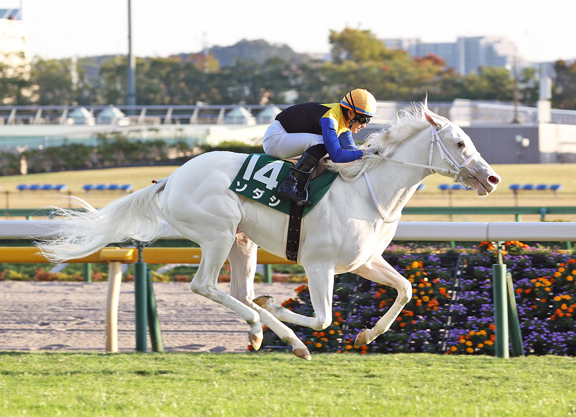 Undefeated Sodashi (Jpn) (Kurofune) will try to extend her winning streak in Sunday's G1 Hanshin Juvenile Fillies and in the process, the likely favorite will also try to become the white-colored horse to win a Group 1 race in Japan.

“The white really stands out on grass,” said trainer Naosuke Sugai. “I think she's turning into a real star.”

The flashy filly triumphed in her career debut at Hakodate in July before scoring over 1,800-meters in the G3 Sapporo Nisai S. Sept. 5. In her latest start, she took the G3 Artemis S. at Tokyo Oct. 31.

“We like to keep her close because she can be sensitive, but physically, she's very solid,” said Sugai.

Sodashi's regular rider, Hayato Yoshida, worked her in the three weeks leading up to Sunday's 1,600-meter test and is encouraged by what he's seen so far.

“She took the bit on her own on the straight,” Yoshida said after last week's fast work. “She was the one leading me. She's been sharp since the week before and I think she'll be in similar form compared to her last race.”

In an interesting fun-fact, Yoshida is the Japanese Racing Association's all-time leader with six wins aboard white horses.

“They're all very sensitive and [can be] high maintenance,” he said of white horses. “You do need to be careful with them but with her, that sensitive side is bringing out the best in her. She breaks well and is super responsive when you tell her to go. She's really smart and a very complete racehorse.”

Also looking for her fourth career victory, Meiki Yell (Jpn) (Mikki Isle {Jpn}), who enters of a victory in the 1,400-meter G3 Fantasy S. at Hanshin Nov. 7. A debut winner at Kokura in August, she followed up with a win in the G3 Kokura Nisai S. Sept. 6.

“The performances have been good in all three wins,” said trainer Hidenori Take. “There was an unstable side to her at one point, but ever since her last start, the appetite is there and she's added some weight. All in all, this is the best I've seen her yet.”

Take is part of Japanese racing's royal family heralded by Yutaka Take–the great jockey and the trainer's parents are cousins. Yutaka, who has ridden Meikei Yell in her last two races, likes what he sees in the filly.

“The most important thing is she won both races. She had a hard time settling, especially in the last race. So that is an area she needs work. Your average horse though wouldn't have won –but she did. Which speaks to a lot about her quality, her upside. She just runs really hard. But as long as she can stay under control then she has every chance. I've known Hide since we were kids, our parents are cousins. Would be great to win a [Group 1] race together.”

Known to be keen in the early going of her races, the filly will be asked to go 200-meters farther than her latest start.

“She has looked good in the workouts,” Hidenori Take added. “We will push her over the weekend and breeze during the week as usual. I hope practice does translate into results. She's physically sound and a good all-round horse. She hasn't filled out yet but I'm excited by the prospect. She's classy and gorgeous–almost like an actress. A win here, hopefully, will really get her name out there.”