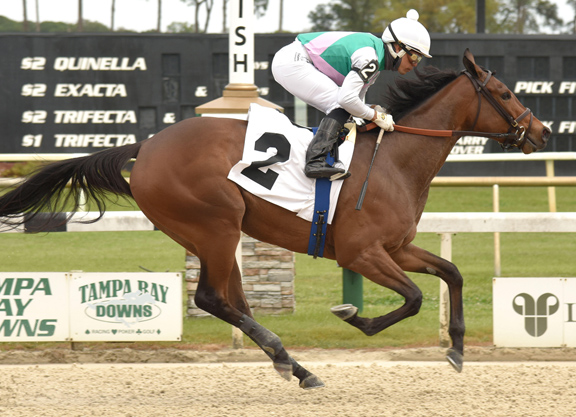 Sent off at debut odds of 19-10 for a purse-enhanced maiden at Tampa, Juddmonte homebred Lory (Uncle Mo–Principal Role, by Empire Maker) overwhelmed her rivals by 7 3/4 lengths to become a new 'TDN Rising Star.'

Clearly last into stride from the two hole, the bay quickly made up for lost time, accelerating all the way up into about fourth position as the field neared the entry to the far turn. Samy Camacho seized upon the opportunity to send Lory through an opening at the inside when pacesetting Summer Home (Outwork) began to get out about three furlongs for home, and Lory assumed control at the quarter pole. With a look over his shoulder, Camacho quickly ascertained that there was nothing that was going to trouble his mount and he geared her down for most of the final furlong, scoring by a margin that could have been into the double digits had she been allowed to extend whatsoever in the final stages.

Lory's dam was a four-time stakes winner and third in the G1 Nassau S. while under the care of Sir Henry Cecil in England and added a pair of graded placings for trainer Bill Mott once repatriated. The filly's second dam Interim (GB) (Sadler's Wells) won the 1995 GII La Prevoyante H. for Bobby Frankel and went on to produce GI Charles Whittingham Memorial S. winner Midships (Mizzen Mast) and GISP Staging Post (Pleasant Colony). Principal Role is the dam of the 2-year-old filly Roll Call (GB) (Into Mischief) and a British-bred yearling colt by Frankel (GB). Lory is bred on the cross over Unbridled responsible for Grade I winners Unbridled Mo and Outwork, and the Juddmonte braintrust went to $650,000 for an Uncle Mo colt out of the Empire Maker mare Lost Empire at Keeneland September in 2019.