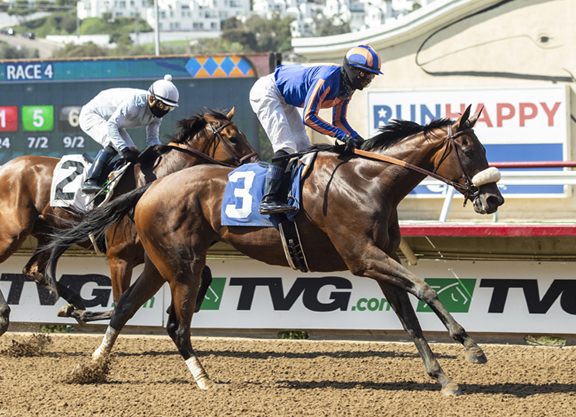 Harvest Moon (Uncle Mo) remained perfect in three starts going long on the dirt and gave her sire yet another new graded winner with a determined success in the GIII Torrey Pines S. on the Pacific Classic undercard.

The betting favorite was beaten for speed and was content to race in the one out and one back position with cover rounding the first turn as Secret Keeper (Into Mischief) led narrowly from Provocation (Into Mischief) to her outside. Mike Smith atop the latter upped the ante through the middle stages, sending Provocation into the lead at the 4 1/2-furlong marker, but Abel Cedillo held his ground at the fence and countered to regain command about an eighth of a mile later. In the meantime, Harvest Moon raced in a stalking third and in the clear and she came to turn up the pressure on Secret Keeper into the stretch. The latter boxed on gamely inside, but Harvest Moon had a bit too much, as she surged to the front a sixteenth of a mile from home and edged clear.

“It was perfect,” said winning rider Flavien Prat. “She was nice and relaxed and I knew they were running very fast up front. She's got speed if you want it, though. Last time I hardly asked her to run. Today, she was just waiting on me. She won it very nicely.”

A veteran of just three previous trips to the post, Harvest Moon was a debut third when well-bet for a one-mile turf maiden at Santa Anita June 12, but graduated by 1 1/2 lengths going two turns at Los Alamitos July 3. She doubled up with a handy 4 1/4-length allowance tally over course and distance July 27.

Harvest Moon is the eighth graded winner and 12th stakes winner this year for Uncle Mo, who is now the sire of 34 GSWs and 61 black-type winners overall. She is bred on the same cross over Storm Cat-line stallions responsible for the likes of GI Kentucky Derby hero Nyquist and additional graded winners Ultra Brat, Auntie Joy and Life's A Parlay.

A half-sister to GSW and 2018 GI Del Mar Oaks third-place getter Californiagoldrush, Harvest Moon is a half-sister to the 2-year-old colt Mr. Impossible (Munnings) and a yearling colt by Air Force Blue. Grade III winner Qaraaba was most recently bred to Mendelssohn.