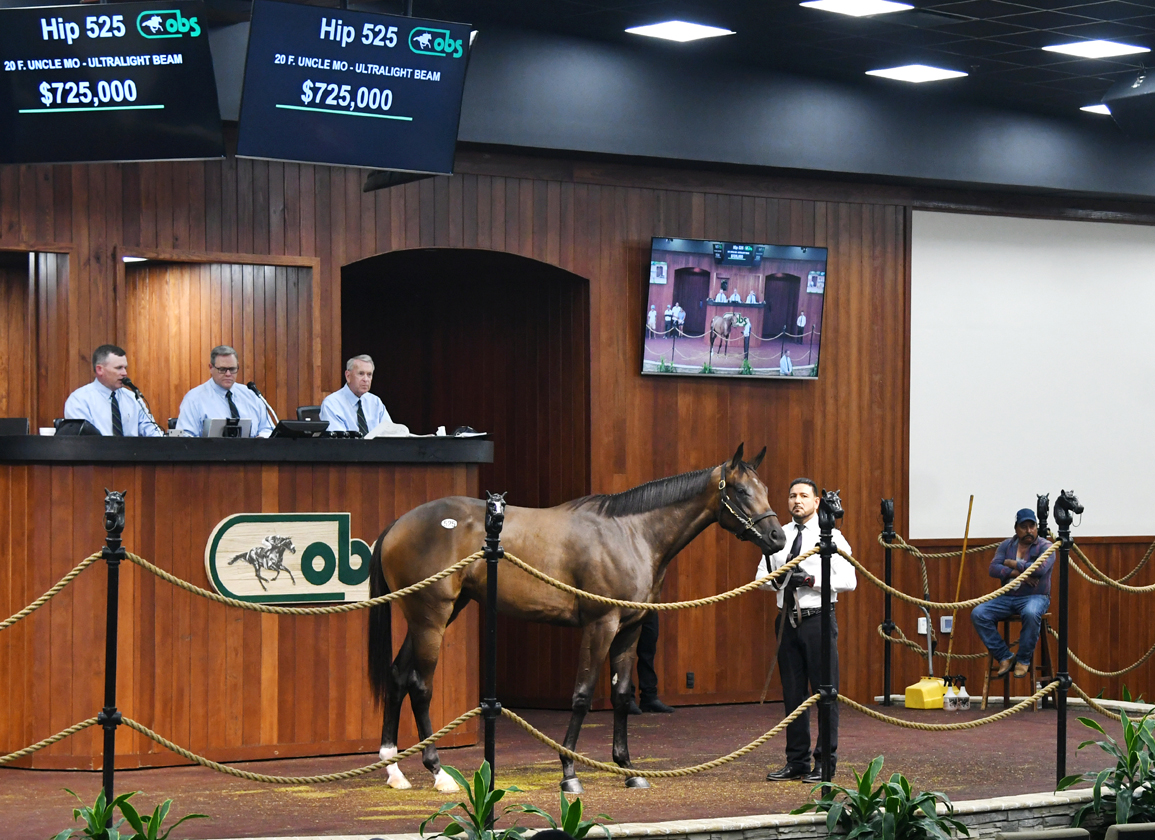 OCALA, FL – After a slow and steady opening session, the action picked up throughout the day at the Ocala Breeders' Sales Company's June 2-Year-Old Sale Wednesday, with the auction's second session concluding with a continuing strong median and an average just off last year's record-setting pace. Wednesday's session produced the sale's top three prices so far, with a filly by Uncle Mo leading the way when selling for $725,000.

With 125 horses reported not sold over the two days, the buy-back rate stood at 22.9% at the close of business Wednesday. A year ago, that figure was 21.8% before falling to 17.5% with the inclusion of post-sale transactions.

Bloodstock agent Donato Lanni, who kept busy throughout the session buying for various clients, made the day's two highest-priced bids. Lanni purchased the filly by Uncle Mo for $725,000 from the Omar Ramirez Bloodstock consignment and acquired a filly by Flatter from Julie Davies for $625,000.

“It was so hard to buy in April,” Lanni said. “Every sale has been tough to buy. We got outbid a lot. We came here prepared to find them and buy them.”

Bryan Rice's Woodside Ranch had a pair of standout pinhooks on the day and the Ocala horseman said there were plenty of buyers for the right horses.

“I think for a good horse, they are finding them and they are paying for them,” Rice said. “We have other horses who don't meet the desired level, so we are going to have to be humble and sell them. You've got to just play your hand.”

The OBS June sale concludes with a final session beginning at 10 a.m. Thursday.

After a trio of high-priced buy-backs, the June sale finally had a breakout horse when bloodstock agent Donato Lanni purchased a filly by Uncle Mo (hip 525) for $725,000 from the consignment of Omar Ramirez Bloodstock Wednesday in Ocala. Lanni had to see off a determined on-line bidder to secure the youngster on behalf of an undisclosed client.

Asked what he liked about the filly, Lanni said, “Did you see her?” Before adding, “She's by Uncle Mo–I love the sire. We've been lucky with the sire. And she was all class. And smart. She's been that way since she's been here.”

The filly, who worked a furlong last week in :10 flat, is out of Ultralight Beam (Giant's Causeway), a half-sister to multiple graded winner His Race to Win (Stormy Atlantic). Her second dam, Fleet of Foot (Gone West), is a half-sister to champion Hello Seattle. She will be trained by Bob Baffert.

“She was a beautiful filly–a beautiful top line and I liked the way she walked,” Ramirez said of the filly's appeal last fall. “It's hard not to like her. She's by Uncle Mo and she has a nice pedigree.”

Ramirez, who partnered up with Solana Beach Sales to purchase the filly, admitted he was surprised to get the youngster last year.

“I never thought I could afford her,” he said. “But I was lucky. I was on a flight when she sold and I had somebody buy her for me. When I got home, I had a message that we had gotten her. We didn't have much money left, but the guy was looking for me and we got her.”

Ramirez, a longtime member of the Top Line Sales team, is consigning under his own name for just the second year this season and celebrated his biggest result Wednesday.

“My family all works with me, we founded the business,” Ramirez said. “So we are all happy and celebrating together. I knew she was going to be big, but I didn't know she'd be that good.”

“This filly was my personal favorite this year and I'm so happy for the team,” Solana Beach's Gary Fenton said. “Omar is a hidden talent no more. And big thanks to Carrie Brogden, as well, for her guidance.”

A filly by Flatter (hip 560) will be joining the Southern California barn of trainer Bob Baffert after selling for $625,000 to the bid of bloodstock agent Donato Lanni. Lanni did not disclose his client for the filly, but later in the afternoon Amr Zedan's Zedan Racing tweeted it had purchased the filly. Consigned by Julie Davies, the gray filly is out of the unraced Wicked Ride (Candy Ride {Arg}), a half-sister to Grade I winner Wickedly Perfect (Congrats). She was one of two juveniles to work the furlong bullet of :9 4/5 during last week's under-tack show.

“She breezed good and came back good,” Lanni said of the filly. “She handled everything well. She went out and did it and came back good. She kept her weight and her mind was really good. It didn't phase her. She'll probably go on and be a good summer horse.”

Of the filly's bullet work, Davies said, “We knew when we were coming in here that she was fast and we just had to hope that all the stars aligned. And we got lucky. She went :9 4/5 when not many horses were doing that.”

A Munnings for Gase

Trainer Keith Desormeaux has been busy buying for Ben Gase this spring and got into the action Wednesday in Ocala, going to $300,000 to acquire a colt by Munnings (hip 544) from Stori Atchison's Dark Star Thoroughbreds consignment on behalf of the new owner.

Desormeaux said he was impressed with the colt's :10 1/5 work during last week's under-tack preview.

“The horse really had some different action,” Desormeaux said. “He had a really high action which I thought would throw a lot of people off, but I loved the way he moved–high knee action, pushed strong off of his hind end. And of course, you couple that with Munnings, who is as hot as they come right now. That's why we had to give what we gave.”

The colt, out of the unraced Voyage (Rahy), is a half-brother to graded winner Great Island (Scat Daddy) and is from the family of Point of Entry and Pine Island. Atchison purchased the chestnut for $50,000 at last year's Keeneland September sale. He RNA'd for $190,000 following a :10 2/5 work at the OBS Spring sale.

Gase, founder and CEO of the shipping tecnhology company R2 Logisticis, had success with his very first horse when Call Me Midnight (Midnight Lute), an $80,000 purchase at last year's OBS March sale, won the GIII Lecomte S. in January.

“Ben Gase was very involved in the April sale,” Desormeaux said. “He had fun with that, so we came back for more. He's getting heavily involved in the business and hopefully I am getting him in on some nice horses.”

When Hannah Smith led hip 655, a son of Ride On Curlin, up to the ring at OBS Wednesday, the 14-year-old admitted to having some nerves. The colt, bred by her father Casey Seaman and the lone horse in the family's Crystal Eclipse Stable consignment, rewarded her hard work when selling for $230,000 to Big Sky Racing.

“We knew he was a really great colt and we knew he was going to be big right from the start,” Smith said of the colt who worked a flashy furlong in :10 flat last week. “He was a homebred and when we were breaking him, he just did everything right–everything above and beyond. So we were expecting this result.”

That didn't mean that the experience was without some nervous moments.

“I had to walk him up there,” Smith said. “And that was the scariest part. I was very nervous. That was my first time showing and walking a horse in the sale. It was very nerve-wracking. But it went perfectly.”

Seaman has been breeding racehorses in Florida since the 1990s and counts 2003 GI King's Bishop S. winner Valid Video among his graduates. So, getting into the business was a natural fit for his daughter.

“I've done this ever since I was little,” Smith said. “I was on a horse before I could walk. I love doing it.”

After a hiatus from breeding, Seaman is getting back into the business. The farm currently has three broodmares, including hip 655's dam Awesome Sunrize (Awesome Again).

Smith continued, “We kind of veered away [from breeding] a little. Everything hit, the pandemic and life happens, but this is a nice turn of events.”

Asked if breeding and racing would be in her future, Smith said, “I have no clue yet. But I hope so.”

Bryan and Holley Rice's Woodside Ranch hit a pinhooking home run when selling a filly by Hit it a Bomb (hip 541) for $200,000 Wednesday at OBS. The Rices had purchased the bay for $8,000 at last year's Fasig-Tipton February sale.

“Her physical,” Bryan Rice said when asked about the filly's appeal last February. “She had great muscle and a great mind and a beautiful walk. And that has stayed with her.”

Of the bargain purchase, Rice said, “I think the pedigree was a little cold at the time. And it was just one of those sales where she was there and I was seeing her in a long coat and pretty young. I felt like I saw things I liked and we did right by her and she's done right by us.”

Donato Lanni signed the ticket on the filly Wednesday on behalf of Sarah Kelly.

“I am thrilled,” Rice said of the result. “I know that she is going to go on and continue to do right by everybody. She is really special. She is legitimate.”

Woodside enjoyed another pinhooking success just a few hips later when selling a filly by Runhappy (hip 587) for $130,000 to Franklin Ave. Equine and bloodstock agent Nick Hines. The dark bay had been purchased for $10,000 at last year's Fasig-Tipton February sale.