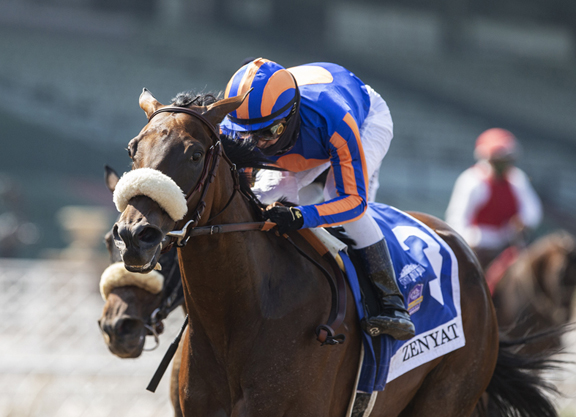 Alice Bamford and Michael Tabor's Harvest Moon (Uncle Mo), the only 3-year-old in the four-horse field, put away favored Fighting Mad (New Year's Day) at midstretch and then held off Hard Not To Love (Hard Spun) in the dying strides to win the GII Zenyatta S. at Santa Anita Sunday and earn an automatic berth in the GI Breeders' Cup Distaff.

“I'm absolutely thrilled today, completely over the moon for Harvest Moon,” said Bamford. “She's a homebred and she's just so deep in my heart and in my family's heart. It was so good to see her so well ridden today, showing off her beautiful stride. We lost her mother this year, Qaraaba, who was a stunning, stunning filly and each time I tell her, 'Harvest Moon, go and do it for your Mama.' And she has.”

Sent off at 7-2 and making her first start beyond a mile, the lightly raced Harvest Moon tracked pacesetting Fighting Mad through fractions of :23.37 and :46.51. She rolled up to engage the favorite entering the homestretch and, while Fighting Mad attempted to claw her way back, Harvest Moon was always going the better of the two and inched away to the wire for her fourth straight victory. Hard Not To Love closed for second, while Fighting Mad, who was coming off a wire-to-wire victory in the GI Clement L. Hirsch S., stayed on for third.

“We thought Fighting Mad would go to the lead and we wanted to keep pressure on her,” said winning jockey Flavien Prat. “My filly had never been a mile and a sixteenth, but Fighting Mad was carrying 126 pounds. You never know with a 3-year-old against older, but we got eight pounds, so that was good. It turned out this was a good distance for my filly and she really ran well.”

Harvest Moon was making just her fifth career start in the Zenyatta. The bay filly opened her career over the turf, finishing third in a one-mile maiden special weight at Santa Anita June 12. She graduated second time out when moved to the main track at Los Alamitos July 3 and added an optional claimer at the oceanside oval July 27 before making the jump to the graded stakes ranks with a 1 1/4-length victory in the Aug. 22 GIII Torrey Pines S. last time out.

“We have been really patient with her early on and that's a credit to Alice and Michael Tabor,” said winning trainer Simon Callaghan. “It was said that this filly has a lot of talent and they were so patient throughout the whole process. She took her time to come to hand, but she's come a long way in a short period of time.”

Harvest Moon's sire Uncle Mo doubled up on graded victories just 20 minutes after the Zenyatta when Envoutante glided to victory in the GIII Remington Oaks.