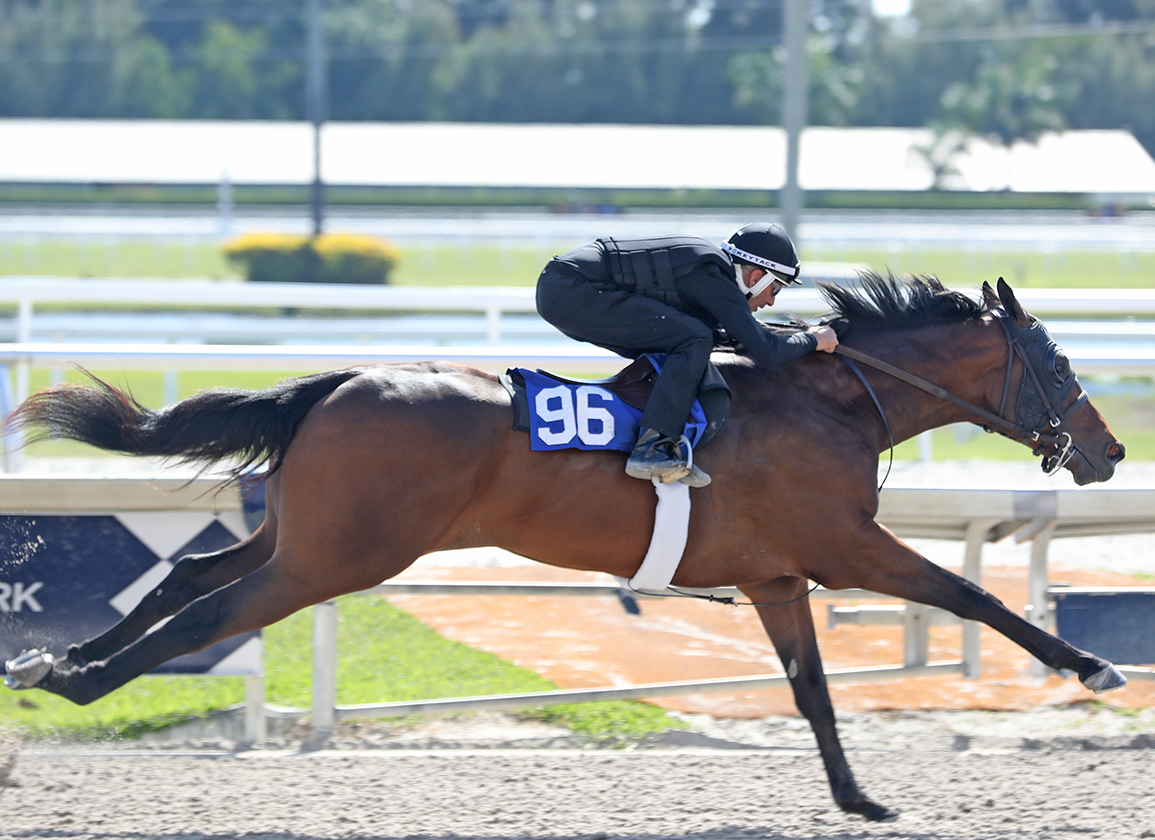 HALLANDALE BEACH, FL – The under-tack show for the Fasig-Tipton Gulfstream Sale of Selected 2-Year-Olds in Training was held under picture-perfect blue skies and temperatures in the 70s Monday in South Florida.

“I thought the under-tack show went exceptionally well,” Fasig-Tipton President Boyd Browning said at the conclusion of Monday's fourth and final set of works. “The conditions were very consistent for all the horses, from start to finish. There were some very impressive works, both visually and time-wise. It looked like the horses were moving very well over the racetrack.”

A colt by Uncle Mo (hip 96) turned in the day's fastest furlong work–and fastest ever in the seven-year history of the Gulfstream auction–when covering the distance in :9 3/5. The juvenile is out of Brusquer (Elusive Quality), who is a half-sister to Tapit, and is consigned by Ciaran Dunne's Wavertree Stables.

“We knew the horse was going to go really well,” Dunne said of the work. “All of the stars had to align for him to go really good and hit the wire just right. But if ever a horse had a chance to do it, it was probably going to be him. He is a big, beautiful horse and he's advertised himself as a pretty special horse all year.”

Hip 96 was bred by Barouche Stud and was purchased privately by Dunne after he RNA'd for $385,000 at last year's Keeneland September sale.

“We liked everything about him,” Dunne said of the yearling's appeal. “He is a stunning horse physically. He is not the most effusive of walkers, which is why we own him. With his pedigree and the way he stands up, if he was a big, long-walking horse, we wouldn't have gotten near him. When people buy in September, they have 30 seconds to make their minds up and they are looking for reasons for no. Whereas, in Book 1, we look for reasons for yes. We make an excuse here or there and he had enough pluses to outweigh the one negative, which was his walk. He still can't walk. But luckily enough, today they didn't time him walking up there.”

Wavertree had a powerful showing at last year's Gulfstream sale, selling two of the three million-dollar offerings, including the $2.6-million topper.

“We had a really good sale last year,” Dunne said with a smile. “I think it's a really good group this year. When you have a really large number like we have, there are always going to be disappointments on breeze day. But overall, we were happy. There were one or two we thought might have gone a jump quicker than they did, but they are big, two-turn horses who are bred to go long. That's what people are coming here for. They want big, two-turn horses. The Uncle Mo is that kind of horse and he still went that fast, but for the most part, two-turn horses don't have that kind of speed. I think here they see through that a little bit. So for me, that's the beauty of being here.”

A pair of juveniles shared Monday's second-fastest furlong time of :9 4/5. First to hit that mark was a colt by City of Light (hip 100) consigned by Top Line Sales (video) and the time was matched just minutes later by a colt by Nyquist (hip 62) from the Classic Bloodstock consignment (video).

Eight juveniles worked a quarter-mile Monday, with all but one of them coming from Tom McCrocklin's consignment. A filly from the first crop of Bolt d'Oro (hip 48) was just the second to work Monday and earned the day's bullet when working in :20 2/5. The juvenile, out of Rich Love (Not For Love), is consigned by McCrocklin on behalf of Solana Beach Sales.

McCrocklin purchased the filly on behalf of Solana Beach for $85,000 at last year's Keeneland September sale, but she was a horse that the operation was well aware of beforehand. The pinhooking division of Little Red Feather purchased Rich Love, with the Bolt d'Oro filly in utero, for $70,000 at the 2020 Keeneland January sale and, as part of a foal share agreement, sold her as a weanling for $80,000 at that year's Keeneland November sale.

“We did a broodmare pinhooking partnership,” explained Solana Beach's Billy Koch. “And [Rich Love] was part of that group. It was funny because I remember being at the yearling sale and Tom said, 'I really like this filly.' I said, 'I think that's the filly we sold.' And he said, 'Yeah. And we're going to buy her back.'”

Koch continued, “Tom really gets all the credit and he's been high on her right from the start.”

Of the filly's bullet breeze, which was another fastest-ever time for the Gulfstream sale, Koch added, “Truthfully, Tom has been so high on her that we had such high expectations and she even exceeded those. He has been saying that she is a very special filly. Every time she breezes, we get a text, 'This is real serious.' So expectations were high, so it was not a surprise, but it was a surprise just how awesome it was.”

Bolt d'Oro got off to a huge start at the 2-year-old sales with the OBS March sale two weeks ago where his offerings were led by a $900,000 colt.

“Bolt d'Oro was really popular and sold well,” Koch said. “His horses are good–he's stamping them and they are fast and athletic and strong. They have all the attributes you want in a good racehorse. This filly, you can look at her now and it doesn't even look like she did anything. And she has a great mind.”

Hip 48 will be the only Gulfstream offering from Solana Beach, but Koch may be active on the other side of the leger.

“We came down here to sell and maybe do a little buying,” he said. “We are going to enjoy the next couple of days and hopefully the right people will be around and she'll get it done. It's all her and Tom. We're just along for the ride.”

The juvenile sales season opened with a competitive market at the OBS March sale and expectations are for those results to continue at Gulfstream Wednesday.

“I think it will be a very strong market,” Browning said. “But every 2-year-old sale that I've ever attended has been selective where you have to get through several of the hurdles. They have to have a solid enough work in terms of time, they have to have the video and they have to get through the X-ray process. Overall, I think there is a lot of interest and a lot of enthusiasm for quality horses. There was very good attendance here today amongst the buying bench. So I think it will be a very, very solid and competitive sale, particularly for what are perceived to be the quality offerings. For those horses that miss, it will be tough for them to bring the prices that the consignors are going to be happy with to let them go at this point because they still have options.”

Dunne agreed demand would be high for the right offerings.

“I think that on a dirt surface that they have some history on, I think the buyers can sort out the wheat from the chaff,” Dunne said. “And I think if you have a good horse here, you're going to  be rewarded. And if you just miss, it will be no different than any other year. You'll miss by a lot.”

From a catalogue of just 103 juveniles, 32 horses were already withdrawn from the auction Monday evening. Several high-profile consignors are missing from the slimmed down catalogue, leading Dunne to quip, “I guess they just didn't have anything good enough to come here with.”

Asked about the long-term viability of the Gulfstream sale, Browning said, “Right now our focus is to do the very best job we can for the men and women who are here with horses in the sale. Our goal is to have the best 2-year-old sale we've ever had on Wednesday. And we are going to do everything in our power to make that happen. That's our focus. You adjust and evaluate your sales plans every year, but right now our focus is on the exceptional horses that we have on the sales grounds here.”

After a day of showing Tuesday, the Fasig-Tipton Gulfstream sale will be held Wednesday in the track's paddock with bidding scheduled to begin at 2 p.m.