Home » Archive » Top News » Uncle Mo Colt Puts It All Together; Becomes Second Rising Star of the Day at Gulfstream

Uncle Mo Colt Puts It All Together; Becomes Second Rising Star of the Day at Gulfstream 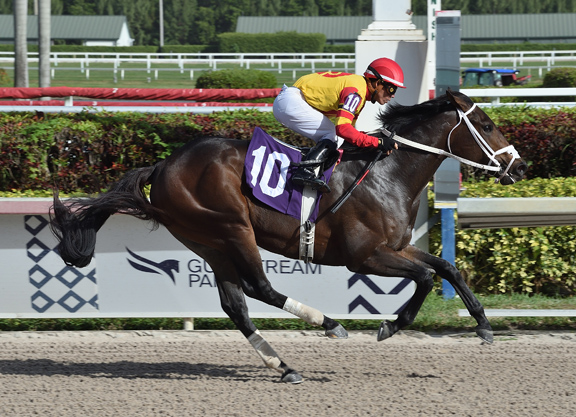 Global Thoroughbred and Top Racing LLC's Caracaro (Uncle Mo) flashed signs of talent when a front-running, but green, second going seven furlongs at Gulfstream Dec. 8. He put it all together Saturday, however, stalking and pouncing his way to a six-length tally that earned him the day's second 'TDN Rising Star' nod. Bet down late and off as the 2-1 chalk, the $95,000 KEENOV weanling broke well and was reined in to press a longshot from out in the clear through a :23.70 opening split. He kept after that rival through a quick second quarter of :22.33 (:46.03 half), and started to inch clear approaching the stretch. Spa City (Street Sense) and Don Bourbon (Tiznow) worked hard to try and chip away at the leader's advantage in the lane, but he was not for catching as he bounded away powerfully. Spa City, a son of MGSW Sara Louise (Malibu Moon), edged away from Don Bourbon late.

Caracaro's final time of 1:35.16 for a mile compared very favorably to the 1:36.92 earned by Kingmeister (Bodemeister) when winning the other division of this race as the third.

The winner is the first foal out of Peace Time (War Front), a daughter of GSW and MGISP Santa Catarina (Unbridled). A $600,000 yearling, Peace Time was third at short odds in her lone start over the Gulfstream turf course for Chad Brown and the Coolmore contingent, and later brought $260,000 while carrying Caracaro at the 2016 Keeneland November sale. Dam Peace Time (War Front) was subsequently sent to Australia, where she produced an Extreme Choice (Aus) filly in 2018 and a Hellbent (Aus) filly in 2019.