Uncle Mo Colt Graduates in Style at the Spa 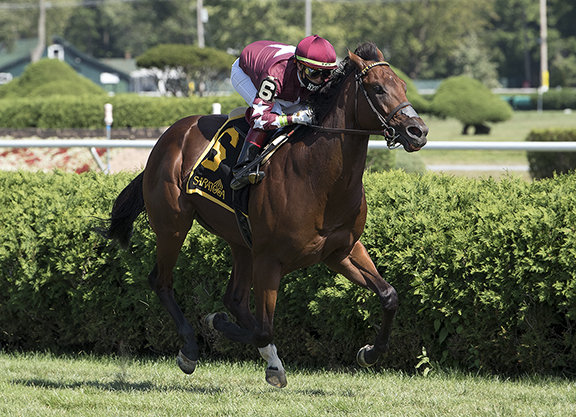 Golden Pal, still diploma-less despite two runner-up finishes and plenty of hype, put it all together Friday in Saratoga's Skidmore S. A close second at 1-2 odds on the Gulfstream main track Apr. 17, the son of turf sprinting phenom Lady Shipman was just tagged late after showing the way in Royal Ascot's

G2 Norfolk S. June 19. He and stablemate Fauci (Malibu Moon) appeared to have this compact field at their mercy, and the public got it right in installing Golden Pal as the 2-5 chalk. Blasting out of his outside stall to immediately clear off, the Randall Lowe homebred doled out splits of :21.99 and :44.37 with Fauci in closest pursuit. The race already appeared won as they straightened for home, and Irad Ortiz, Jr. just gave Golden Pal a couple of shoulder taps as he cruised home well clear of Fauci while stopping the timer in a sharp 1:00.88.

“He's something special, this guy. I think we just got a little peek at it,” trainer Wesley Ward said of the winner. “From everything we've seen here, they're coming into his home court like Michael Jordan in the United Center in the Breeders' Cup this year. He's a very, very nice colt. I'm very thankful for the owner [Randy Lowe]. He's afforded me the time that myself and my team has needed, and this horse had some issues and my team has really worked hard on this guy. He's so fast and he's so gifted. To get him to this point is special.”

Ward indicated that Golden Pal would most likely train up to the GII Breeders' Cup Juvenile Turf Sprint, to be held at Keeneland Nov. 6.

Golden Pal is the first foal to race out of brilliant 13-time winner Lady Shipman (Midshipman), who missed by a neck in the 2015 GI Breeders' Cup Turf Sprint. Lady Shipman has not produced a live foal since Golden Pal and was bred back to Omaha Beach for 2021. For more on Golden Pal and owner/breeder Randy Lowe, see Second Chances.