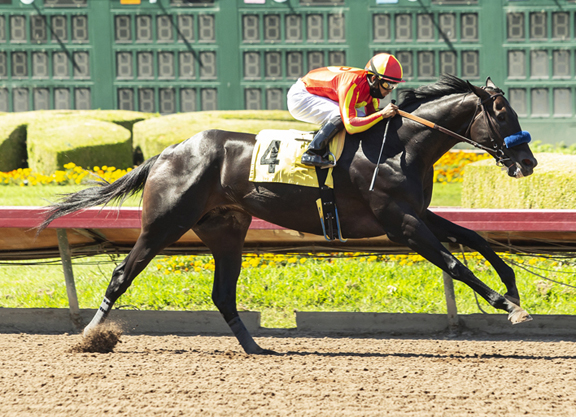 The flashy Uncle Chuck went from maiden winner to graded winner as he ran away from just three foes as the heavy favorite here. A seven-length romper going a flat mile at Santa Anita June 12, the half-brother to brilliant debut winner and sire Maclean's Music (Distorted Humor) was bet down to 13-1 in last week's GI Kentucky Derby future pool and gave his backers reason to feel good about their chances Saturday. With stablemate and MGSW Thousand Words the main danger on paper, the leggy dark bay chased the pace while kept very far off the rail. Thousand Words sat even farther back and more off the inside. Uncle Chuck made a quick move to challenge for the lead around the bend, and while Thousand Words looked like he might be going better heading into the long Los Al stretch, Uncle Chuck found plenty more despite some lead issues to bound away.

“He broke great and I just left him alone,” said rider Luis Saez, who flew in from New York to take the mount. “He was doing it easy all the way. When I showed him the whip he took off. He's a very nice colt.”

While Hall of Fame trainer Bob Baffert has lost two of his sophomore stars this year on the elongated GI Kentucky Derby trail, he has displayed the depth of his bench this week, first with $3.65-million Cezanne (Curlin) going two-for-two on Thursday followed by the exacta in the Los Alamitos Derby.

“That was good,” Baffert said. “At the top of the lane, I thought Thousand Words might get him, but at least he ran better. We're just learning more about Uncle Chuck. He's still pretty green, but he's got gears. Luis was excited about him and I think he's one of the top riders in the country. He said [Uncle Chuck] is still learning and he's got a lot of improvement in him. He was full of himself when he came back. It's exciting. He's learning quickly and he has brilliance. I was impressed. I think we just saw something pretty special and he's been special from day one. He's bred to be any kind.”

An 8 1/2-length first-out scorer (105 Beyer Speed Figure) herself, Uncle Chuck's dam Forest Music is responsible for four debut winners, including the fastest of all time in Steve Asmussen trainee Maclean's Music, who earned a 114 Beyer for his lone appearance Mar. 19, 2011 at Santa Anita. Forest Music was purchased privately by Stonestreet before taking the 2005 GII Honorable Miss H. at Saratoga. Despite her speed, Forest Music has produced several horses who have seen out a route of ground, including Stonestreet's 2019 GIII Doubledogdare S. winner Electric Forest (Curlin) and 2015 GII Los Alamitos Derby third Kentuckian (Tiznow). Forest Music produced a Curlin colt in 2019 but was barren when bred back to that stallion for 2020. Uncle Chuck is the 32nd graded winner for Uncle Mo but first out of a mare by top broodmare sire Unbridled's Song. GI Apple Blossom H. winner Unbridled Mo is out of an Unbridled mare, and GI Wood Memorial S. hero Outwork is out of a mare by Unbridled's son Empire Maker.