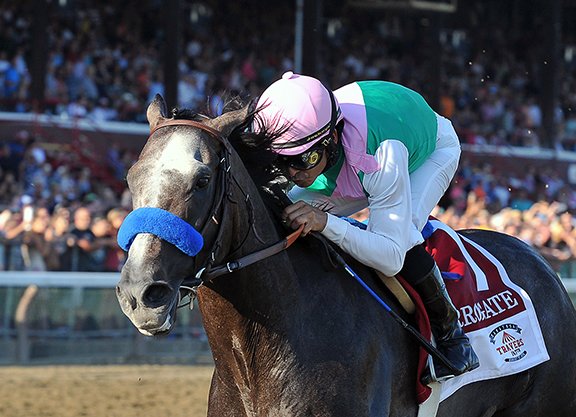 Arrogate: to take or claim something without justification.

After crushing General Assembly's 37-year-old 1 1/4-mile track record at Saratoga while setting scorching early fractions in a GI Travers S. performance for the ages, it's pretty safe to say that even the most over-the-top praise of 'TDN Rising Star' Arrogate (Unbridled's Song)'s 13 1/2-length win in his stakes debut would be quite justified.

“What he did today is pretty incredible,” Bob Baffert said of the Juddmonte colorbearer's tour de force. “He looks like a superstar in the making. So I think the fans will remember watching a horse like this because I know when I see performances like this, it's very rare.”

It was an emotional win for the Hall of Fame conditioner, securing his first Travers since Horse of the Year Point Given in 2001, fresh off the heels of last year's Triple Crown hero American Pharoah (Pioneerof the Nile) getting upset in the Mid-Summer Derby. Baffert also trains the runner-up in Saturday's renewal, American Freedom (Pulpit).

“Last year you probably could have poured me out of a shot glass,” Baffert admitted. “We were pretty dejected. I felt bad for the horse. The horse got beat, but he ran his heart out. The whole town came out to see him do something like Arrogate did today. We were all looking for that turn for home, cheer up, great end of a movie theme, but I'm just glad to be back here with another chance at it.”

“Prince Khalid has been in major international racing for 40 years, and he's had some of the best horses in the world,” said Dr. John Chandler, President of Juddmonte Farms USA. “And he has always had implicit trust in his trainers. He's never told a trainer what to do, where to run a horse, or when not to run a horse. So, after Bobby [Frankel] died, we didn't have any horses in California, and he said he'd like to have some there. Obviously, he chose Bob. Our breeding program doesn't quite produce the sort of horses that Bob trained, and he said, 'Well, buy some horses then.'”

Arrogate, a debut third as the 1-2 favorite after a slow start going six furlongs at Los Alamitos Apr. 17, has been unstoppable since shedding blinkers and stretching to two turns. The $560,000 KEESEP yearling purchase earned the 'Rising Star' distinction with a powerful maiden win going 1 1/16 miles at Santa Anita June 5, then added a pair of easy optional claiming tallies while facing four rivals in Arcadia June 24 and only two others at Del Mar Aug. 4.

It was unclear which of the two Baffert pupils would lead early in the Travers, but Arrogate, drawn on the rail beneath Mike Smith, seized command into the first turn with stablemate American Freedom in closest pursuit. The fractions were more than honest–:23.23 and :46.84 and six furlongs in 1:10.85–but Arrogate seemed to be getting stronger as the race went on. Arrogate began to open up turning for home and from there, it was only a question of by how much. And how fast. Arrogate's final time of 1:59.36 shattered the track record of 2:00 flat established by General Assembly in a sloppy renewal of the 1979 Travers. The 13 1/2-length margin is the third-largest in Travers history behind Damascus's 22-length romp in 1967.

“I rode his father–he looks so much like his father,” Smith said. “He was an unbelievably talented horse and his son might be even more talented. It's crazy. He just did a mile and a quarter and as you can see galloping out, I had trouble getting him to stop. We headed for home and he picked it up when I asked him. I was amazed how he lengthened his stride the last sixteenth of a mile and opened up.”

As for what's next, Baffert added, “I really didn't have a plan. This was the plan, today. So I'll just get him back, and then we'll see how much this race took out of him. That was a pretty big jump that he made today. I'm sure that all his Beyers and sheet numbers are going to be off the chart. There's no rush. I think that he's the kind of horse that, after what he did today, he could go into the Breeders' Cup fresh like Pharaoh did. I don't think that's a big problem for him. I think that, what he did today, he deserves a little break.”

The late Eamon Cleary purchased Arrogate's dam Bubbler (Distorted Humor) for $170,000 as a 4-year-old at the 2010 Fasig-Tipton Kentucky November sale. The mare was multiple stakes placed on the track and was third in the 2010 GIII Ouija Board Distaff H. Arrogate's half-sister by Medaglia d'Oro is catalogued as hip 226 at the upcoming Keeneland September sale. Bubbler produced a filly by Giant's Causeway this year and was bred back to Into Mischief. Arrogate's third dam is champion 2-year-old filly Meadow Star (Meadowlake) and this is also the family of MGISW Belle Gallantey (After Market). Arrogate is the 22nd Grade I winner for the late Unbridled's Song, according to TDN Sire Stats.