Unbridled's Song Filly Duels and Draws off Under Twin Spires 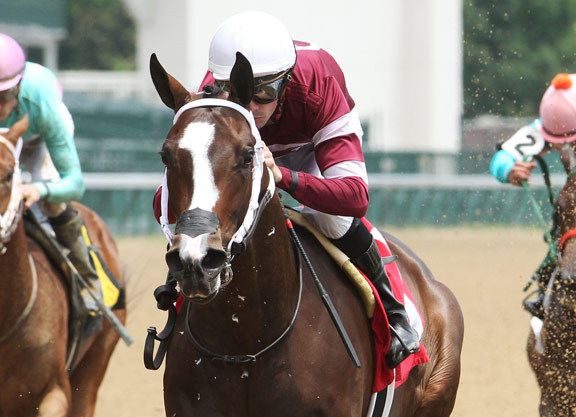 2nd-CD, $45,348, Msw, 6-3, 2yo, f, 5f, :58.19, ft.
+TRICKY ONE (f, 2, Unbridled's Song–Simplify {SW & GSP, $261,658}, by Pulpit), 7-5 for a barn whose juvenile firsters are always dangerous at this meet, broke alertly from her rail draw to duel with second timer Ivy's College Fund (Albertus Maximus) while the rest of the field raced well back and hoped to pick up the pieces. Tricky One took a clear advantage from her more experienced, but greener rival in midstretch after splits of :22.29 and :45.59, and always had plenty in reserve from that point forward to defeat odds-on Casse representative Sanity (City Zip) by 4 1/2 lengths. Ivy's College Fund held on for third. The winner's dam was a debut victoress for these connections at this meet in 2008 before finishing a close third–a head behind future Hall of Famer Rachel Alexandra (Medaglia d'Oro)–in the GIII Debutante S. here that June. Her year-older half-sister Simple Surprise (Cowboy Cal), SW, $112,372, also annexed her debut under the Twin Spires last June before adding a grassy Saratoga stakes event two months later. A daughter of MSW and MGSP Classic Olympio (Olympio) and half to MSW Classify (Unbridled's Song) and GSP Seeker (Hard Spun), Simplify has a yearling filly by English Channel. Lifetime Record: 1-1-0-0, $27,900. Click for the Equibase.com chart or VIDEO, sponsored by Fasig-Tipton.
O/B-Winchell Thoroughbreds LLC (KY); T-Steven M. Asmussen.