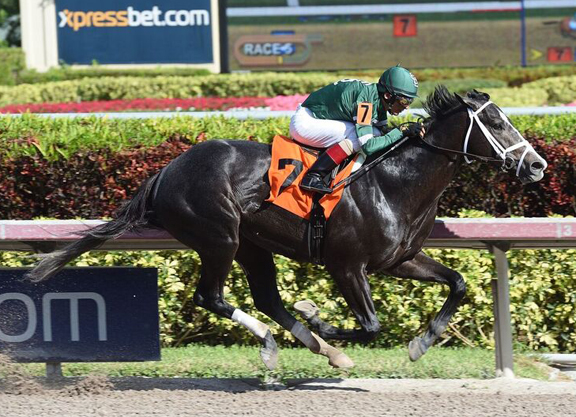 5th-GP, $36,000, Msw, 12-31, 2yo, 7f, 1:22.82, ft.
BATTALION RUNNER, c, 2, by Unbridled's Song
1st Dam: Tamboz, by Tapit
2nd Dam: Winning Call, by Deputy Minister
3rd Dam: Call Now, by Wild Again
Battalion Runner endured an eventful trip on his June 3 debut, being forced to steady in the wake of future GIII Sanford S. bridesmaid Random Walk (Super Saver) before closing to be runner-up sprinting at Belmont. Hammered down to 1-5 favoritism in this second go, the $700,000 KEESEP yearling delivered the goods en route to 'TDN Rising Stardom' at Gulfstream Park Saturday. He jumped straight to the head of affairs from stall seven and sidled over to race one off the fence through a first quarter in :23.09. Only under token pressure from there, the Pletcher charge was on cruise control through a :46.20 half-mile and kicked away to a facile victory in the lane without ever being asked a serious question. It was 8 3/4 lengths back to Lookin for Eight (Lookin At Lucky). Out of a full-sister to GI Breeders' Cup Dirt Mile hero Tapizar, Battalion Runner is a half-brother to Oceanwave (Harlan's Holiday), MGSP, $245,449. Knocked down for $440,000 in foal to dual GI Breeders' Cup Classic hero Tiznow at the KEENOV sale on the bid of Dell Ridge in 2012, Tamboz's Tiznow colt, named Tiznoble, has gone on to win three times in four starts. She has since produced a yearling colt by Into Mischief, a weanling colt by Distorted Humor and she visited Medaglia d'Oro this spring. The winner's third dam is GSW and GI Oak Leaf S. runner-up Call Now (Wild Again). This is also the extended family of GISWs Olympio (Naskra) and Cuvee (Carson City). Lifetime Record: 2-1-1-0, $36,600. Click for the Equibase.com chart, or the free Equineline.com catalogue-style pedigree. VIDEO, sponsored by Fasig-Tipton.
O-St. Elias Stable; B-Dell Ridge Farm, LLC (KY); T-Todd A. Pletcher.