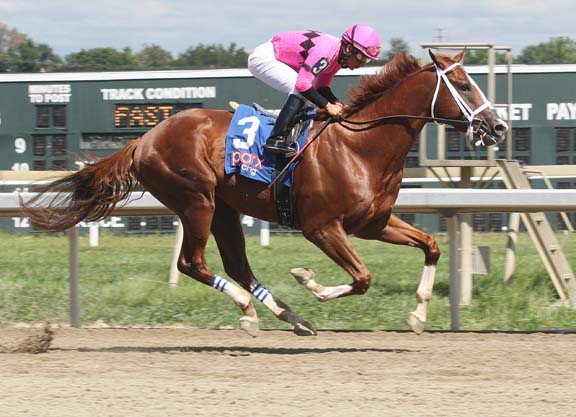 Asked if he expected such a dominating performance from the $260,000 KEESEP yearling, the Wests racing manager Ben Glass laughed and said, “Not really–we thought he would have to run long. We didn't expect him to excel that much going short, but we were sure tickled pink after the race. Paco just sitting on him like that–it was just amazing. It was effortless. It was a very fun race to watch.”

Of the decision to get the big colt started over six furlongs, Glass explained, “He needed a start and Jason [Servis] thought he would run very well. Obviously we didn't know he'd run that well, but he thought he'd run good so we said, 'Yeah, go ahead and put him in.' Obviously, he's made to be a two-turn horse, but he looked good going short today. I'm not complaining.”

“He had a very small chip removed by Dr. Bramlage last September,” Glass said. “We gave him a lot of time and sent him to Jeff Kirk in Florida and he got him back and then we sent him to Jason and it looks like they did their jobs–they did a great job.”

Glass said Hot Seat's next start would be up to Servis.

“He's a Maryland-bred, but I don't know if there is anything in Maryland for him,” Glass said of the colt. “It would be nice if there would be, but he's obviously not by a Maryland sire. Jason will give him time to catch his breathe and then he'll try to spot him accordingly.”