Unbeaten Tobys Heart to Stretch Out Versus Graded Company in Return 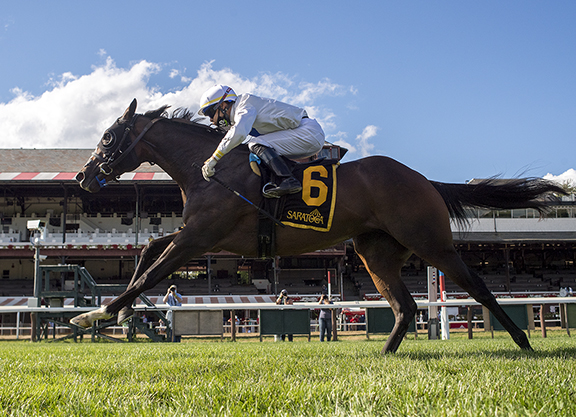 Unbeaten 'TDN Rising Star' Tobys Heart (Jack Milton) is aiming for a return to action in either the GIII Herecomesthebride S. at Gulfstream Park Feb. 27 or the GIII Florida Oaks at Tampa Bay Downs Mar. 6. Both races are contested on grass at 1 1/16 miles.

Co-owned by Terry Hamilton and trainer Brian Lynch, the 3-year-old filly was impressive in a pair of efforts sprinting on the lawn last term.

After kicking off her career with a 'Rising Star' performance beneath the Twin Spires June 4–following a slow start, she unleashed an explosive run to graduate by 6 3/4 lengths–Tobys Heart followed up with a good-looking, come-from-behind score in a loaded renewal of Saratoga's Bolton Landing S. most recently Aug. 19 (video).

“She had two tiny chips removed from the front of her P1 on both ankles,” Lynch said. “We cleaned them up and gave her a little bit of time and I think it's been a blessing. She seems like she's blossomed–bigger, stronger filly. It gives you something to look forward to.”

Tobys Heart has posted eight workouts at Lynch's Palm Meadows base since mid-December, including a five-furlong spin in 1:03.45 (12/26) on grass Friday.

“She hasn't missed a beat since we put her back into training,” Lynch said. “We're looking to stretch her out and look forward to seeing what she shows us when we try her around two turns. She's doing everything right, so fingers crossed.”

Tobys Heart, a $5,500 Fasig-Tipton Kentucky Fall yearling, brought $45,000 from Alistair Roden Bloodstock on behalf of Hamilton and Lynch after breezing an eighth in :10 1/5 at OBS March.

Bred in Kentucky by Trackside Farms, Tobys Heart is from the second crop of young Crestwood Farm stallion Jack Milton. She is out of the stakes-winning Lil's Lad mare Pick of the Pack, a half-sister to GSW Great Attack (Greatness).