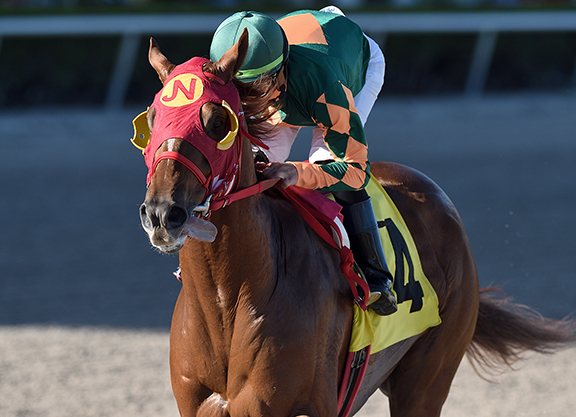 Premier Star (c, 3, Tapiture-Letthetigerparty, by Hold That Tiger) drifted some down the lane, but ran on nicely to handle next out ‘TDN Rising Star’ Caracaro (Uncle Mo) going seven furlongs on debut at Gulfstream Dec. 8. The chestnut followed suit and earned a ‘Rising Star’ badge of his own by making it a perfect two-for-two in a first-level optional claimer in Hallandale Wednesday.

Facing only five rivals, the 1-5 favorite quickly established control and was unchallenged while on the engine through fractions of :22.49 and :45.00. He let it out a notch around the far turn and cornered for home in complete command. Jockey Irad Ortiz, Jr. gave him a couple of reminders down the lane and Premier Star stayed to task, cruising under the line a 5 1/4-length winner over Americanus (War Front).

Premier Star, a $105,000 KEESEP graduate, brought $100,000 after breezing a quarter in :21 at the OBS June Sale. He hails from the extended female family of MGISW Harlan’s Holiday. Premier Star is the most recent produce from his five-time winning dam.