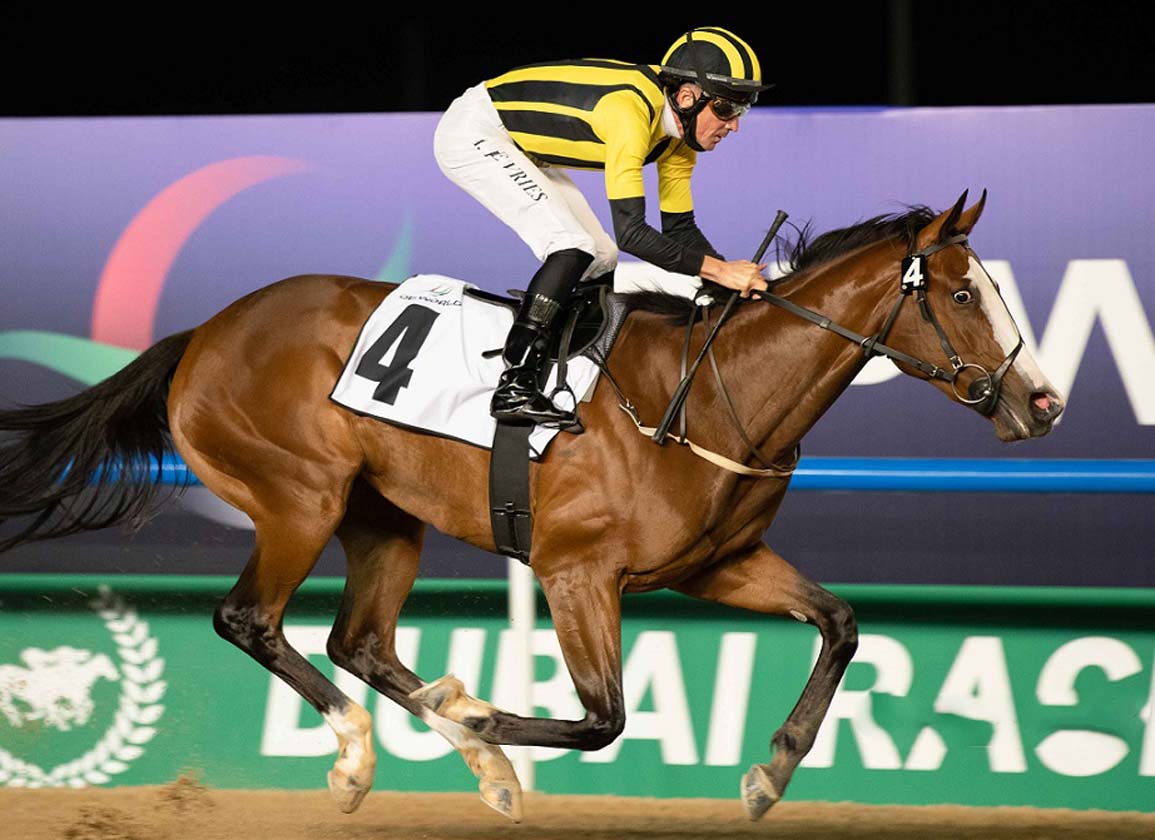 In a rare Meydan contest featuring no Godolphin representative, the broad-blazed Shahama (Munnings) kept her perfect record intact when cruising to a bloodless victory in the UAE 1000 Guineas.

The TDN Rising Star has now won all three of her starts at Meydan, following a nine-length opening strike on debut in early December and another facile win in the UAE 1000 Guineas Trial on New Year's Day.

From the widest draw in stall six, Shahama was initially taken to the back of the pack by Adrie de Vries but the pair swiftly made a sharp move down the back straight to cruise from last to second, with the eventual winner sitting cosily behind Minwah (Cupid) for a tow round the bend for home. Once in the straight de Vries had only to shake the reins to ask Shahama to pick up and swoop past the leader, and the jockey remained all but motionless as his impressive mount eased clear of the Doug Watson-trained Minwah, who stayed on for second, albeit almost four lengths adrift at the post. In a clean sweep for American-breds, Little Afrodite (Shackleford) was another 11 lengths back in third.

Trained by Fawzi Nass, Shahama looks a smart prospect for her Bahraini owners Shaikh Duaij and Shaikh Khalid Bin Hamad Al Khalifa of KHK Racing. Asked after the race on their plans for the filly, Shaikh Duaij told the Dubai Racing Channel that the G3 UAE Oaks is the likely next target for Shahama, with a potential shot at the G2 UAE Derby on Dubai World Cup night to follow.

Shahama's $425,000 price tag when bought by Fawzi Nass at the Ocala Spring breeze-up sale in Florida last April was no surprise as the SF Bloodstock-bred filly is a half-sister to the five-time Grade I winner and Ashford Stud sire Lookin At Lucky (Smart Strike) as well as the dual Grade II winner Kensei (Mr Greeley). Their dam, the dual 3-year-old winner Private Feeling (Belong To Me), is in turn a half-sister to GIII Pucker Up S. winner Grand Charmer (Lord Avie) and to the dam of champion 3-year-old Wait A While (Maria's Mon). The third dam Sharp Belle (Native Charger) won the GI Monmouth Oaks, while the further family includes Irish Derby winner Sir Harry Lewis (Alleged).

Private Feeling had no foal in 2020, but has a yearling colt by Catalina Cruiser and was covered last season by Tom's d'Etat, a Grade 1-winning son of Smart Strike.